One of Tokyo’s oldest neighbourhoods, Asakusa is famous for its downtown feel and Sensō-ji, Tokyo’s oldest temple, founded in the 7th Century. The neighbourhood is extremely popular with domestic and international tourists. It is a great place to stay and use as a base to explore the rest of Tokyo city.

We stayed at the Richmond Hotel Asakusa, conveniently located near Sensō-ji, lots of restaurants and shops, and three train stations (270m from Asakusa Station, Tsukuba Line, exit A1, which connects with the Yamanote Line that circles central Tokyo at Akihabara Station. 700m from Asakusa Station, on the Ginza Line and Tobu Skytree Line. 750m from Tawaramachi Station, on the Ginza Line).

The staff were so helpful and polite, the room was small but very comfortable, with a separate bathroom that had a shower over the bath, and the shared laundry facilities were convenient and spotless. We only ate breakfast at the hotel once, and it was a generous buffet with western and Japanese dishes.

We checked into the hotel, and were given an origami crane, then went up to our room, which had a view across the Sensō-ji grounds to Tokyo Skytree.

From the hotel, we set out to explore the temple area. We walked south on Hoppy-dori (west of the temple grounds) then east on Denboin-dori (south of the temple grounds) to Nakamise-dori (a shopping street that runs north – south ), which was quiet because the shops shut at 19:00, then south towards Kaminarimon (the first of two entrance gates) and then returned north to Sensō-ji, which was lit up and less crowded than it is during the day. 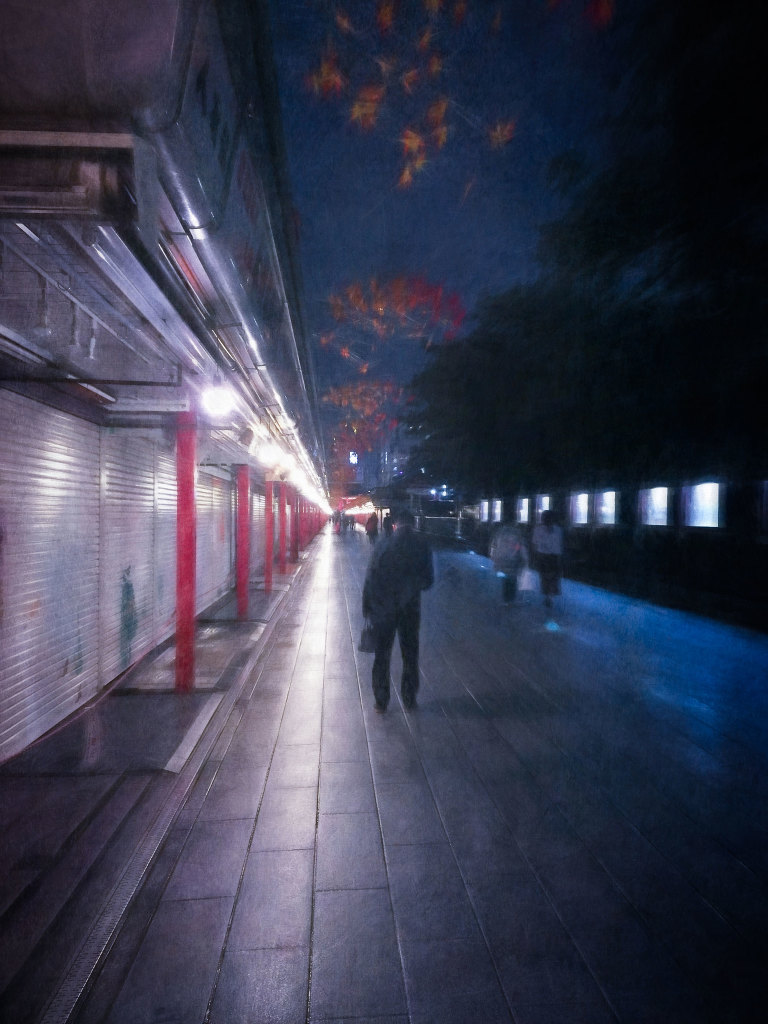 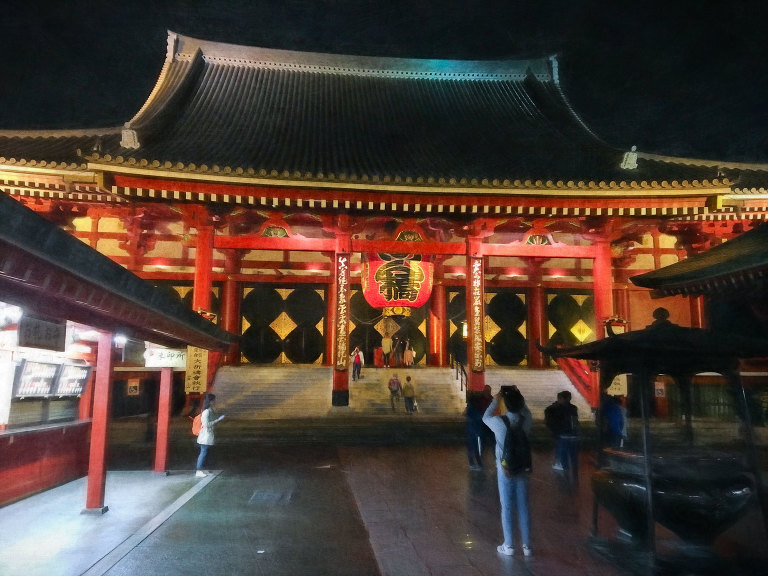 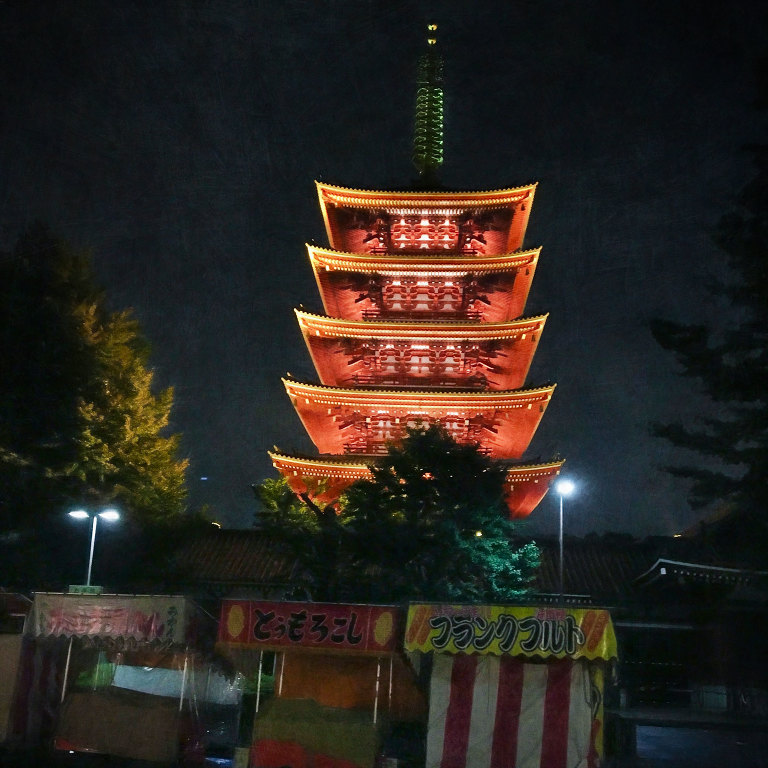 Pagoda with stalls in front shut for the night 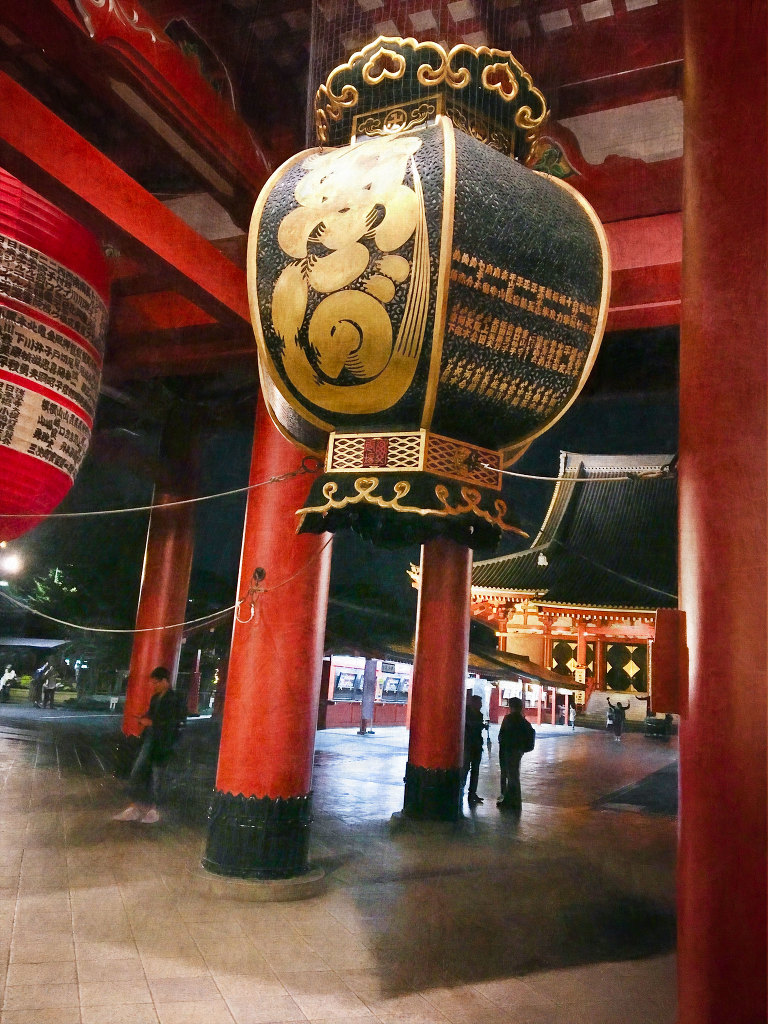 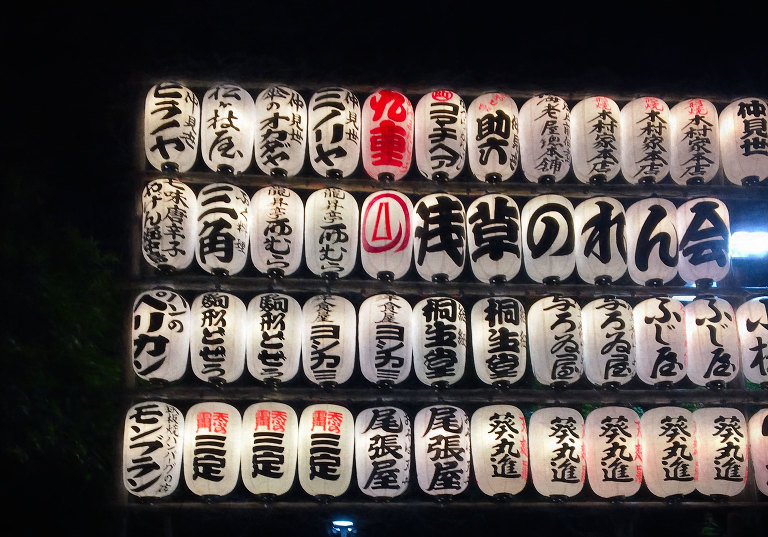 We returned to Hoppy-dori, which is lined with small izakaya (casual eateries that serve alcohol). We chose Okamoto, which had outdoor seating and a friendly atmosphere. The food was delicious: we shared a grilled fish set (simple grilled fish with grated daikon on the side) and ginger fried pork set (thinly sliced pork in delicious spicy sauce with chopped lettuce and a dollop of mayonnaise on the side) with rice, miso soup, and a pickled vegetable dish, and a bowl of Oden. Unfortunately we ate our food before remembering to photograph it, so the oden below is nearly finished! 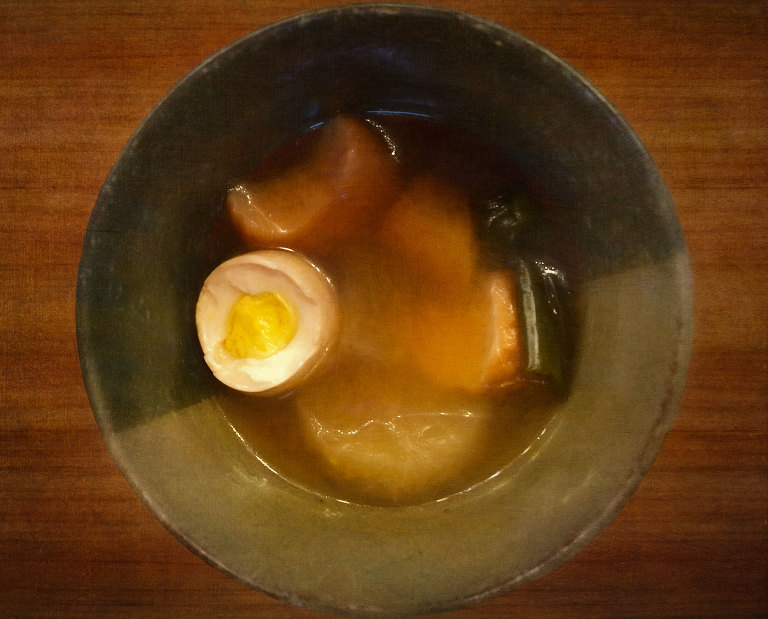 After dinner, we wandered around the area, enjoying the bustling atmosphere and developing a sense of the place, before dropping into Don Quijote (Donki), the gigantic discount convenience store, to buy nihonshu (sake) and snacks, to take back to our hotel room.

Opposite the Richmond Hotel is Marugoto Nippon, a beautiful modern shopping complex that showcases regional foods and traditional crafts from different prefectures across Japan. The first floor houses food stores; the second floor houses craft stores; the third floor has a resting area and visitors can have cooking lessons or visit exhibitions; the fourth floor houses a few restaurants where visitors can try different Japanese cuisines. We bought a packet of salted semi-dried orange segments by Fruveseel, and a cake with concentric circles of matcha, hazelnut, and sesame flavoured sponge.

The next morning, we woke in our quiet dark room, and opened the curtains to admire the view. In the shining wet streets below there were a few people walking or cycling, and over the the tree tops we could see the pagoda and Sensō-ji and the buildings to the river, and the Tokyo Skytree on the other side. 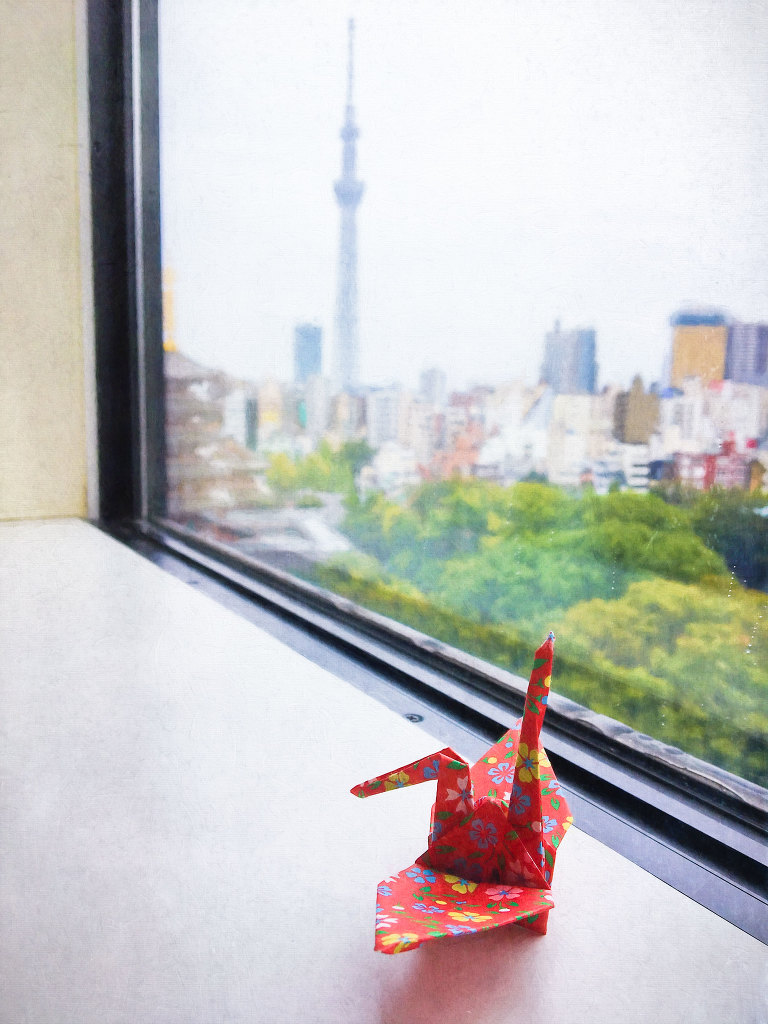 Origami crane and view over Asakusa to Tokyo Skytree

We finished unpacking and finding places to store things in the small room (which seemed ample compared to later hotel rooms), then dressed and set out for a day of sightseeing. 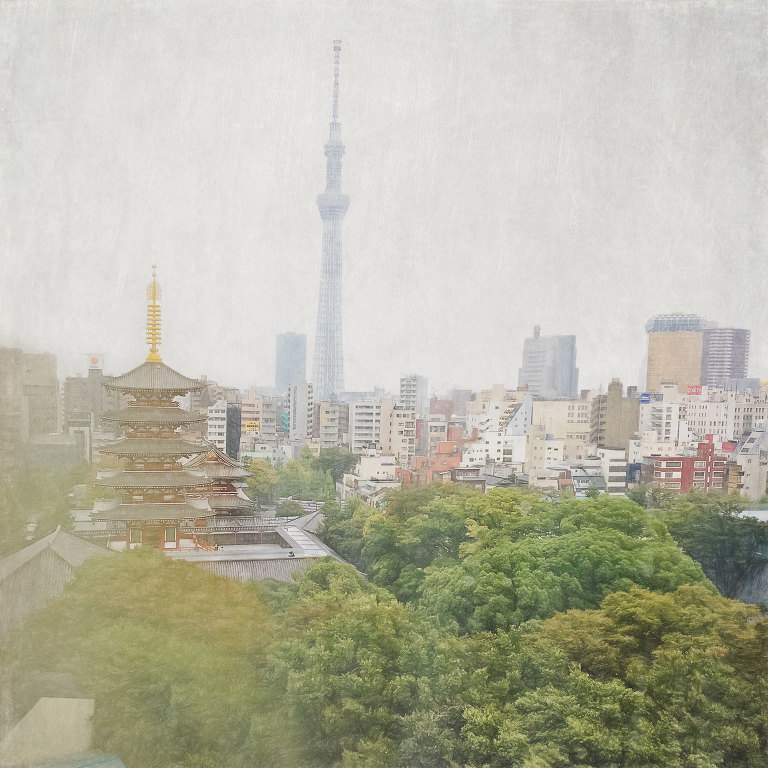 For breakfast, we went to find Asakusa Kagetsudo Honten, the bakery renowned for making melon-pan, a type of fluffy sweet bread, since 1945 (open daily, from 9:00am until sold out). Through the covered shopping arcade next to the Richmond Hotel, the aroma of the sweet melon-pan guided us. We bought one plain and one filled with matcha ice cream. The shop had a bench where people could sit to eat, and shelves with beautiful traditional craft pieces lined the walls – my younger self would have been in a shopping frenzy; now I simply (and profoundly) admired the design sense, beauty, and whimsical humour that I saw, every step I took in Tokyo.

We walked through the temple compound, and across the road from Sensō-ji Kaminarimon Gate to the Asakusa Culture and Tourist Information Center, open 9:00-20:00. It’s a fascinating building, designed by architect Kengo Kuma. The rooftop restaurant and restroom overlook the whole Sensō-ji temple area.

Inside, there were displays from local Matsuri (festivals). 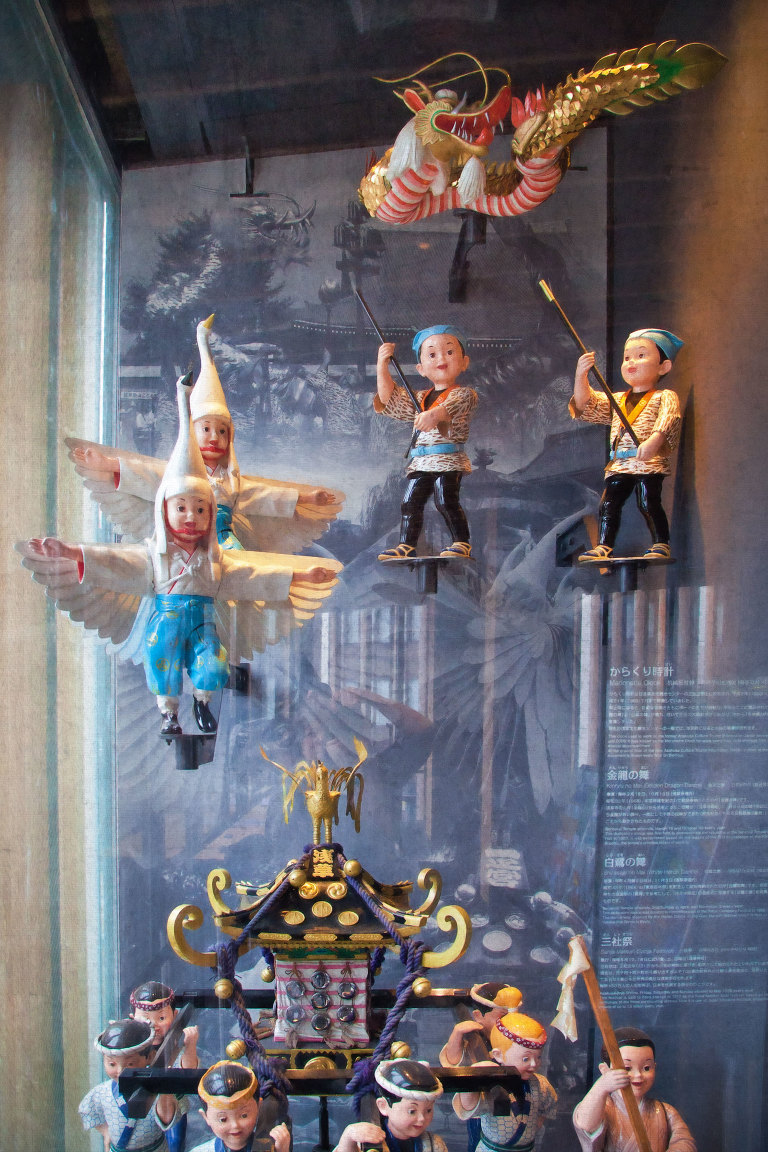 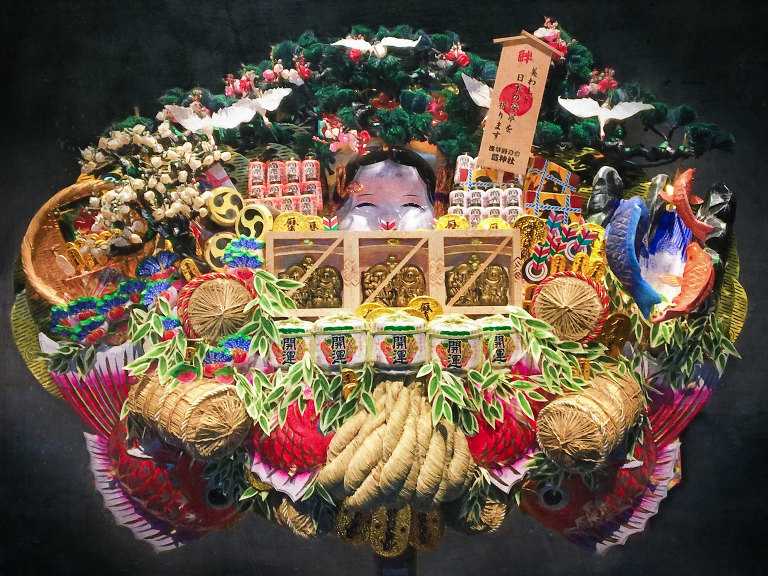 Decorated rake for Tori No Ichi

From the slat-covered windows, we looked down over the busy street crossing below with rickshaw men offering tourists rides. 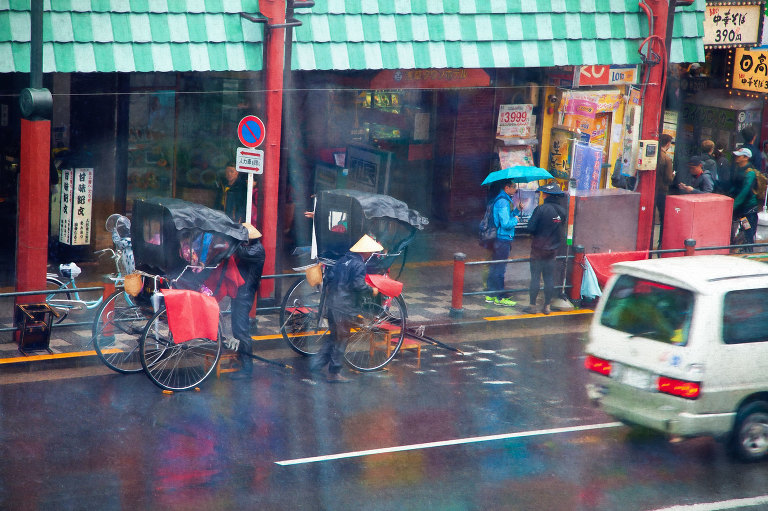 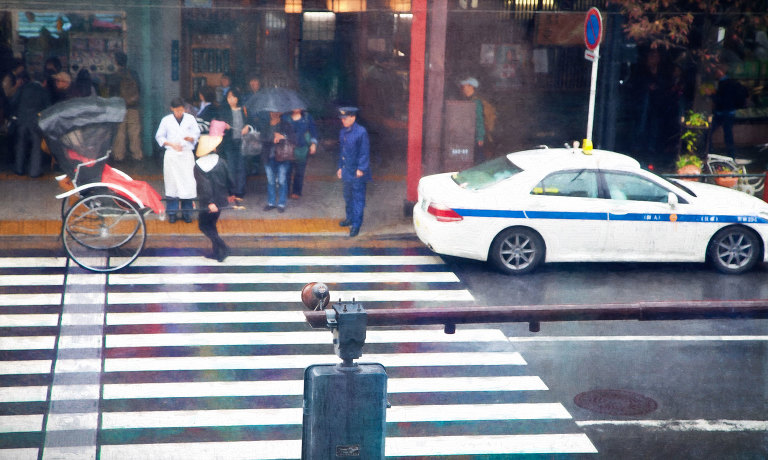 Inside the tourist centre, I was impressed by a man seated on the floor beside a low table who was working with scissors and glue on an elaborate scrap book with stamps and pamphlets and mementos – he had a beautiful bag to keep his supplies in.

We watched a shamisen (Japanese three-stringed guitar) performance and class.

Then we returned to Sensō-ji. In the temple grounds, you can purchase an O-mikuji, or a paper with a ‘fortune’ written on it, for ¥100. Sensō-ji has a reputation for a higher-than-usual percentage of ‘bad fortunes’ compared with other temples. Brad received an extremely positive fortune. I hoped I wouldn’t, because I wanted to tie the O-mikuji to the wires in the temple grounds, but I didn’t want to do that if it was a positive fortune. Nonetheless, it felt ominous that I couldn’t shake out a stick with the fortune number when everyone else seemed to do it easily. I was stunned by the description of loss and grief.

No 100 BAD FORTUNE
Your happiness in the past was hidden among the clouds, like you lost all your dependence.
Going over a mountain with a harp means that have hidden yourself from the world.
If you can’t meet a hermit, after climbing up mountains, you will not feel yourself at ease.
You will be completely at a loss with your empty heart.
Your wish will be hard to realise. The sick person is hopeless. The lost article will not be found.
The person you are waiting for will not come.  It is bad to build a new house or to remove. It is bad to make a trip.
Both marriage and employment are bad.

I shed a few tears. Brad was upset for me, but I explained that it felt true, with Toby’s death, and I would tie up my bad fortune at Sensō-ji. (Thankfully, Brad’s O-mikuji said marriage was good and it was good to make a trip!)

I folded and tied up the O-mikuji, and then I bought some incense, and asked for guidance from a woman at the brassiere who was touching her incense to heated metal. She guided me to a roofed container with sand in it where the incense sticks were left. You can waft or scoop the smoke over yourself. Then we went into the temple, where I bought a cloth-covered book of concertina pages called a goshuinchō or shuinchō and queued to wait for the monk calligrapher. I selected which shuin (朱印) seal I wanted from the ones available (I wanted to say all of them, but I didn’t want to expose my uncouth greediness).

On our way to Amuse Museum, we took a wrong turn which luckily brought us to Kototoi-dori where I noticed the green flags outside Suzukien, a 150-year-old tea house that sells a wide variety of teas. They also sell Nanaya brand gelato, which is extremely popular, judging by the long queues always outside the shop. The gelato comes in multiple tempting flavours and seven levels of strength of matcha. We ordered Premium No.7 matcha and black sesame – both delicious and intensely rich flavours. On a second visit, we tasted brown rice flavoured gelato – also delicious.

Amuse Museum houses a permanent collection of boro – patched and mended fabric, sometimes handed down in families over generations and used as birthing bedding to provide the newborn a sense of belonging and history. I admire textiles, patches, embroidery, and frugality, so it was a great place to visit. I found the boro soulful.

The building contains a bar on the sixth floor, café on the first floor, space for traditional dance and shamisen performances, and theatre space, which exhibits historical images of Asakusa. It is open from 10:00-18:00, last admission 17:30; closed Monday; admission ¥1080. 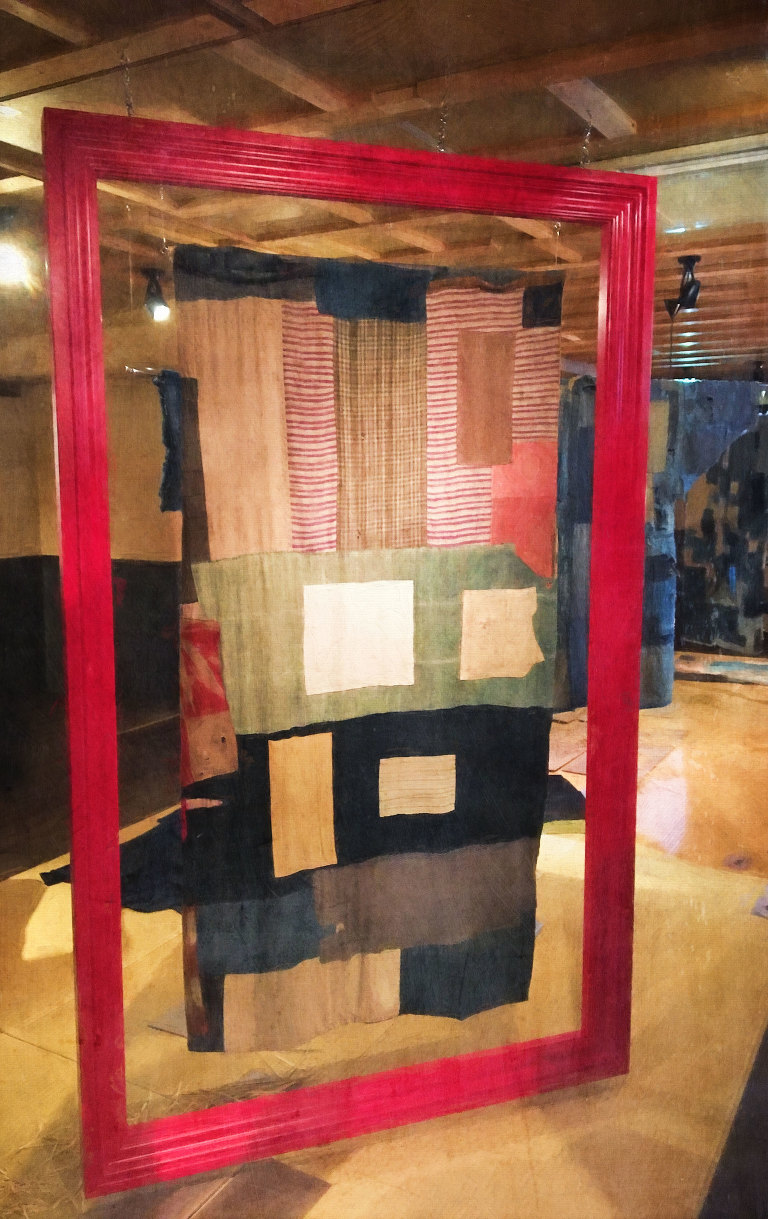 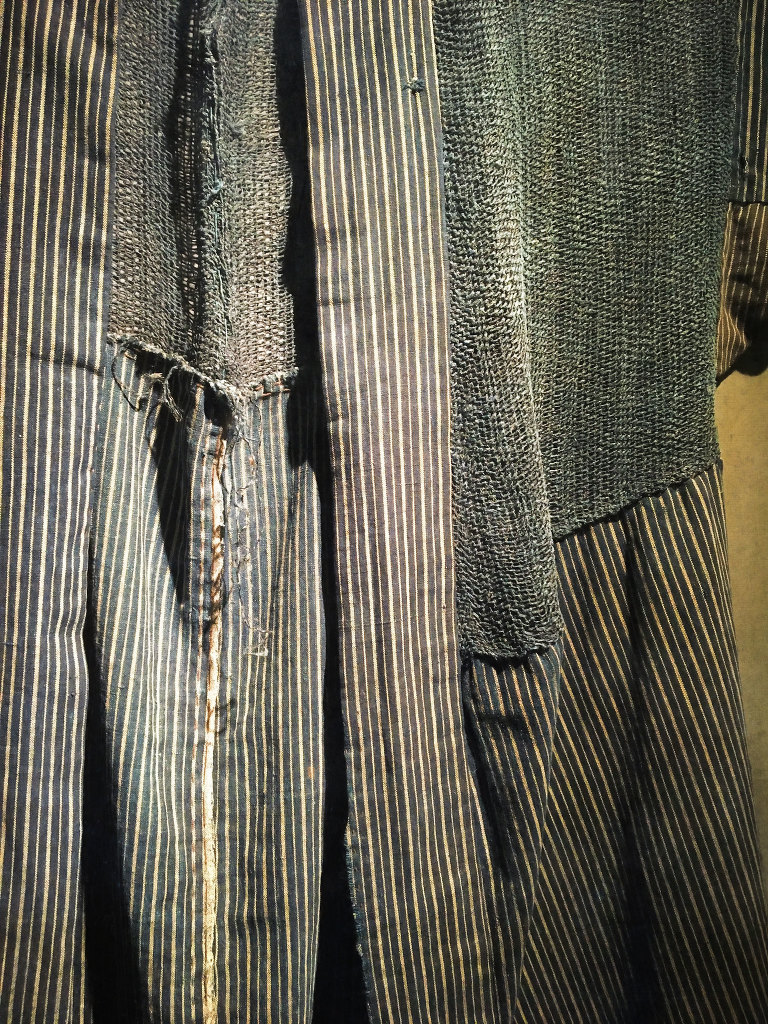 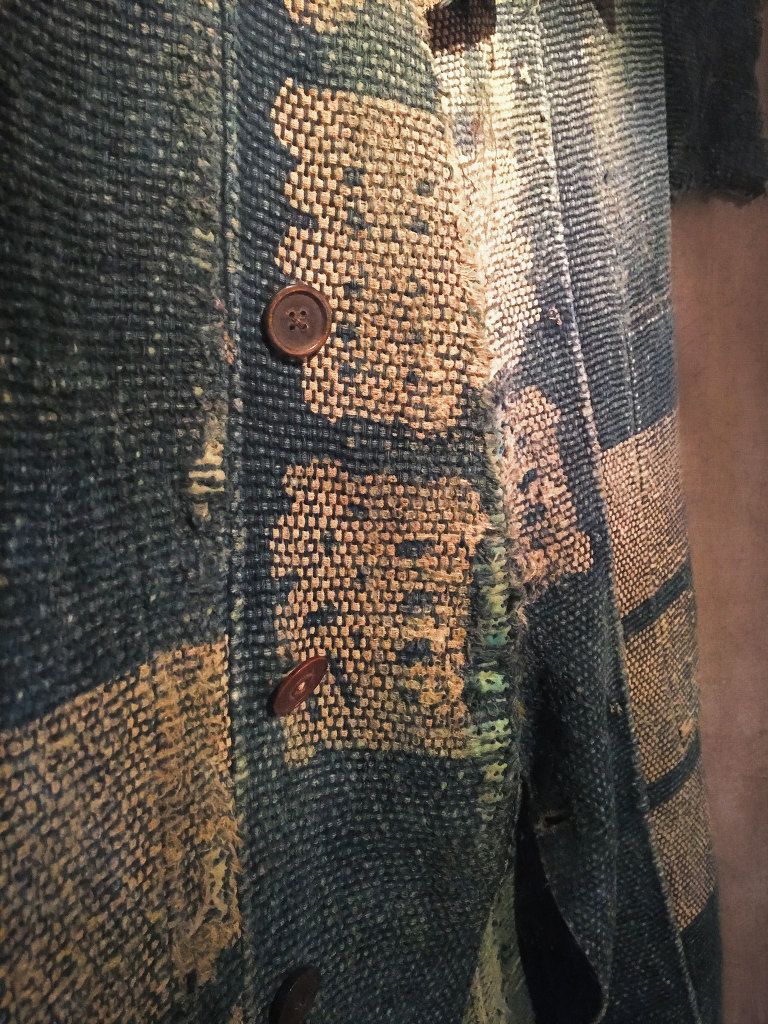 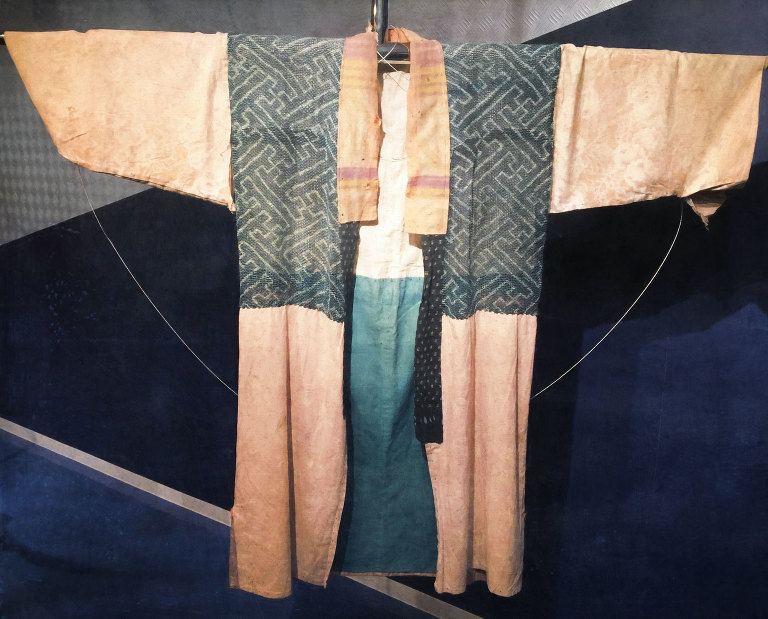 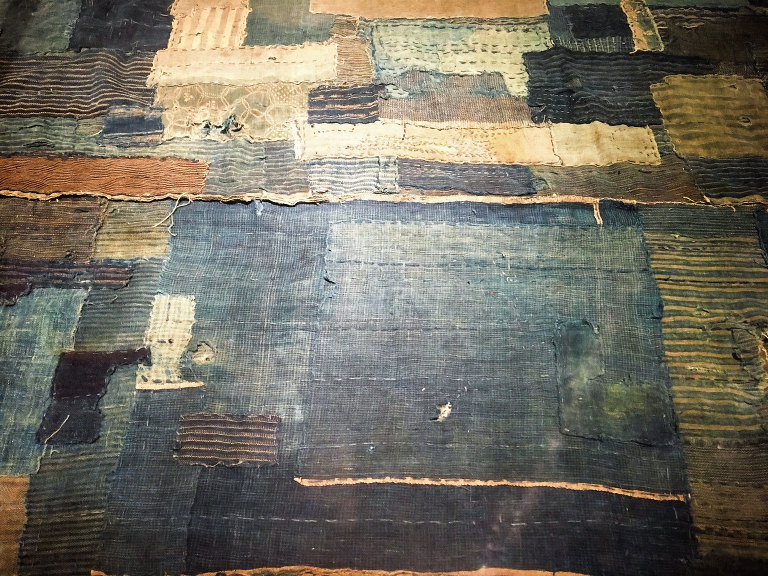 After leaving Amuse Museum, we ate a tasty meal of soup with sendei (rice crackers) and naruto kamaboko (fish cake with a pink spiral) in a tiny store in the alley of shops, parallel with the much busier Nakamise-dori in the Sensō-ji grounds.

From Asakusa Station (Ginza Line) it is two stops to Ueno Station, from where we crossed the road and walked into Ueno Park, open 9.30-17:00 (last admission at 16:00). We visited a temple and I collected another shuin.

The building was really imposing. Outside the museum, there were locking cages for umbrellas (an important consideration in wet weather!). 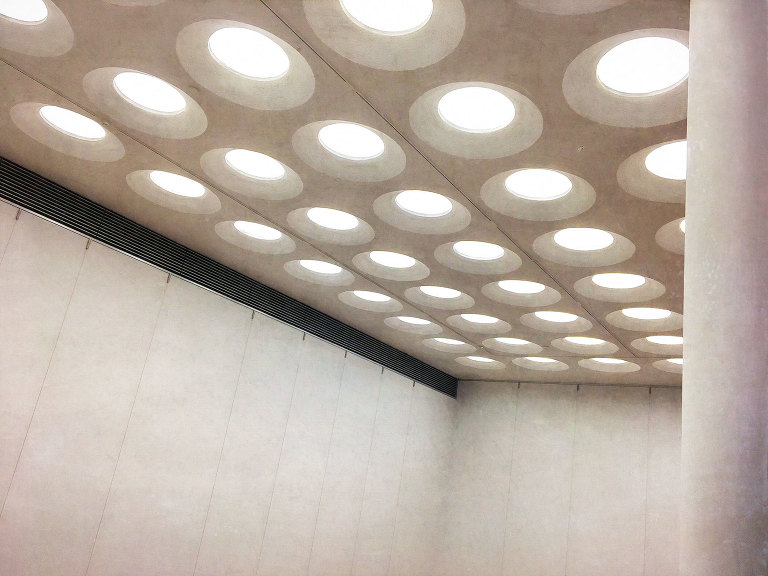 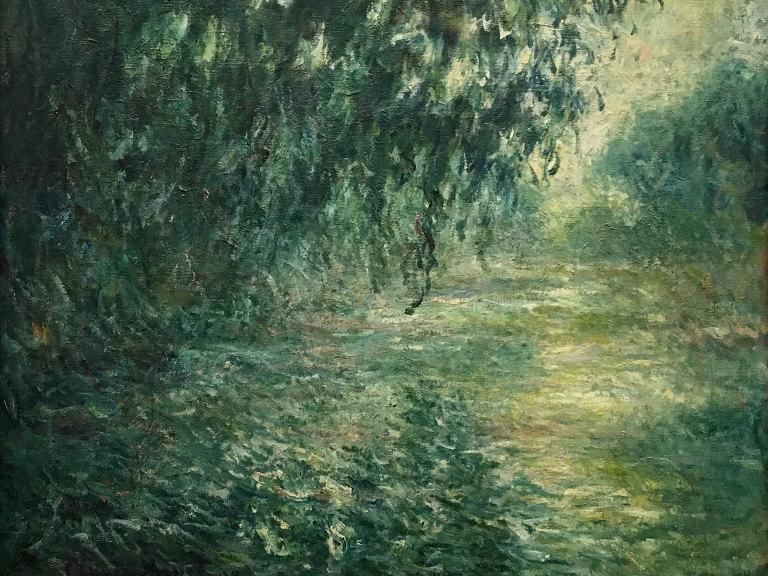 Claude Monet – Morning on the Seine 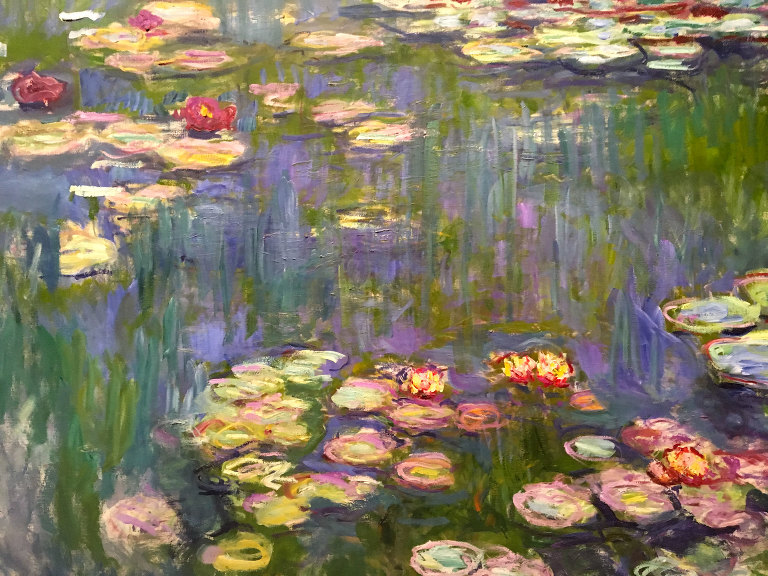 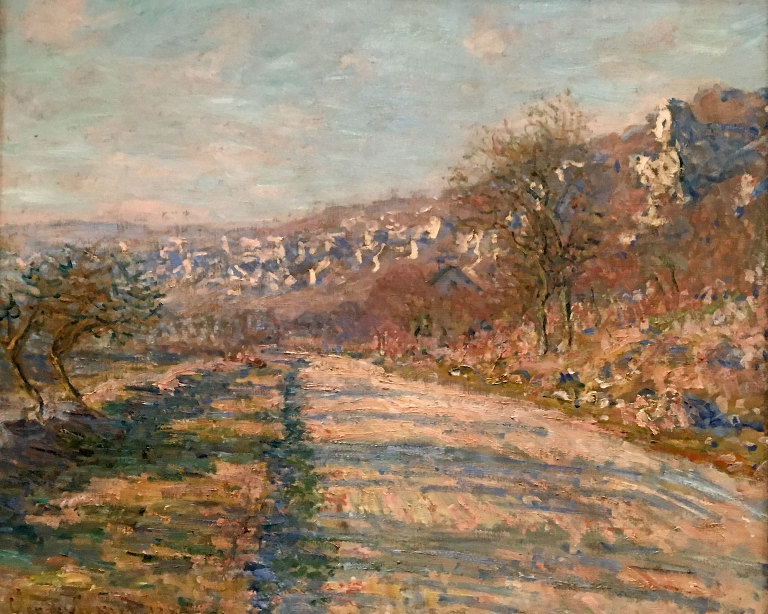 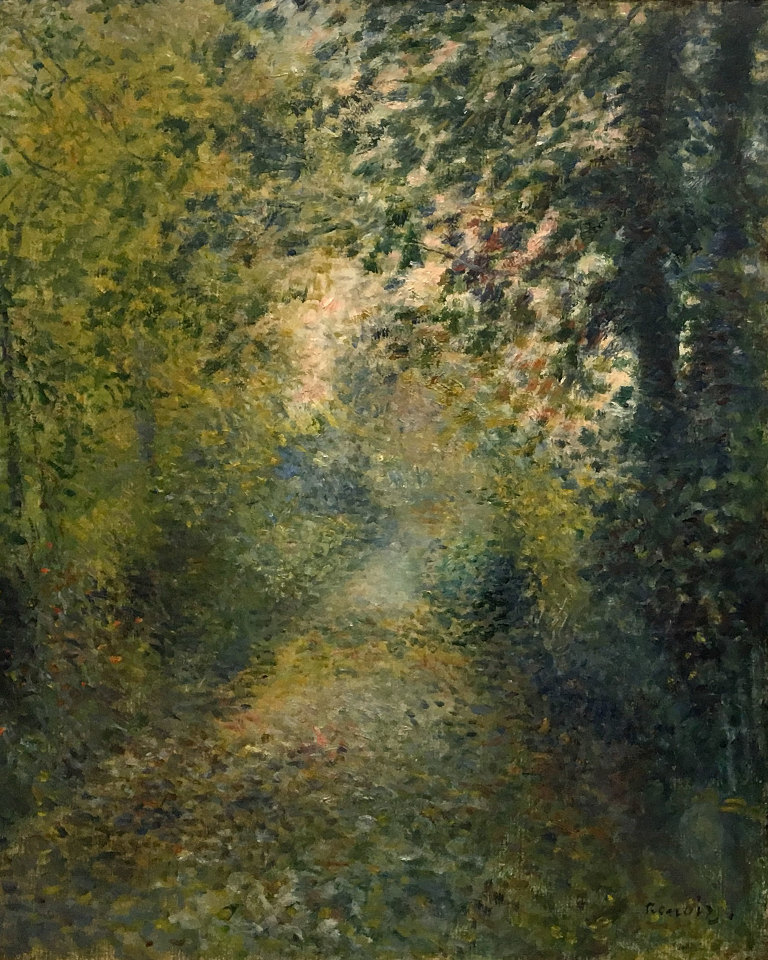 Pierre-August Renoir – In the Woods 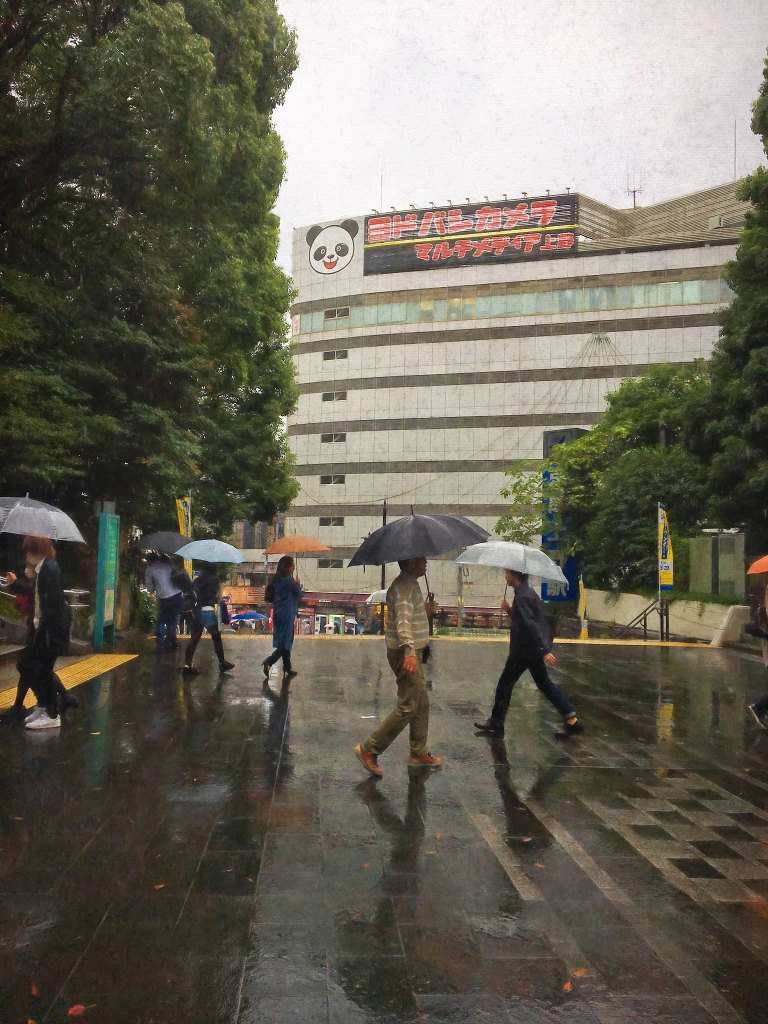 We returned to a street beside the raised railway line near Ueno station and agreed to try a ‘tendon’ restaurant (tempura with rice, miso soup, really cold strong sencha tea, and tempura fig), then caught the train to Asakusa Station (Ginza line), and without expectation found ourselves in the oldest underground shōtengai, or covered shopping district, in Tokyo as we came out of the station. Brad saw a small shop and suggested we go in – there were books for stamps, so I bought one. We walked back to the hotel through the temple grounds. After all the walking we did, it was so enjoyable to take a hot bath and relax.