We returned to Tokyo, for an afternoon, night, and full day before flying out from Haneda Airport. We stayed in Tsukiji near the famous fish and produce market.

On our first afternoon, we visited nearby Tennozu Isle, partly to find out more about the Tokyo Monorail, which we would catch to Haneda Airport the next day.

Tennozu Isle is a waterfront district of Tokyo, with repurposed warehouses, interesting modern shops and galleries, cafes, restaurants, and bars.

First we visited Pigment, an art supply shop, about 210m walk from the Tennozu Isle Station, at 2-5-5 Higashi-Shinagawa, Shinagawa-ku, Tokyo. It is open from 11:00-20:00, closed on Mondays and Thursdays. Pigment is like a lolly shop for the eyes, with shelves full of shiny glass jars filled with the most beautiful rainbow of powdered pigments. The shop looks fairly unassuming from the outside, but the interior was designed by architect Kengo Kuma, who also designed the tourist centre in Asakusa, Tokyo. 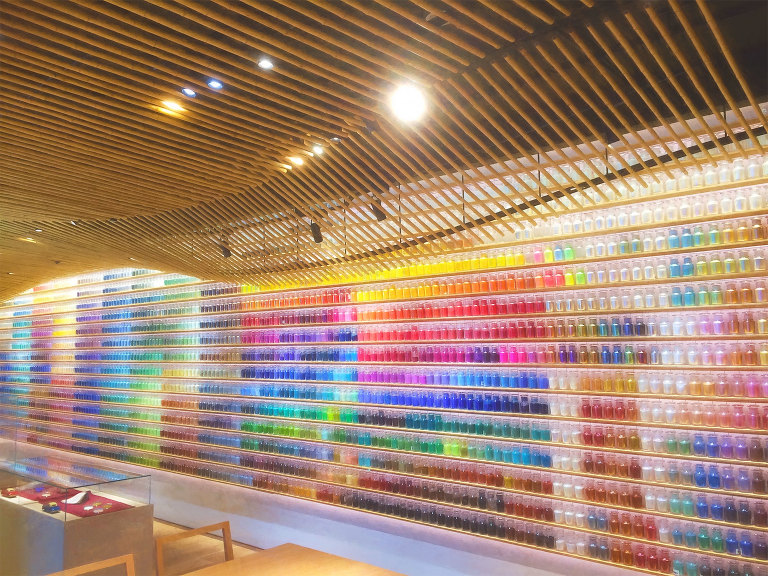 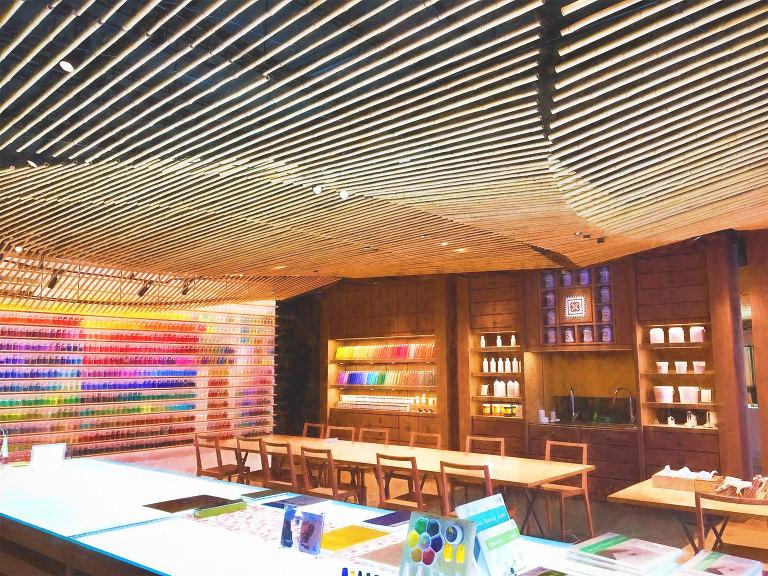 Pigment store ceiling and tables in front of shelves 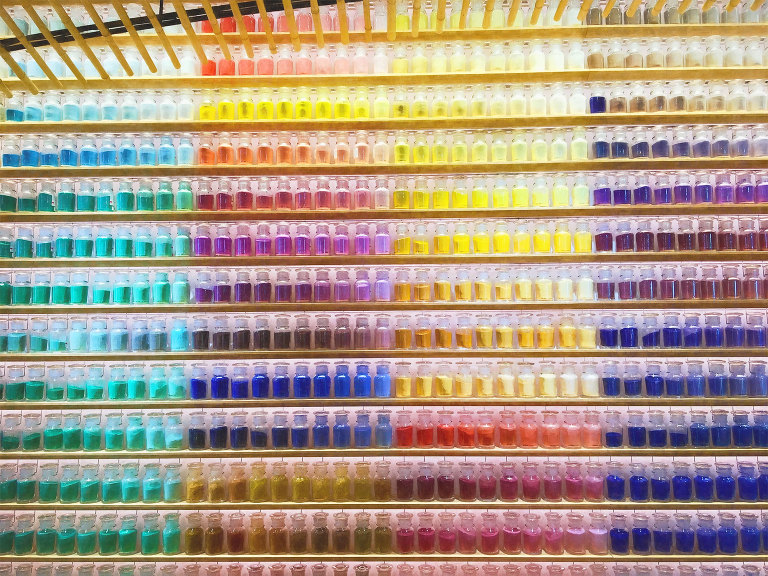 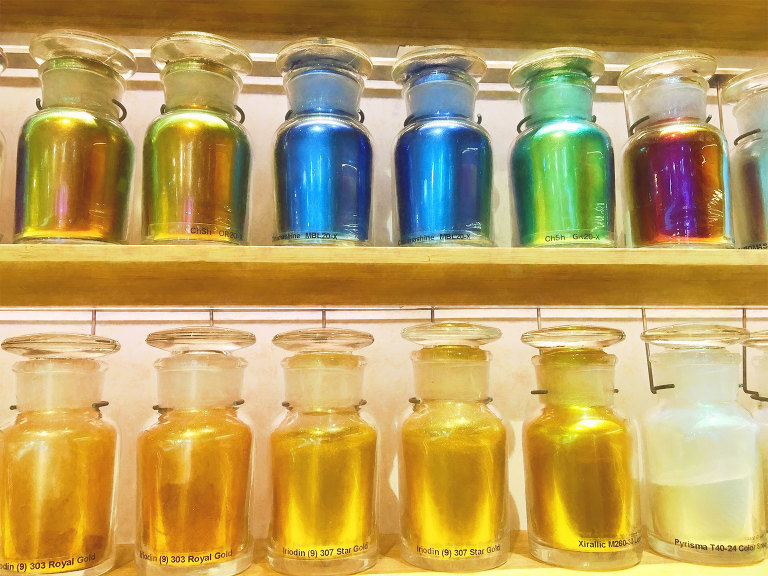 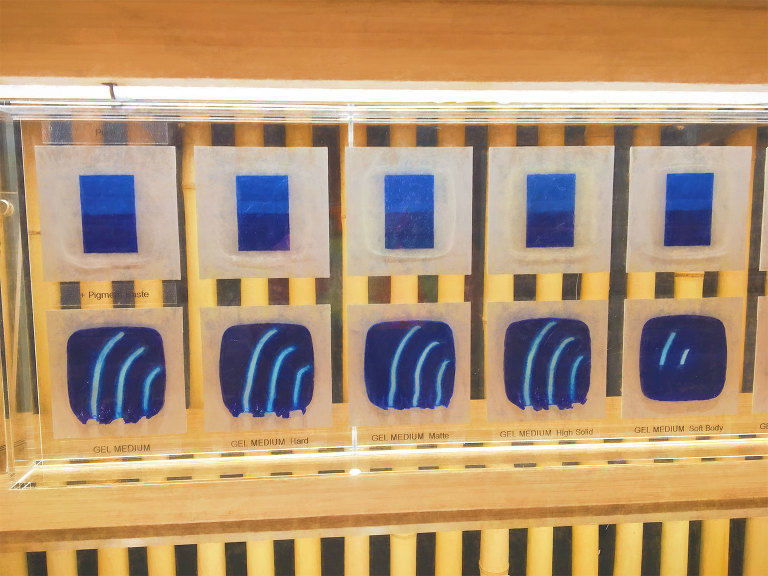 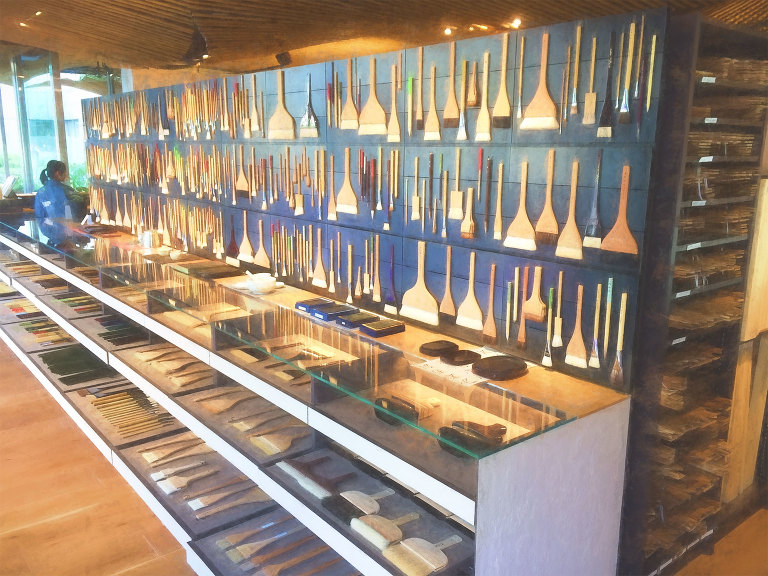 Wall of brushes and ink stones

Next we walked to Archi-Depot, which houses architectural models. It is open 11:00-20:00; ¥2,000pp. This is a clever business model: charge the architects to store their models and charge the public to view them. I think the entrance fee is a bit expensive, but – if you are interested in architecture – the exhibits are really interesting. 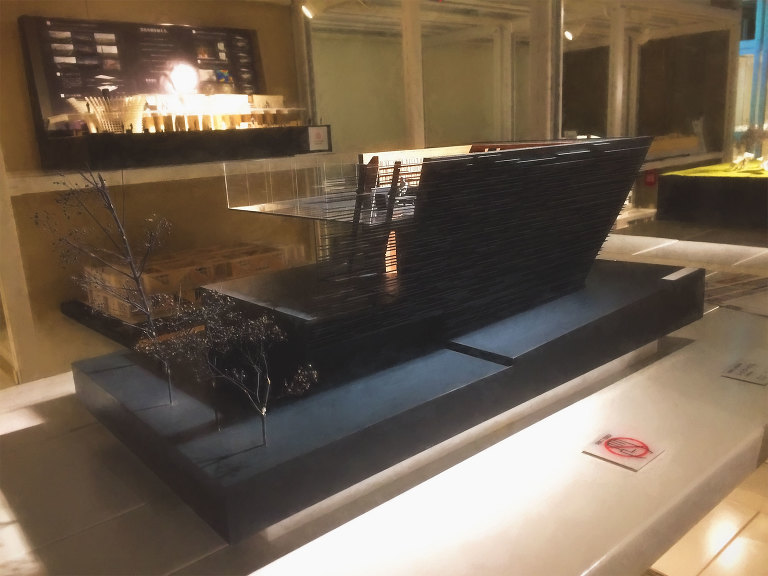 Model of Lake House by Kengo Kuma at Archi-Depot 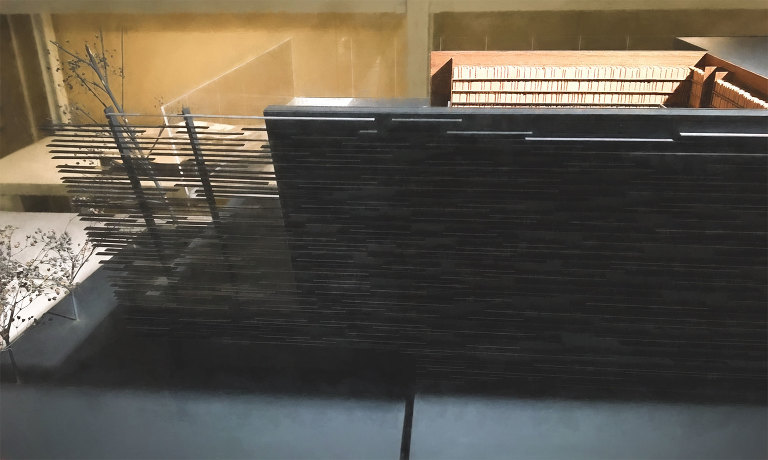 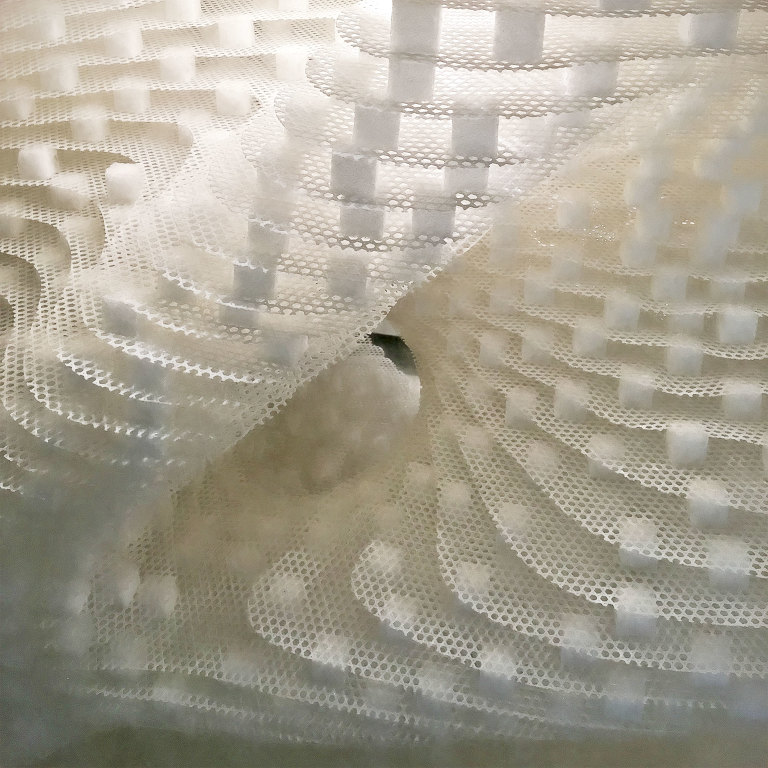 Then we stopped at Slow House for a snack and drink.

As we walked around the area of canals, boardwalks, and bridges, we happened upon a canal gallery of beautiful cars from the Classic Car Club of Japan. 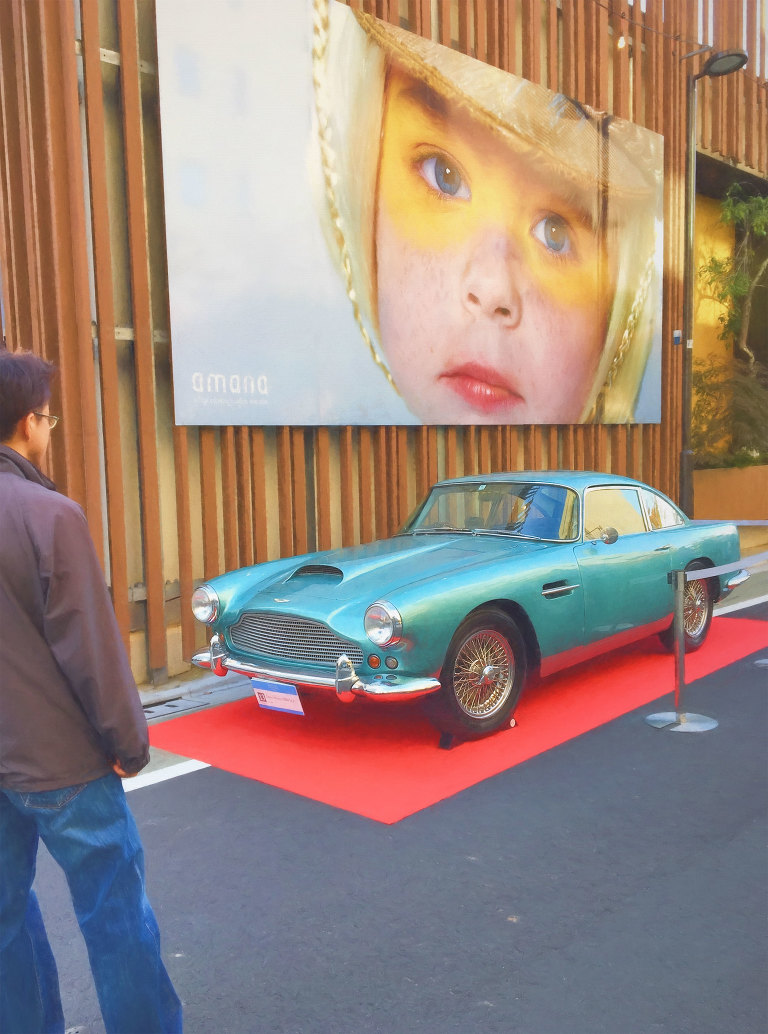 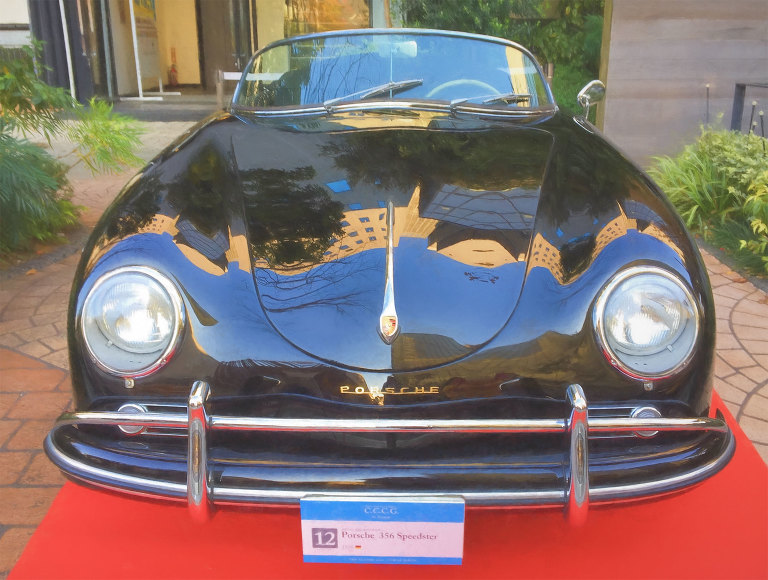 We enjoyed food in the market stalls and restaurants in the outside markets but didn’t visit the inner markets.

A highlight of our trip was watching Kabuki on our last day in Japan. We booked tickets to a full Kabuki performance before we left Australia.

We walked from our hotel to the nearby Kabuki-za, in the Ginza district of Tokyo for the matinee session. Collected our tickets, rented a translator device (a tablet with written translation for ¥500, with ¥1000 deposit), then found our seats, on the third floor. The theatre is impressive with a very bold red, green, and black striped curtain. No photography is allowed.

Kabuki is a very stylised form of theatre. I don’t pretend to understand it, but I really enjoyed the performances we saw, and it was fascinating to watch how the audience interacted with the performers, calling out the names of favourite performers when they appeared or did something the audience particularly liked (in contrast to the very quiet cinema audience we were amazed by in Kyoto).

In the audience, elegant men and women were dressed in traditional kimono, with cloth-wrapped boxes of food to eat during intermission.

We were fortunate that the program included three plays (or acts from different plays), each very different. It was difficult to pick a favourite.

Koi Tsukami (Fight With a Carp) was very dramatic and energetic. The koi’s costume and the choreography of the fight were really clever.

Yuki no yūbe iriya no azemichi – Não samurai (The Snowy Road Through the Rice Fields of Iriya) which is the most naturalistic, set in a soba noodle shop.

After the performance we ate our last meal in Tokyo before picking up our luggage, which we left at the hotel, and catching the Tokyo Monorail to Hameda Airport.