As we were leaving Kyoto for only a single night, and we wanted to travel light, we forwarded our luggage to our next hotel in Kyoto before checking out of Kyoto Itoya Hotel, so it would be waiting for us at Gion Minami House when we returned. We took a small overnight bag with us to Hiroshima and Miyajima.

We walked to the Gojo subway station and squeezed into the crowded local train to Kyoto Station for the Hikari 493 Shinkansen to Hiroshima (about 360km, 1 hour 40 minutes). We felt as though we were finally getting the hang of the Japanese trains, stations, platforms, unreserved, and non-smoking Shinkansen cars.

We arrived at Hiroshima Station before 9:00, and were met by very friendly and helpful local volunteers who assisted us to to leave our overnight bag in a coin operated locker (and suggested we photograph the location so we could find it on our return). It was such a lovely way to be welcomed to a new city – we really appreciated it. We caught a bus to the Peace Memorial Museum (open 8:30-18:00, entry ¥200) and it was already very crowded. 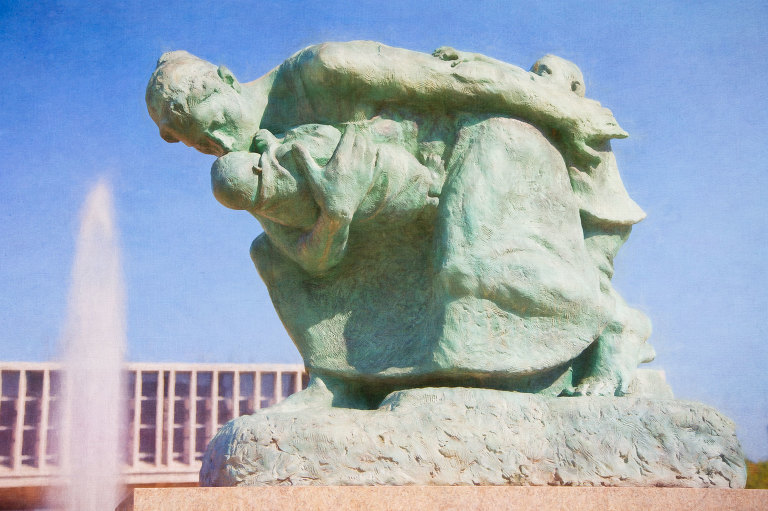 We allowed about 90 minutes to explore the museum.

The museum had a very powerful photographic exhibit showing Hiroshima from above: before, during, and after the atomic bomb blast. We watched it several times because it is so hard to comprehend the power of the blast and the obliteration of a city within seconds.

The whole museum contains information about the negative impact of atomic weapons, and is matter-of-fact and sombre but not accusatory (although some people seem to experience it that way). Part of the museum contains objects retrieved after the bomb, like a child’s tricycle, and items of clothing, with stories and photos of the people who owned them. I found those exhibits emotionally confronting and upsetting, and left the museum to get some air. Outside it was such a beautiful day, it felt surreal. I’m very glad we visited the museum and I would visit again – the message about the destructive power of nuclear weapons is important.

We walked north across the Peace Memorial Park filled with beautiful trees, toward the Cenotaph for A-Bomb Victims, the Flame of Peace, and Reflecting Pool. As we walked, I became aware of a few people who may have been old enough to have been alive at the time of the bomb, which brought awareness of its impact into the present for me – there are thousands of survivors living with the ongoing effects of the blast and radiation. 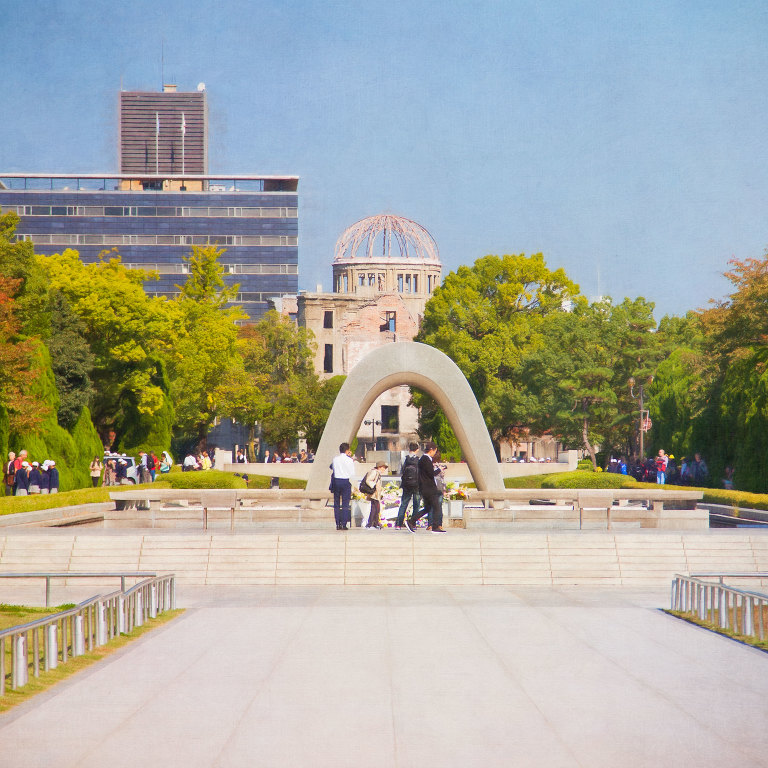 Cenotaph for A-Bomb Victims, with the Flame of Peace in the Reflecting Pool visible behind

We continued walking to the Children’s Peace Monument, which is topped by a statue of Sasaki Sadako, a child who developed leukaemia as a result of atomic radiation. Sasaki Sadako folded 1,000 origami cranes in the hope that folding them would save her life. In her memory, and as a symbol of hope for peace, strings of origami cranes from around the world are housed in glass booths in a semicircle behind the monument. 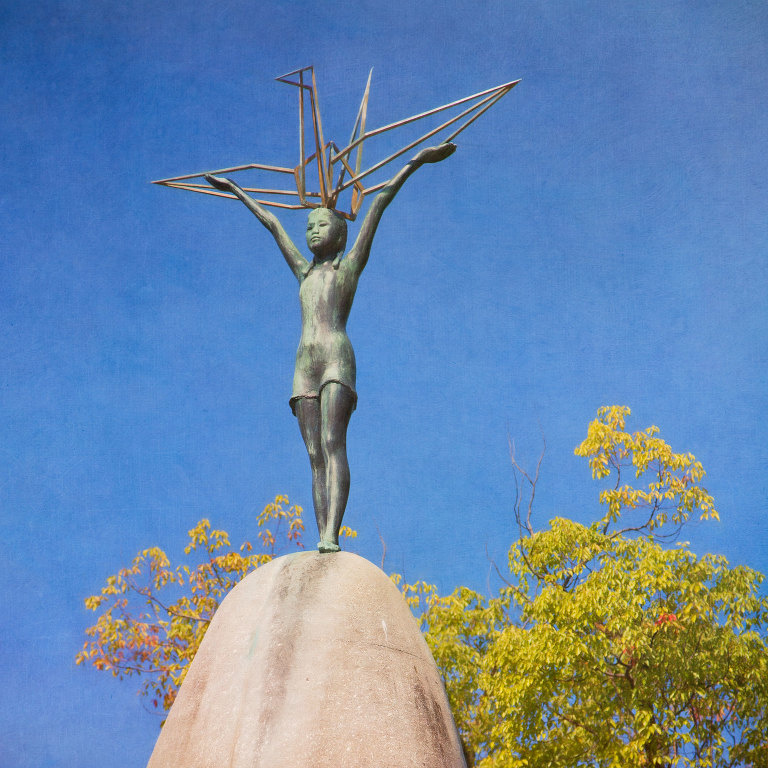 In front of the monument, groups of school children waited in turn to address the statue of Sasaki Sadako. I found their emotional delivery moving. 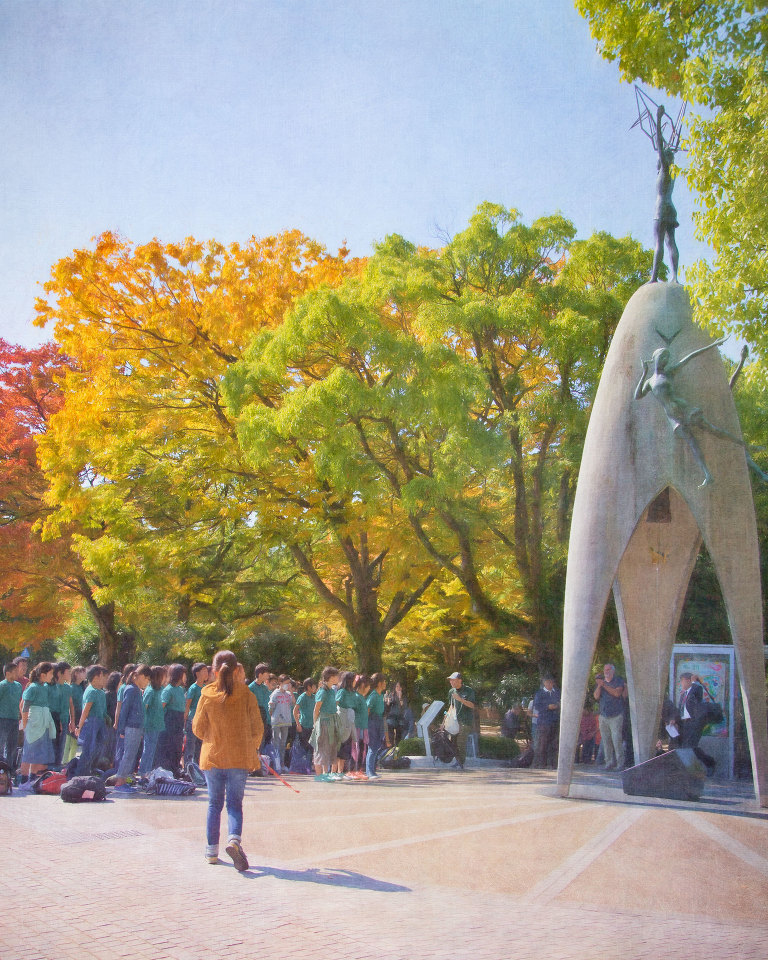 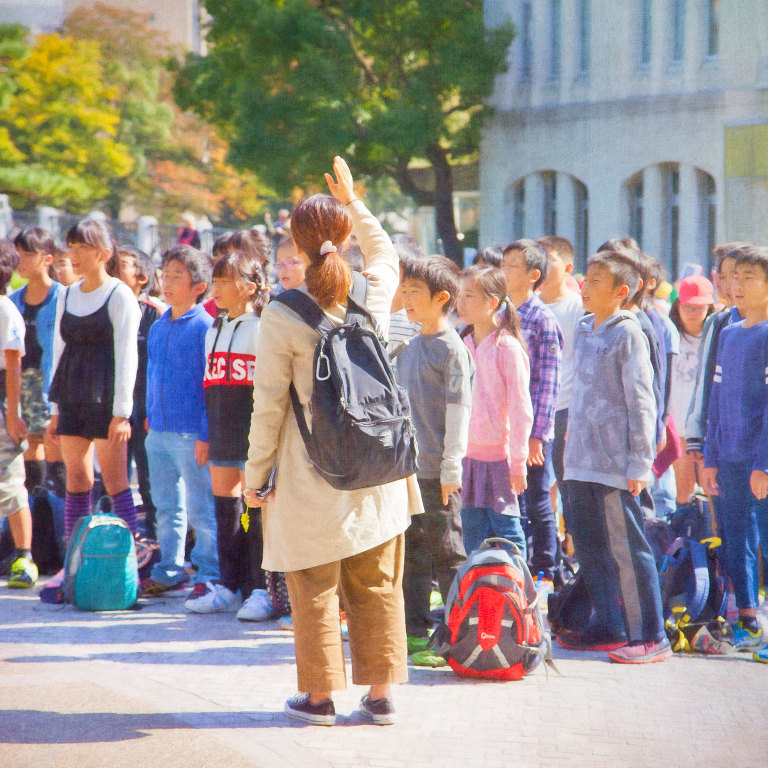 The Genbaku-domu-mae (A-Bomb Dome) is a sombre reminder of the blast. 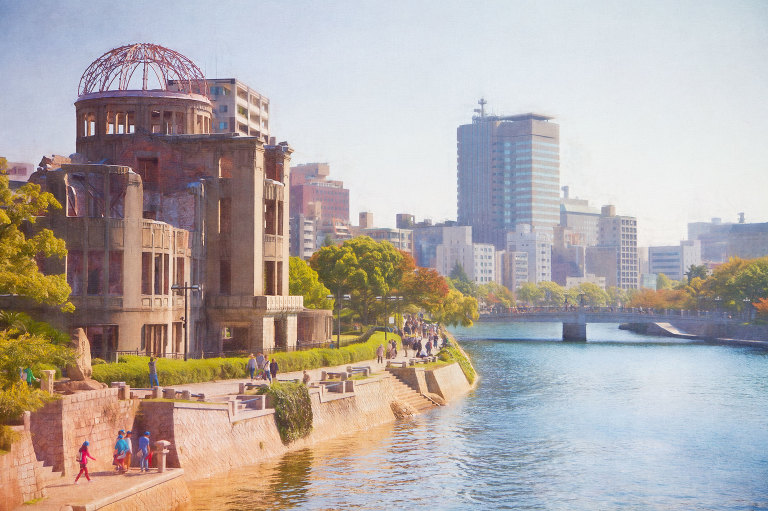 To try tsukemen (cold ramen with salad vegetables, such as cucumber and cabbage, sliced cold roast pork, and spicy chili dipping sauce, ¥999), we sought out Reimenya a popular restaurant with locals. It was difficult to find because the location shown on Google maps was around the corner. We found the restaurant by accident, after we’d given up hope and were heading back toward the station, I recognised the yellow noren curtains at the front door from photos I had seen. Luckily we got a seat at the counter, but the restaurant filled quickly and by the time we finished our meals, all the waiting seats were full. The cool fresh tasty meal was light but filling – perfect for a warm day.

On the way back to Hiroshima Station, we discovered that Suica pre-paid cards are not accepted on Hiroshima buses, which take their own card.

From Hiroshima Station, we caught JR Sanyo Line to Miyajimaguchi Station (26 minutes, ¥410), and then walked down the street directly outside the station to the ferry pier, to catch the JR Miyajima Ferry (10 minutes, ¥180).

Miyajima is 16km from Hiroshima – the brief comfortable ferry ride allowed a view of the mountains sloping steeply into the water reminding me of Chinese and Japanese paintings. 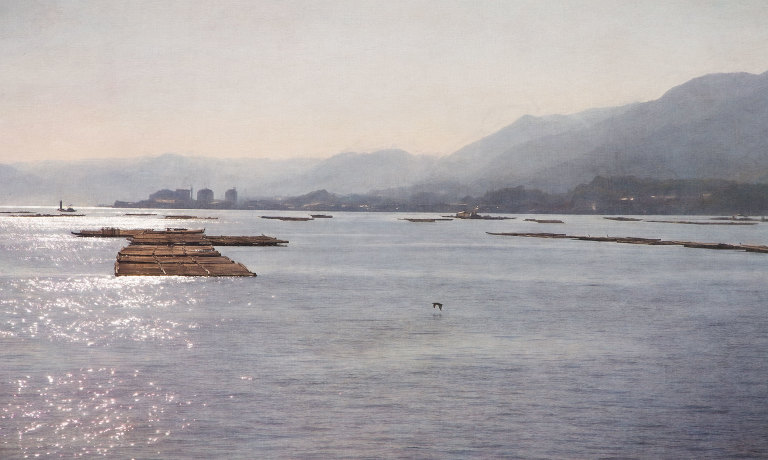 The island is about 30 kilometres square in size, with a  village located behind the world heritage site of Itsukushima, the large Shinto shrine built over the water, off the shore of the island. We timed our arrival to coincide with high tide so the giant O-torii gate would be surrounded by water. 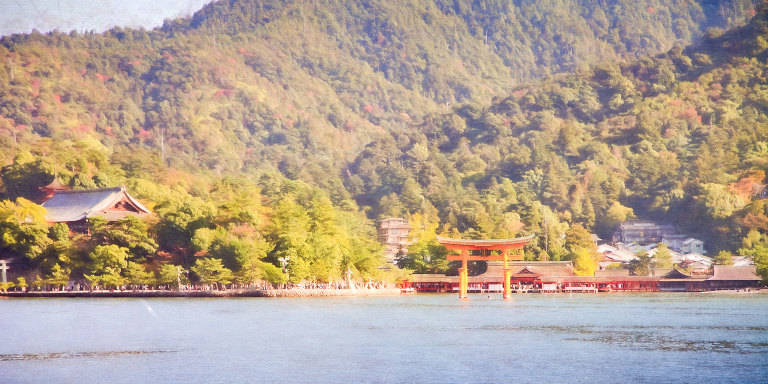 Miyajima from the ferry

When we disembarked from the ferry, it was unpleasantly crowded, but a hotel shuttle bus was waiting outside the ferry terminal, and it took us to our hotel through the steep winding back streets and lush vegetation.

We were so fortunate to stay at Miyajima Grand Hotel Arimoto because we found a special deal for one night only and arranged the rest of our time in Kyoto around its availability. Despite the special deal, it cost more than we would usually pay for a hotel, but it was worth spending the money to experience the wonderful hospitality and food, as well as the view over Itsukushima and convenient proximity to the village and bus to the Miyajima Ropeway to the summit of Mount Misen. After check-in, a hostess showed us to our room and served tea with a local treat: momiji mangu (maple-leaf-shaped cake filled with sweet bean paste). The room was large and beautiful, with tatami mats and a low table and seats, in the Japanese style, and a Western king-size bed facing the window wall that overlooked the shrine.

We caught the bus to the ropeway and spent some time admiring the views from Mount Misen as the sun began to set. We took heed of the warnings to make sure we returned to the ropeway well before the last gondola left because we did not want to walk down the mountain in the dark. 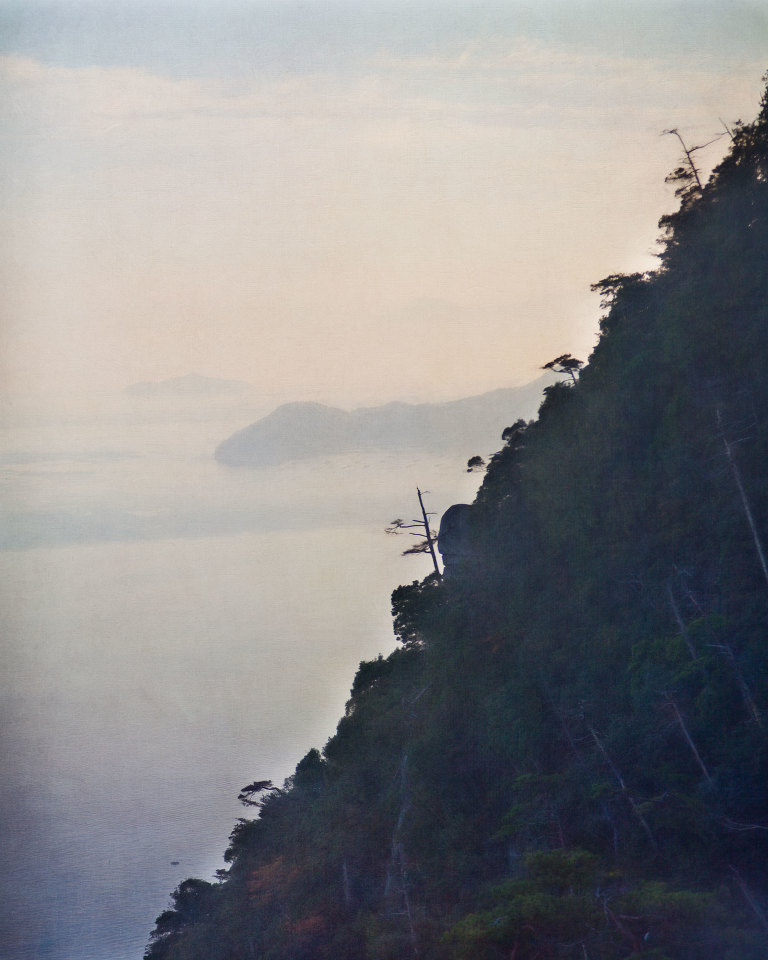 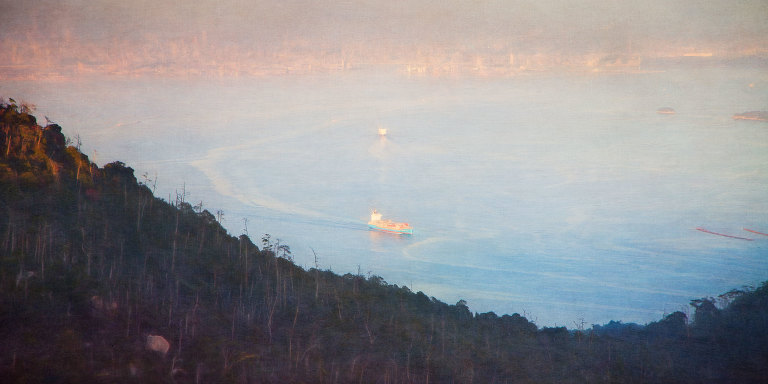 Ships in Hiroshima Bay (from the summit of Mount Misen) 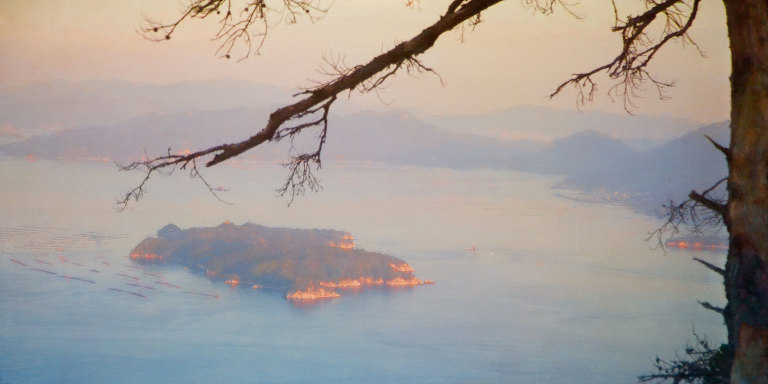 Dinner at the hotel was wonderful –  a traditional Kaiseki meal of multiple courses of small dishes made from seasonal local foods, prepared and presented exquisitely to enhance the combination of flavours. Each table was in a separate high-walled booth, so the dining experience felt private and luxurious. 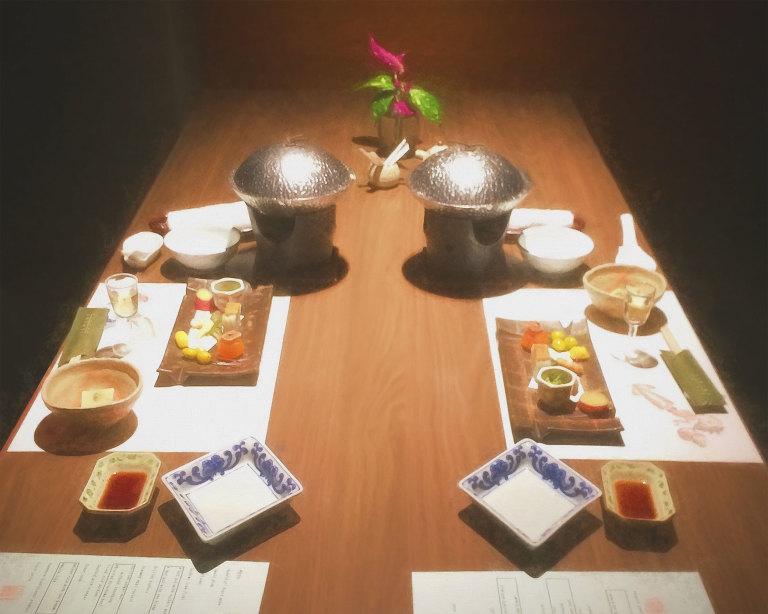 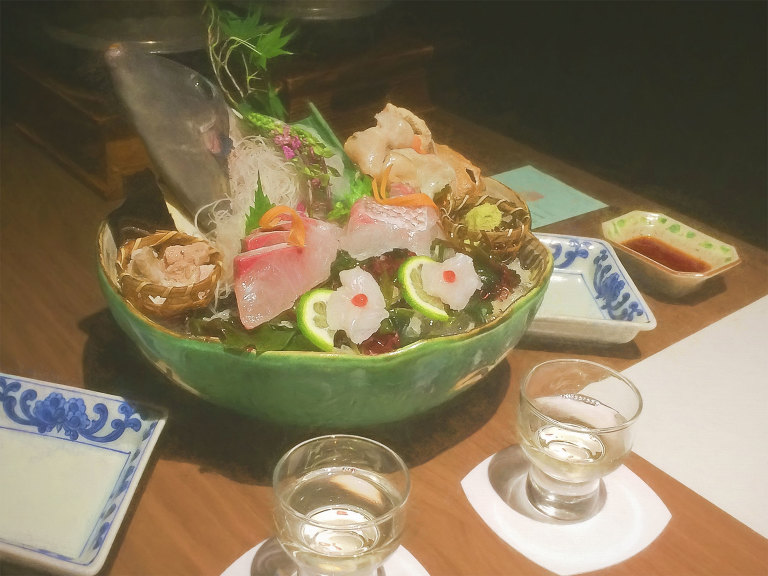 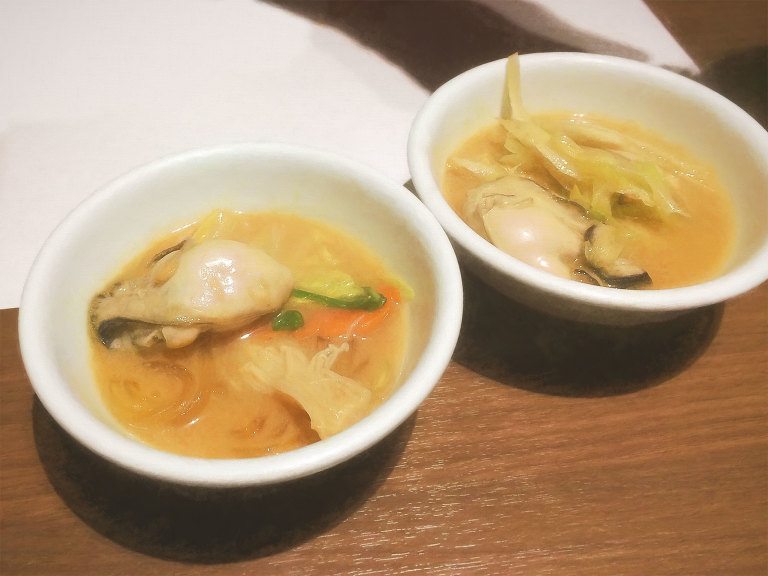 Hot pot with oysters and miso 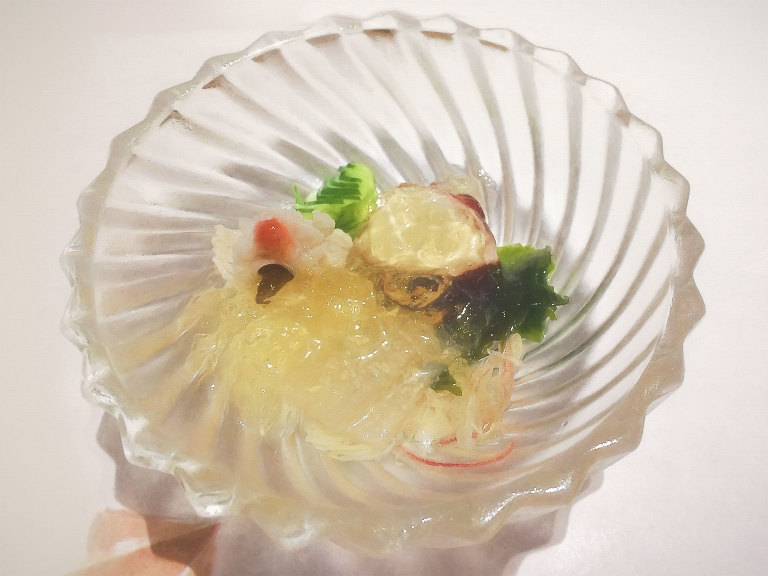 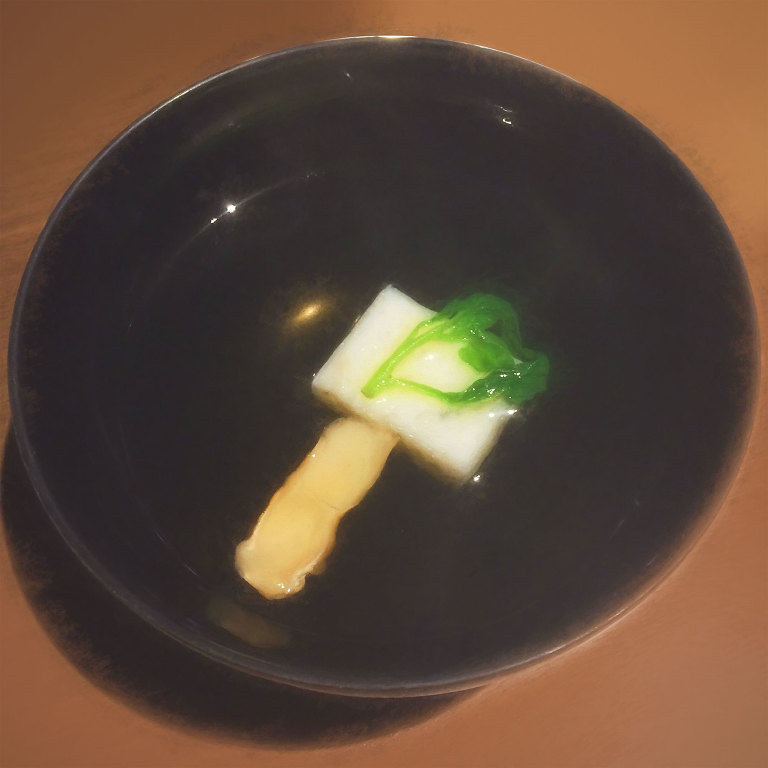 After dinner we walked down to the shore to view the illuminated O-torii gate and Itsukushima shrine. 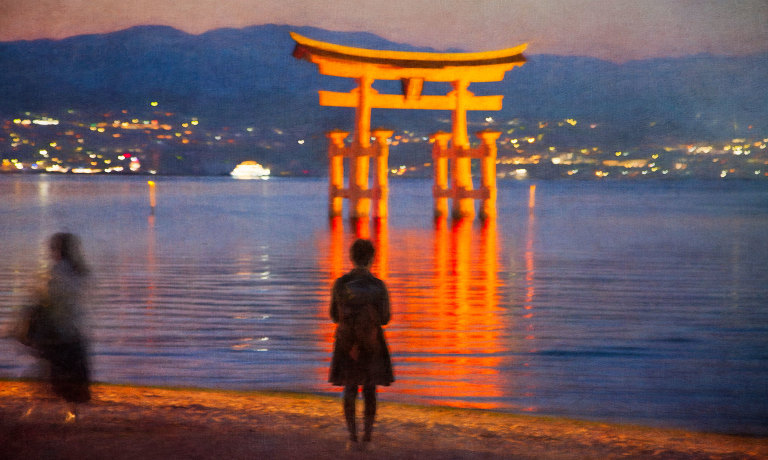 In the morning it was raining and the colours of nearby plants and buildings were rich and vibrant against a misty backdrop. 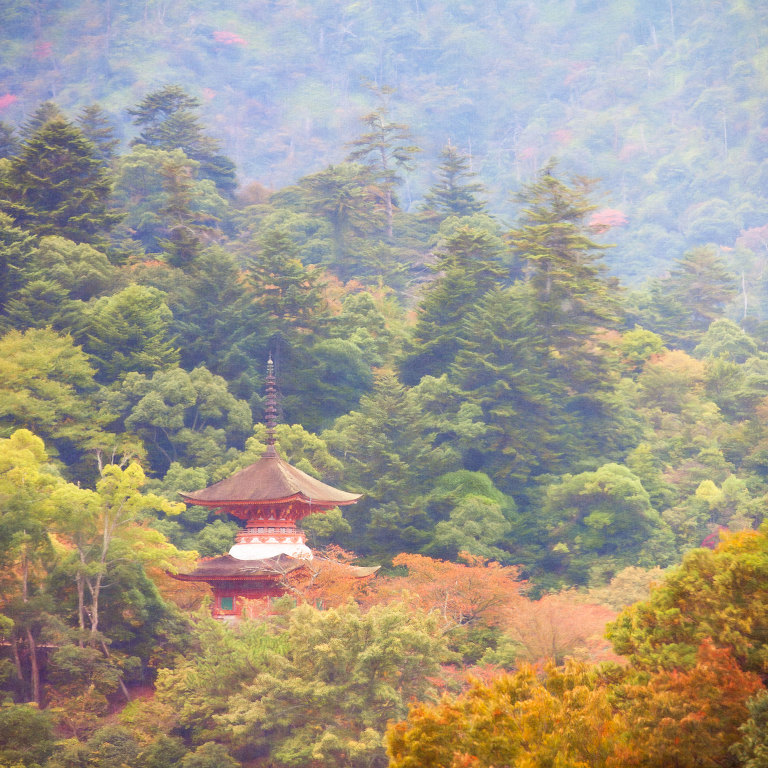 Breakfast (Japanese or Western) was served in a communal room overlooking a garden. 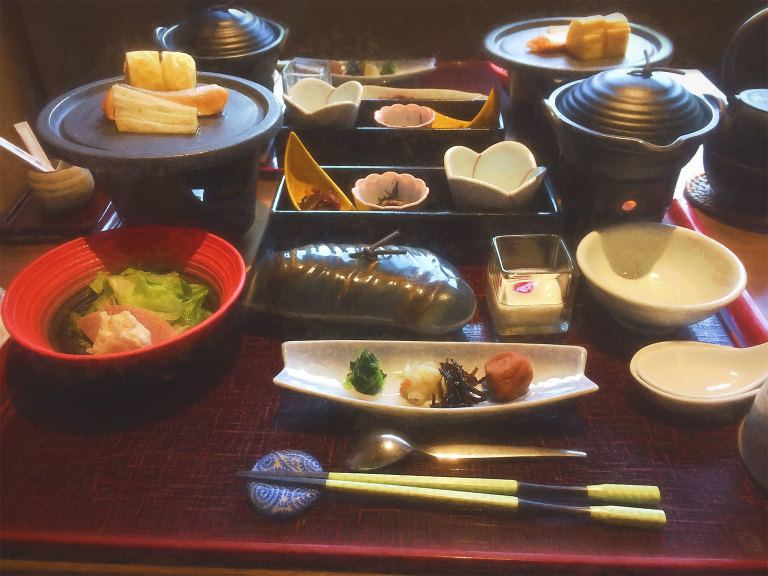 After breakfast, we packed and checked out of our room. We left our overnight case at the hotel, and walked to the shrine, and collected a shuin. 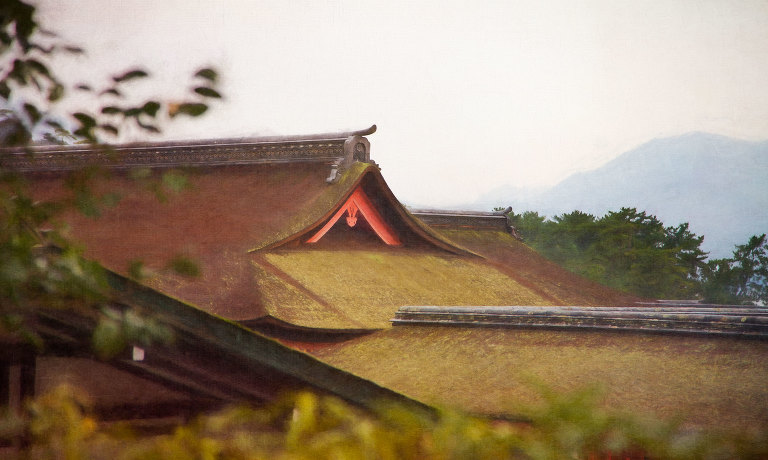 Shrine roof and mountains in the mist

On the way back to the hotel we watched a couple of the beautiful Sika deer that live on the island. They seem to go about their business without being too bothered by the crowds of humans around them. 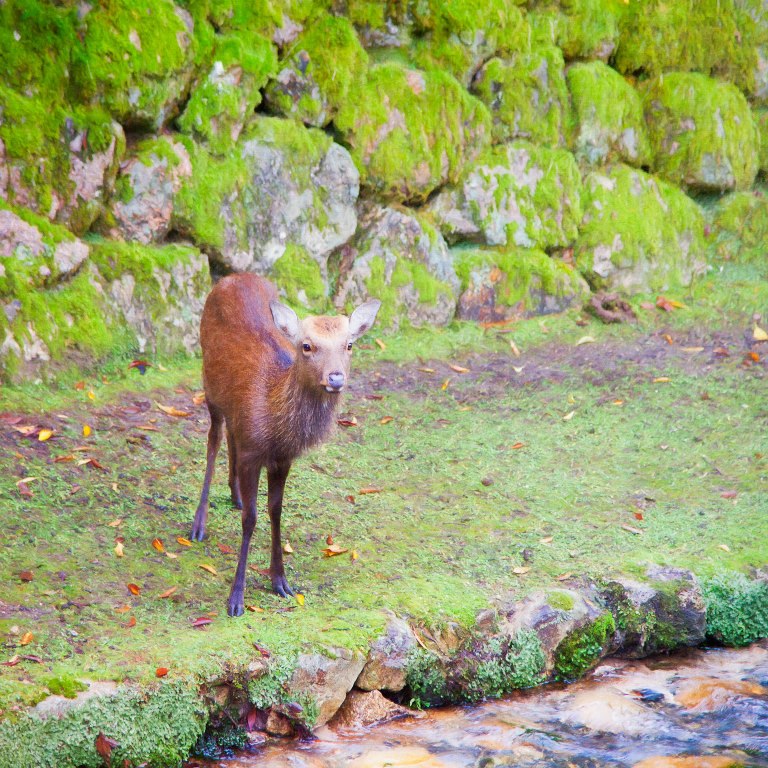 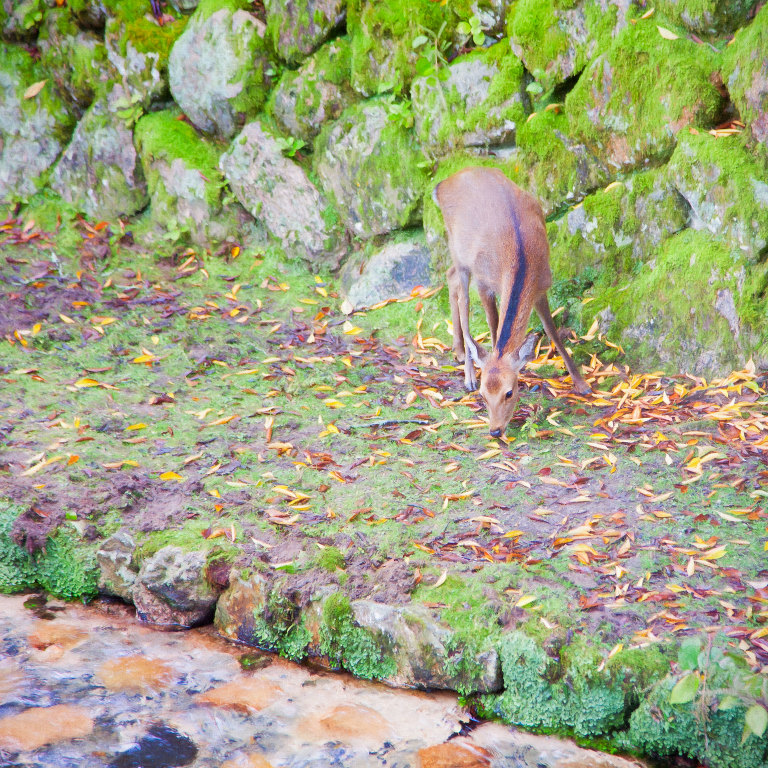 The shuttle bus took us to the ferry terminal and as it prepared to leave, the hotel staff lined up and bowed and waved. We caught the Shinkansen back to Kyoto – surrounded by young men who had colds and sniffed loudly to clear their noses.