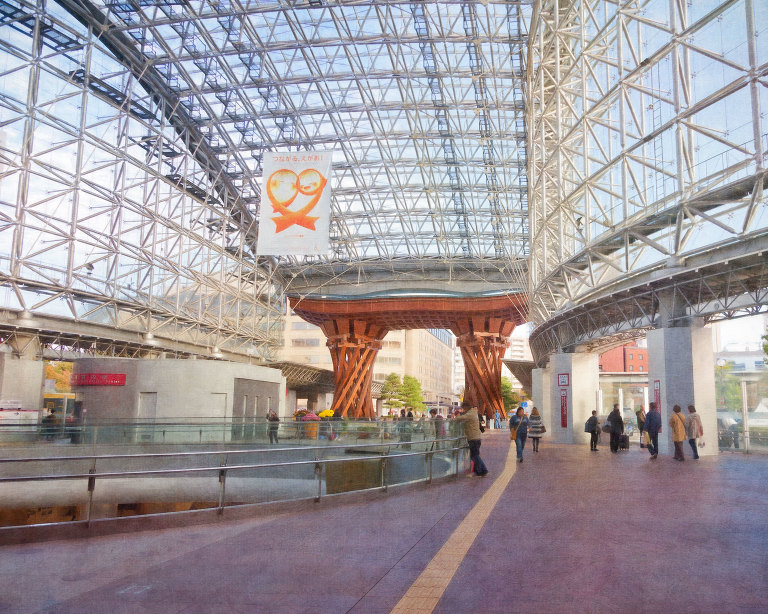 Kanazawa is smaller and more compact than Kyoto, but similar in its mix of traditional and modern areas. We arrived at Kanazawa Station, which is a large modern complex, with a wooden Tzuzumi-mon (drum gate) at the Eastern entrance, in the massive glass and aluminium Motenashi (welcome) dome. Kanazawa Station is a convenient transport hub with local and tourist buses, as well as trains. The station website provides helpful information about its amenities. The station complex includes shops, a hotel, and a tourist information centre with different counters for people who speak different languages. The station ajoins the Forus multi-storey department store, which houses a range of restaurants on the 6th floor.

As we left the Western entrance of Kanazawa Station, a friendly station attendant greeted us and pointed us in the direction of our hotel. It was an easy walk from the station to the Manten Hotel. Once checked in, we looked out from our hotel room on the 11th floor and noted the moon and dramatic contrail in the evening sky. We then returned to Kanazawa Station to visit the tourist information centre, to collect local maps and information about the places we wanted to visit. We surveyed the list of restaurants in the Forus department store, and chose to dine at Morimorizushi, which has two outlets in Forus: one sushi train restaurant, which had a really long queue, and one restaurant where you are served what the chef selects and prepares, which had no queue. We chose the restaurant with no queue and were the only non-Japanese customers. The sashimi and sushi and local sake were delicious. 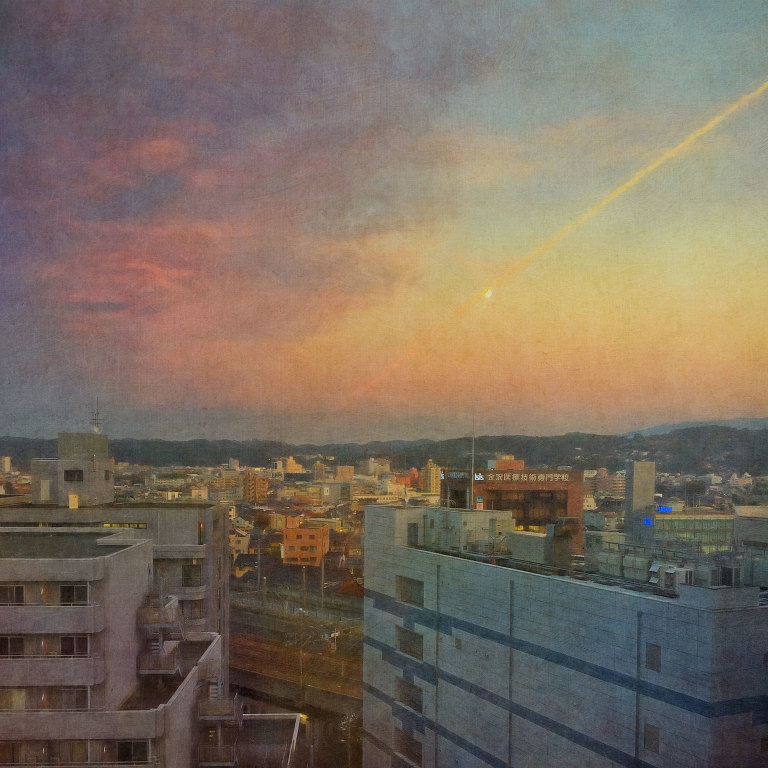 Moon with contrail, viewed from bedroom window in the Manten Hotel

Our hotel bedroom was the smallest room we stayed in during our 3-week trip. There was heating but no cooling air-conditioning, so the room felt too warm and close. The window opened, which was a relief, but we couldn’t leave it open through the night because the sounds from the nearby railway line intruded (thankfully not as much as in Ohiridai). I didn’t sleep well, partly because I was developing a bad cold. But the shower (ensuite) in the morning was great, and the breakfast was delicious and beautiful (both mornings, the breakfast was the same with minor variations), clockwise from left: bowl of steamed rice (with optional umiboshi plum); sashimi (squid) with seaweed and wasabi; grilled salmon; miso soup; omelette and matsumaezuke; squid ink; selection of vegetables including mushroom, and beans; pickled daikon and cucumber. 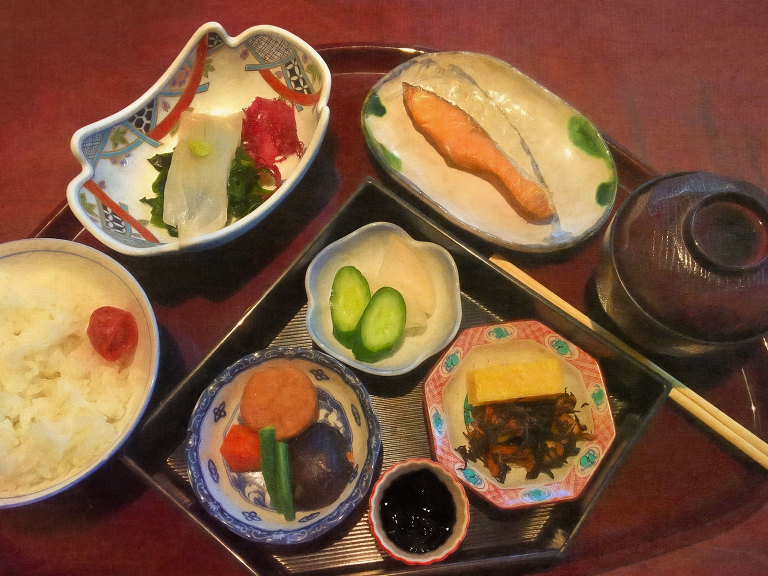 From Kanazawa Station we caught a bus toward Kanazawa Castle and Castle Park, and Kenrokuen Garden, which is considered to be one of the three most beautiful gardens in Japan along with Kairakuen in Mito, and Korakuen in Okayama. It’s a strolling-style garden founded during the Edo period (1603-1868). The name means Garden of the Six Sublimities (the six essential attributes that make up a perfect garden according to Chinese landscape theory): spaciousness and seclusion, artifice and antiquity, water-courses and panoramas.

As we alighted we saw a man crouching beside a pond and noticed koi fish swimming up to him, feeding from his hand, and allowing him to pet them. As we approached, the man offered us some of his food to feed the fish. I gestured no thanks, and smiled. He went back to feeding the fish. After watching for a while, I asked – in my very bad Japanese – ‘Excuse me, may I take a photo?’ He frowned slightly, and then stood up and moved away. I was confused … and didn’t take any photos. After some time, he returned to the fish, and I realised that he thought I wanted him to get out of the way so I could photograph the fish. I took this photo and showed it to him, and he laughed. We saw him again later in the morning, and exchanged nods and smiles. 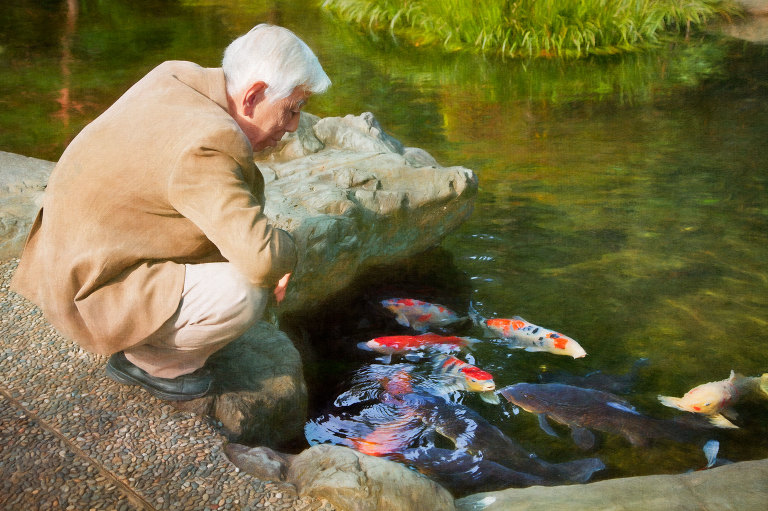 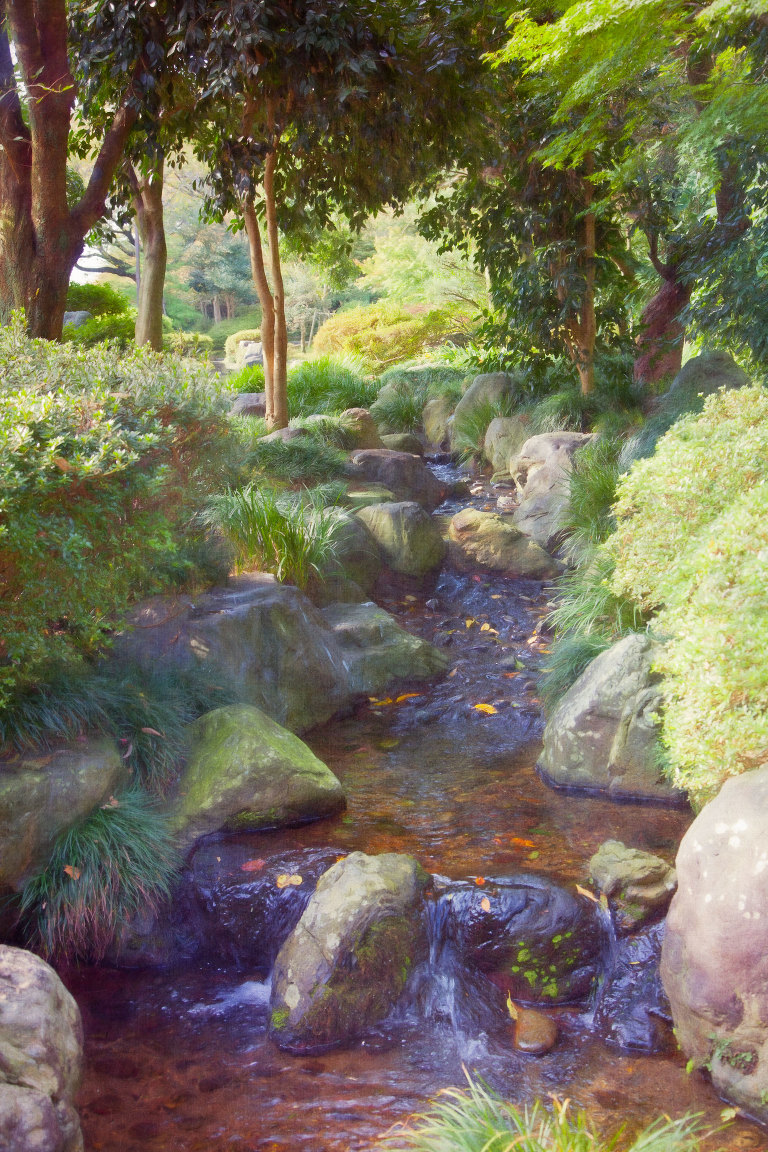 In the Kanazawa Castle grounds there were statues beside paths shaded by beautiful trees. It looked serene but the ground staff were using loud leaf blowers, so we cut our visit short and headed for Kenrokuen. Just inside the Katsurazaka Entrance to Kenrokuen, there was a huge tree with moss-covered roots. 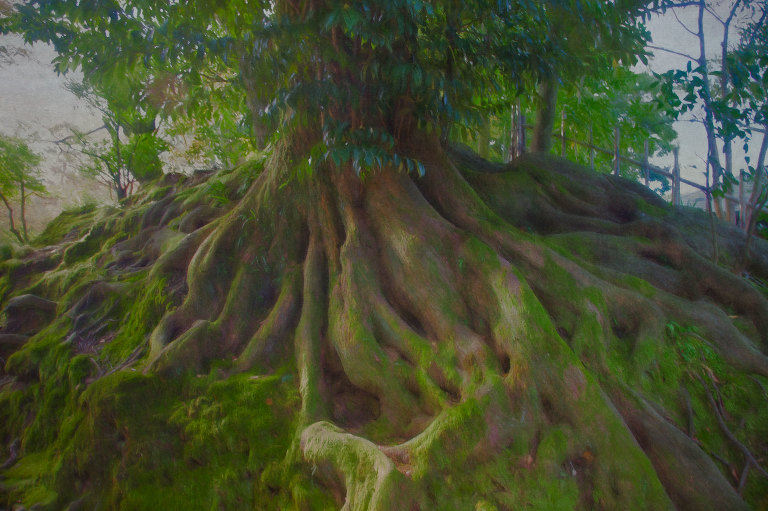 Moss on tree roots near the Katsurazaka Entrance to Kenrokuen

A little further into the garden, beside the bridge to the Ishikawamon Gate of the Kanazawa Castle, cherry trees displayed their autumn foliage. 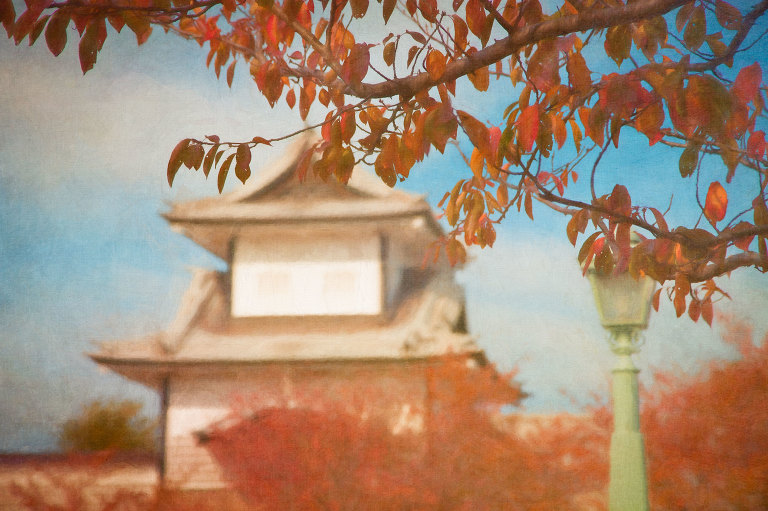 We were so fortunate that our visit coincided with the construction of yukitsuri (snow suspenders) that support the trees to bear the weight of snow. Construction beings on November 1, and it was reported on the news, and was obviously a really popular thing to watch – there were crowds standing around watching the team throwing and tying ropes. 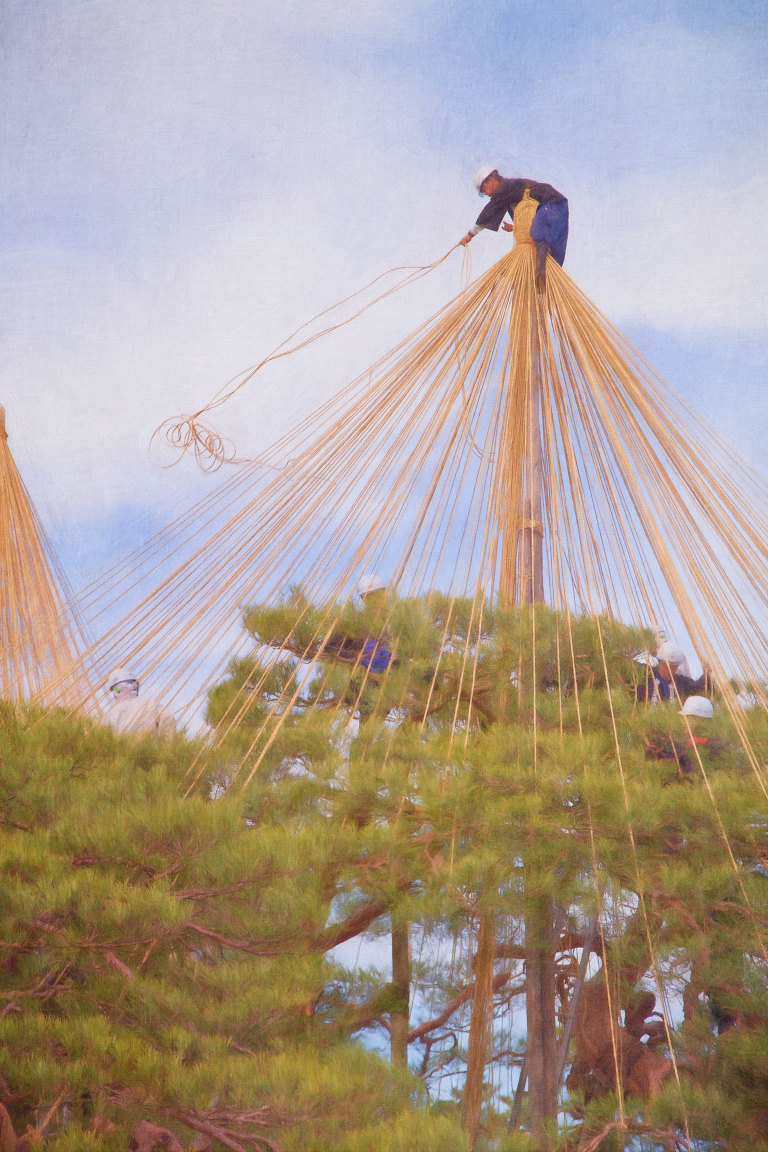 The Karasakinomatsu Pine was grown from seed – it is vast and spreads over the Kasumigaike Pond, where its extended branches are supported by wooden crutches. 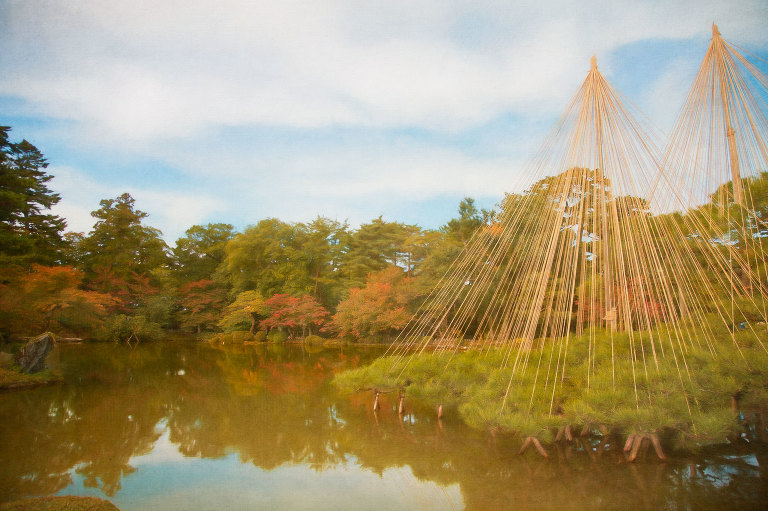 The famous Neagarinomatsu (raised root) Pine is supported by a ring of crutches. 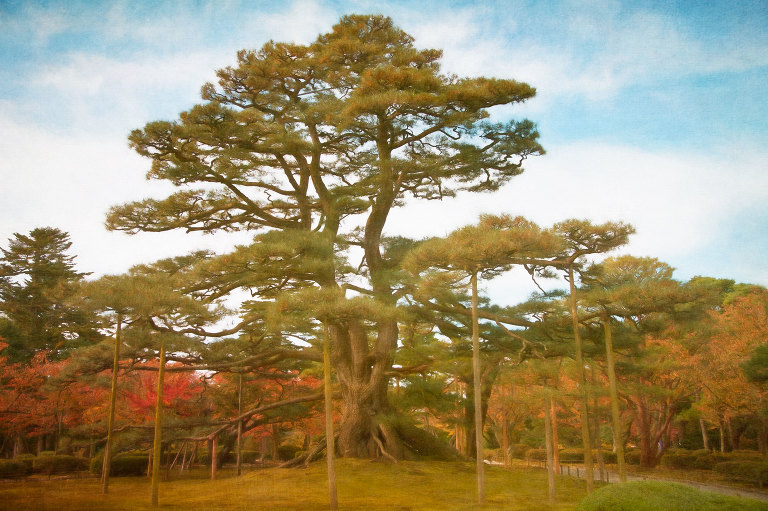 The water in Kenrokuen is from a system devised to extinguish fires, developed after a fire in 1631 consumed most of the city, including the castle. Cherry trees line the winding streams – they would be so pretty in blossom. 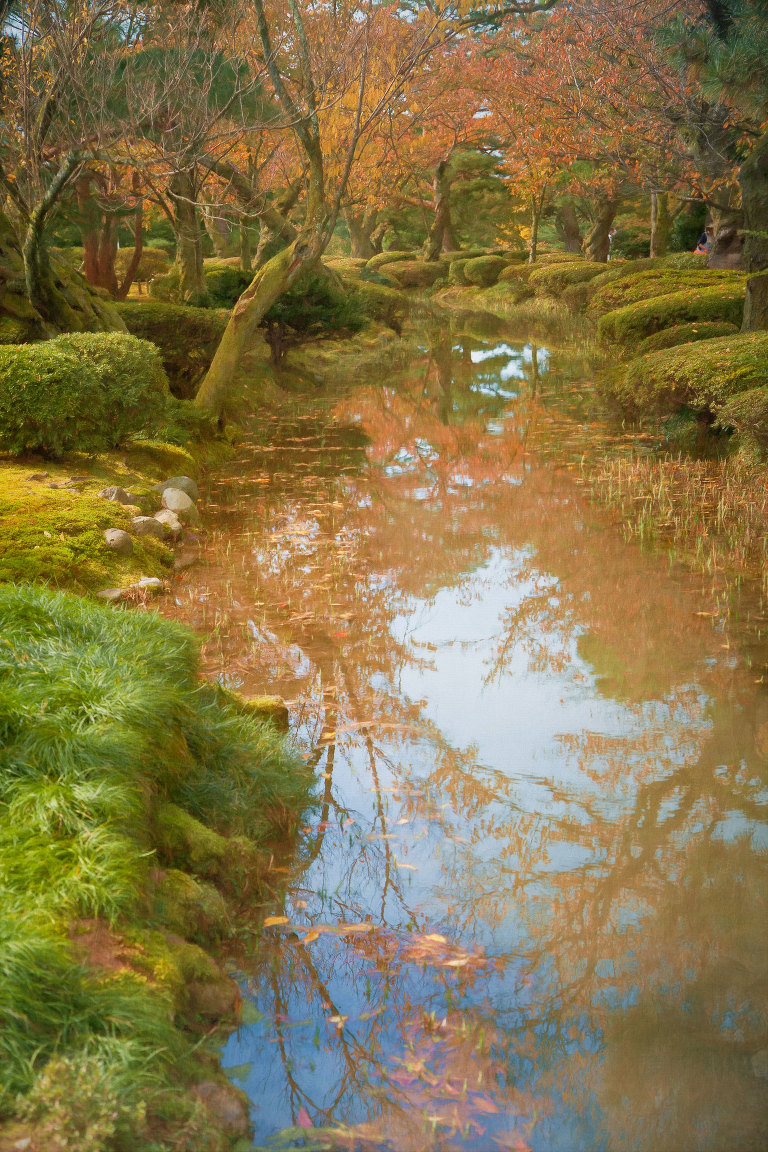 The Seisonkaku samurai villa is beside the Kenrokuen gardens, and is reached through this gate. 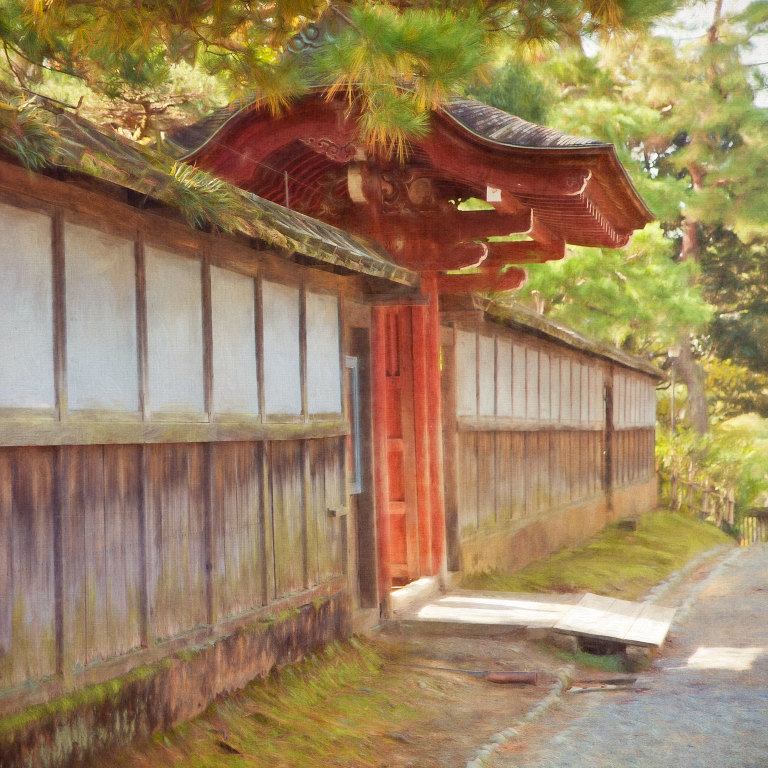 We left Kenrokuen, and crossed the road to the grounds of Ishiura Shrine, which didn’t appear to be open and looked a bit like a closed carnival ground, with its hooded stalls. While waiting for the traffic lights to change, we watched a large bird of prey circle above, and then land on top of a building overlooking the intersection. As we crossed the road, there was a car, like no car I had seen before, stopped at the red lights. It was a 1970s-style black station wagon, and behind the driver’s cabin was an ornate wooden structure, like a temple, with a pitched roof of green and gold ceramic tiles. I guessed, “that’s a hearse” and Google confirmed that we had seen a Japanese hearse and they are amazing! 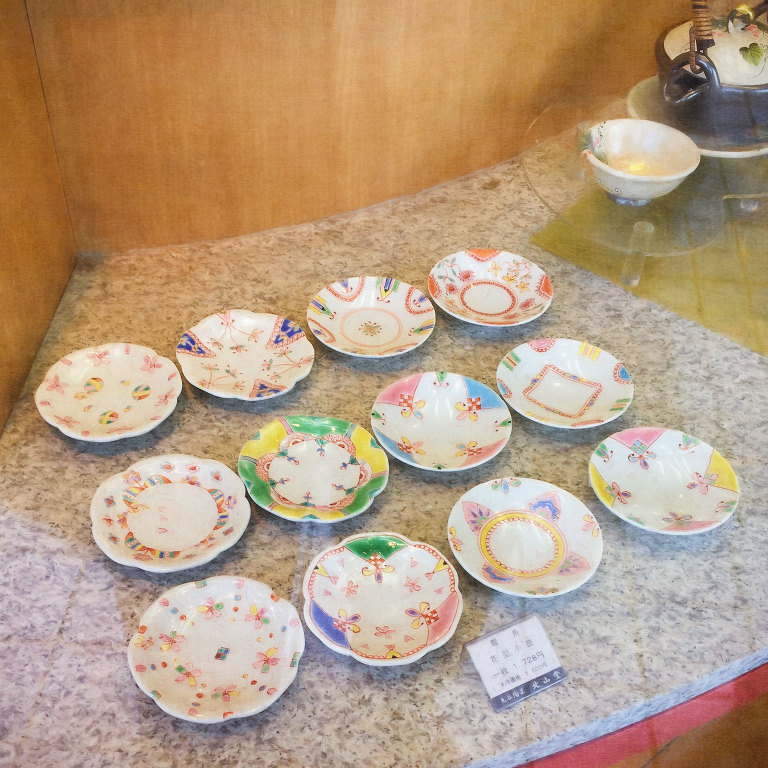 We caught a bus from Hirosaka Street to “Kanazawa’s Kitchen” Omicho – a bustling market with a network of covered streets lined with stalls. It sells a large variety of fresh seafood, fruits, and vegetables, dried goods such as seaweeds and teas, prepared and cooked foods such as grilled crumbed skewers or oden, and traditional confectionary for the tea ceremony (Kanazawa is reputed to be one of the best places for confectionery making, along with Kyoto and Matsue) – delicious and fascinating.

From Omicho, we caught the bus to Kazuemachi, the smallest of three traditional tea house districts in Kanazawa. We explored the area which is located west of the Asanogawa River between Asanogawa Shashi Bridge and Nakano Hashi Bridge. 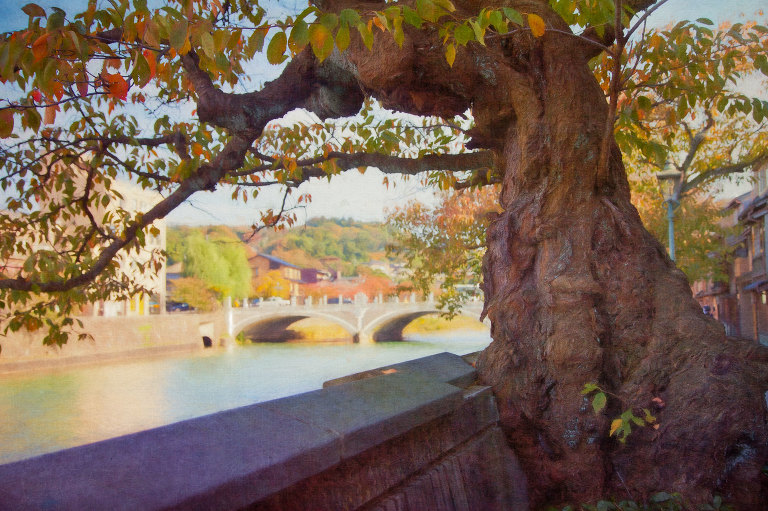 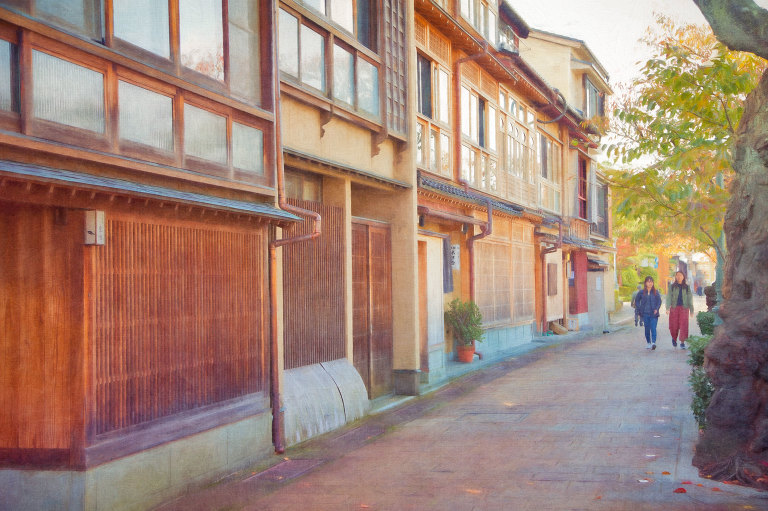 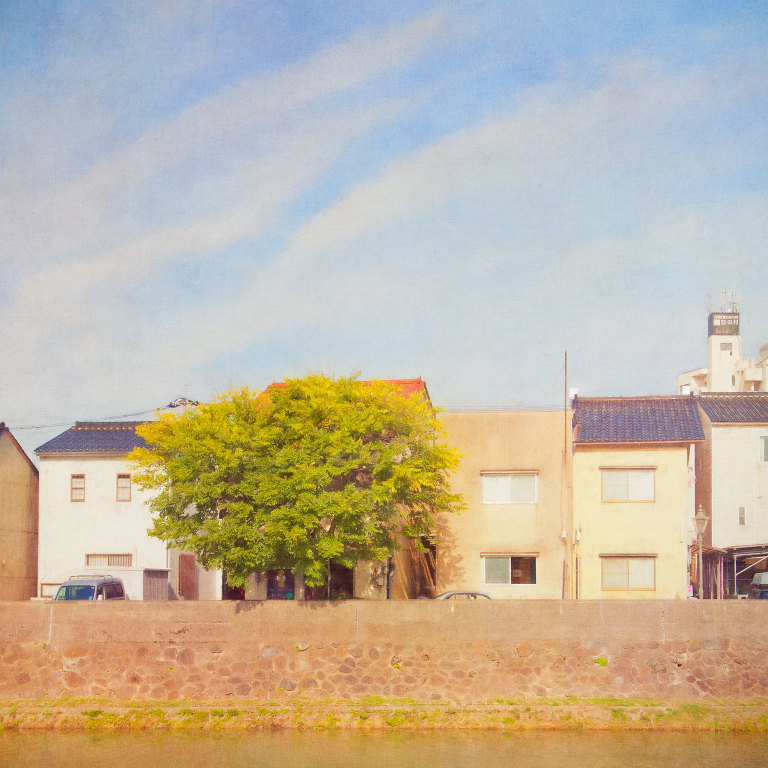 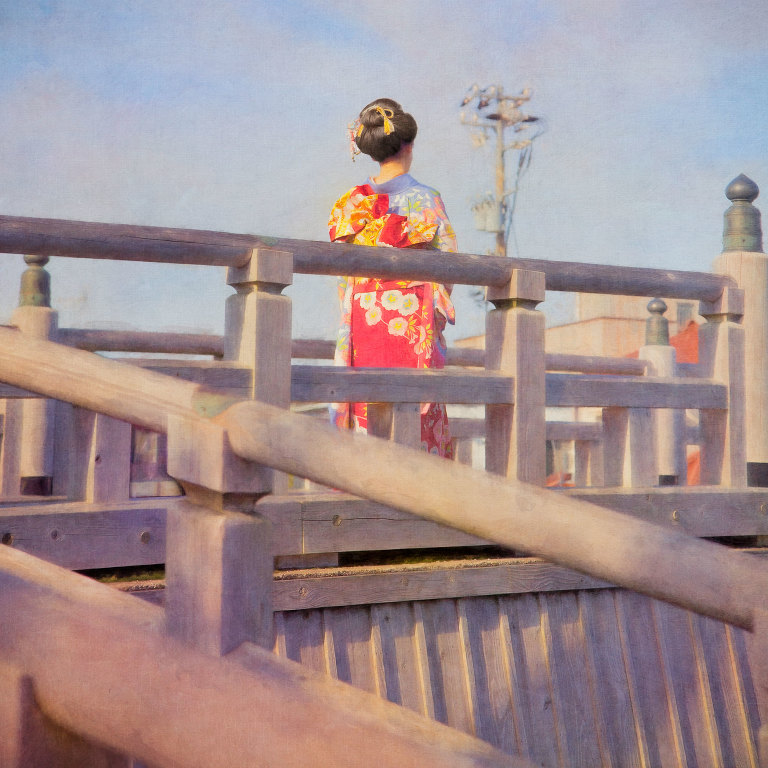 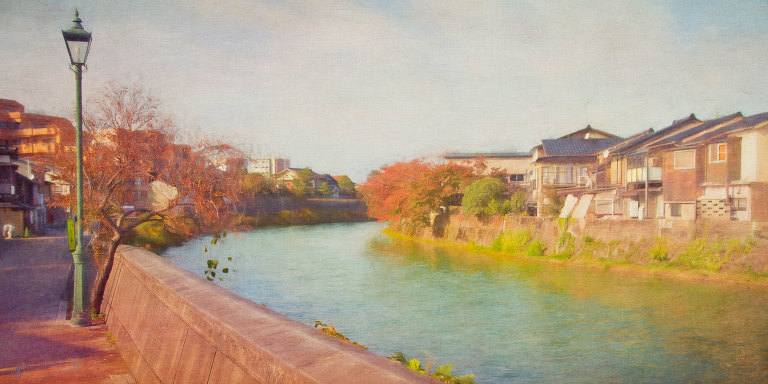 View along Asanogawa River, beyond the Kazue Machi Chaya District

We crossed the Naka-no Hash Bridge and walked to Higashi Chaya, the traditional tea house district on the eastern side of Asanogawa River. The area contains three tea houses that are open to the public, and is much more popular with tourists than Kazue Machi. It’s a good place to sit and watch people pass by – there were quite a lot of young tourists wearing hired traditional clothing, which seemed a bit strange to me: culture as fancy dress?

We ate dinner in the hotel – one dish stood out as beautiful and tasty: pickled eggplants which were small and thin, with beautiful indigo blue skin, sliced into rounds with a star of white flesh at the core.

In the morning, we caught the Shinkansen to Tokyo. There were no unreserved cars on the Shinkansen, so we had to book seats. During the journey, we shared the confectionary we bought from Omicho market with the woman sitting next to me. We tried to have a conversation without much success but with lots of nodding and smiling.