Red Hook is historic manufacturing and docklands area in north west Brooklyn. where the locals have worked together to rebuild their homes, businesses, and community after severe flood damage from Hurricane Sandy. Red Hook has Belgian block streets, huge civil war era warehouses, a collection of derelict trolley cars, lots of two-story weatherboard (clap board) houses, community gardens, artist studios, and the Louis Valentino Park and Pier (named in honour of the local decorated firefighter who died in 1996 while searching for wounded firefighters) with a view to the Statue of Liberty. A year after Hurricane Sandy, many Red Hook restaurants, cafes, and distilleries were open for business, serving gourmet delicacies – I wanted to check it out. We started at the top of Van Brunt Street, and walked south, past the Red Hook Works mural by Terica Watson, on the corner of Van Brunt and Commerce streets. 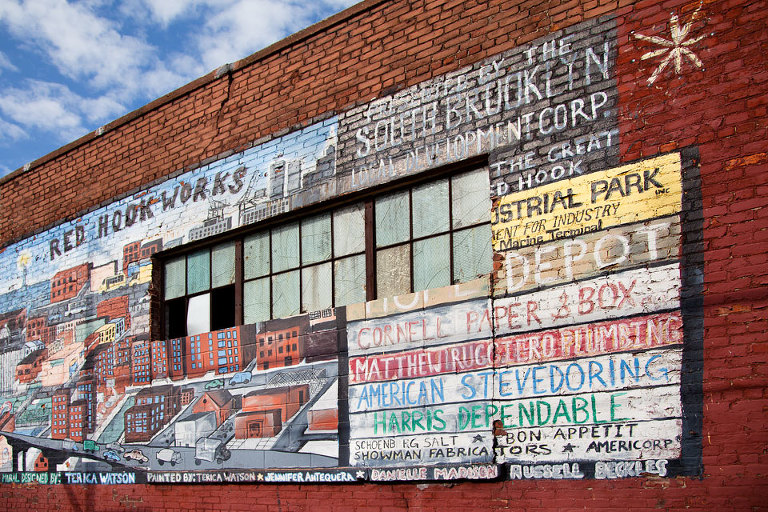 Red Hook Works mural by Terica Watson, on the corner of Van Brunt and Commerce Streets.

Our first port of call was was the Red Hook Lobster Pound, where we shared a Maine Style (tossed with mayonnaise) and Connecticut Style (with butter and lemon) Lobster Rolls topped with scallions and paprika – delicious!

Just a little further down Van Brunt Street there were a couple of interesting looking places. 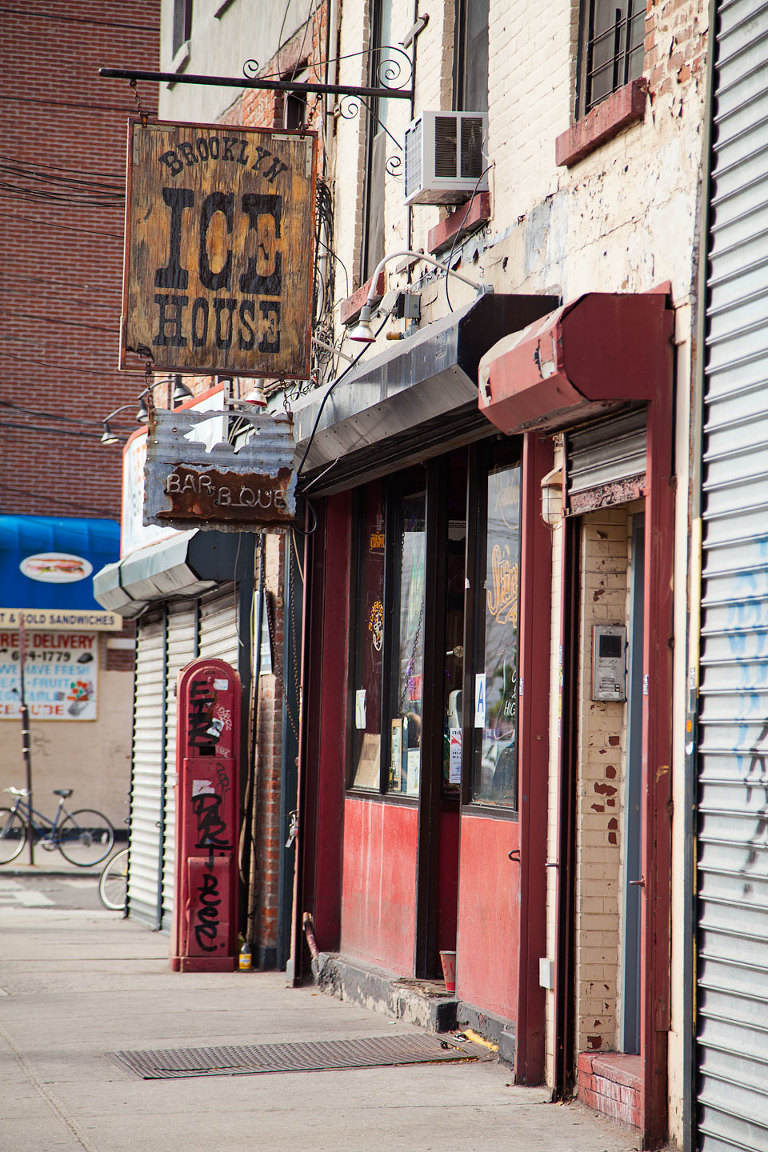 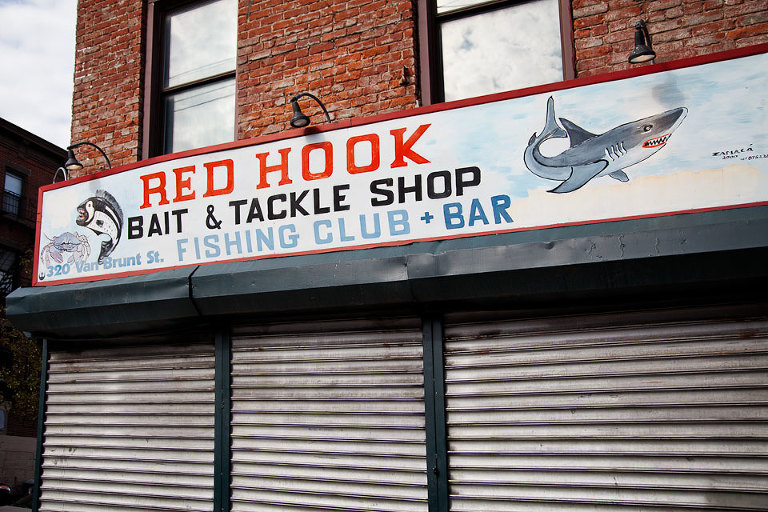 We’d heard there was a Banksy artwork on the corner of Van Brunt and King Streets, but by the time we visited, it had been vandalised and covered with a steel plate to protect the remains. 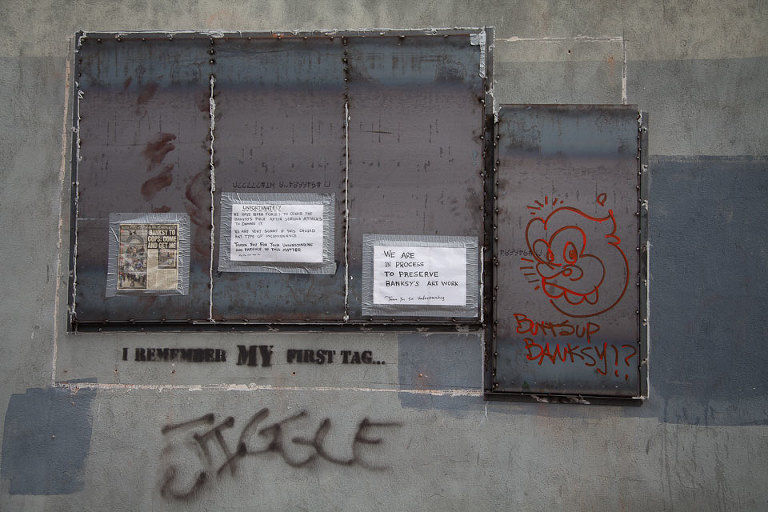 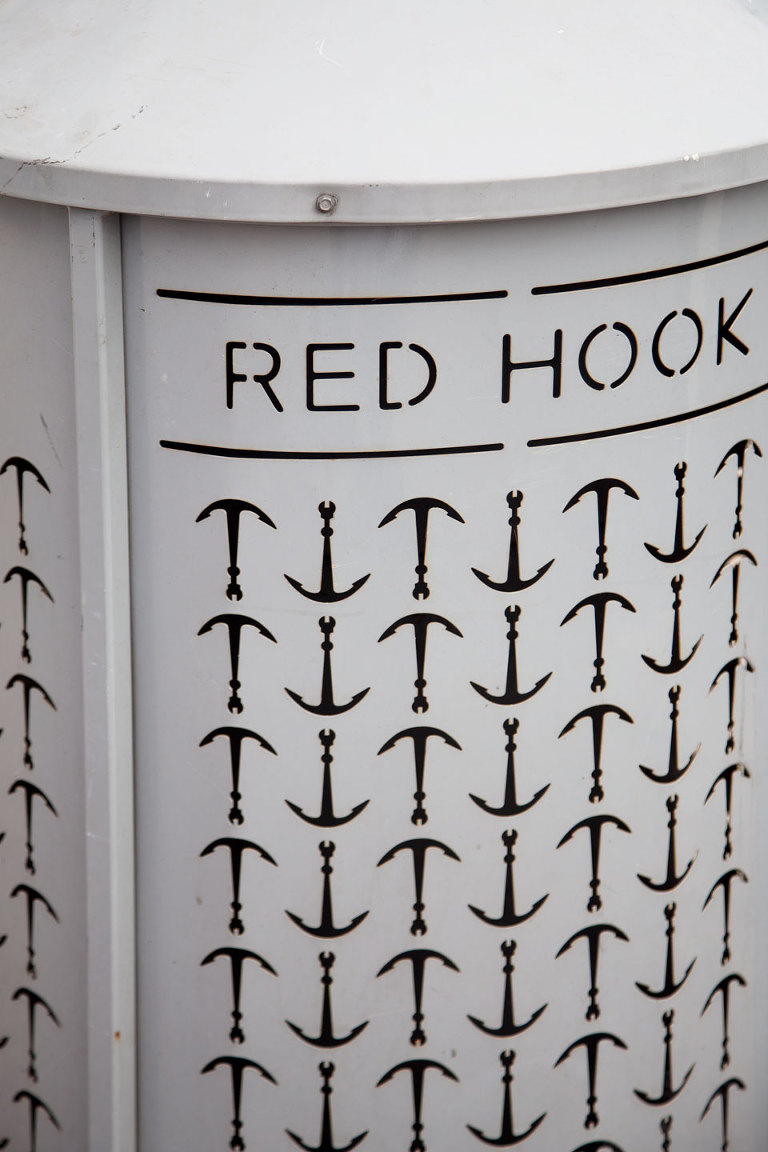 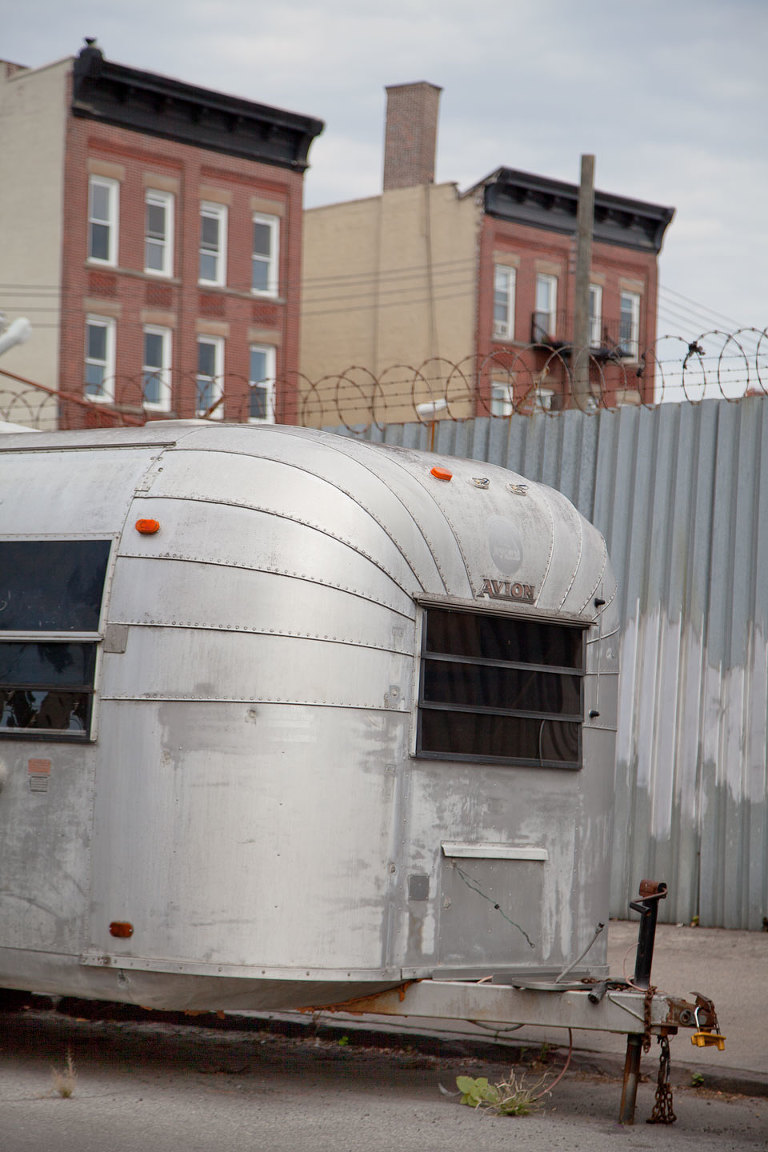 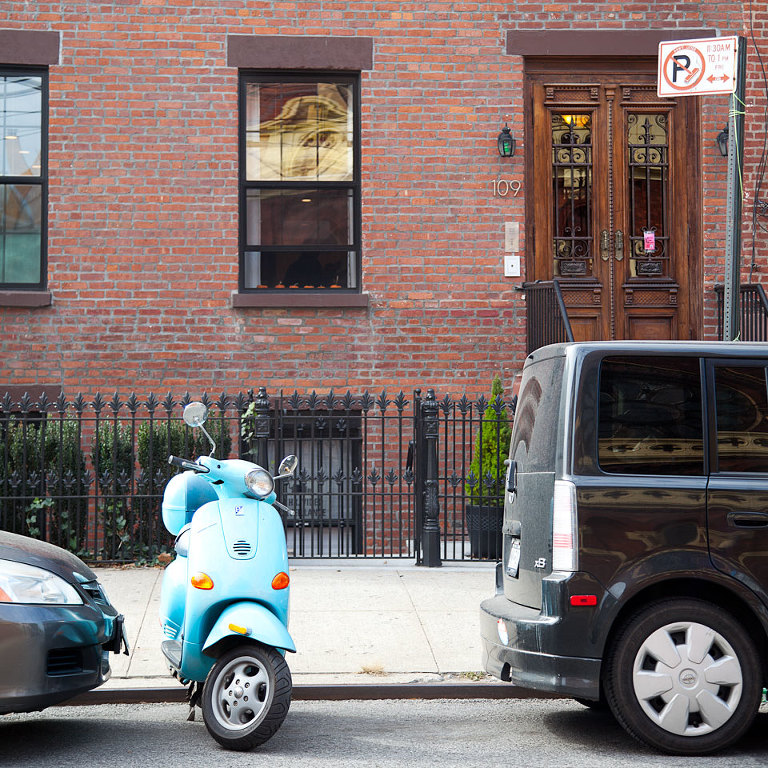 Street with beautiful fence and doorway 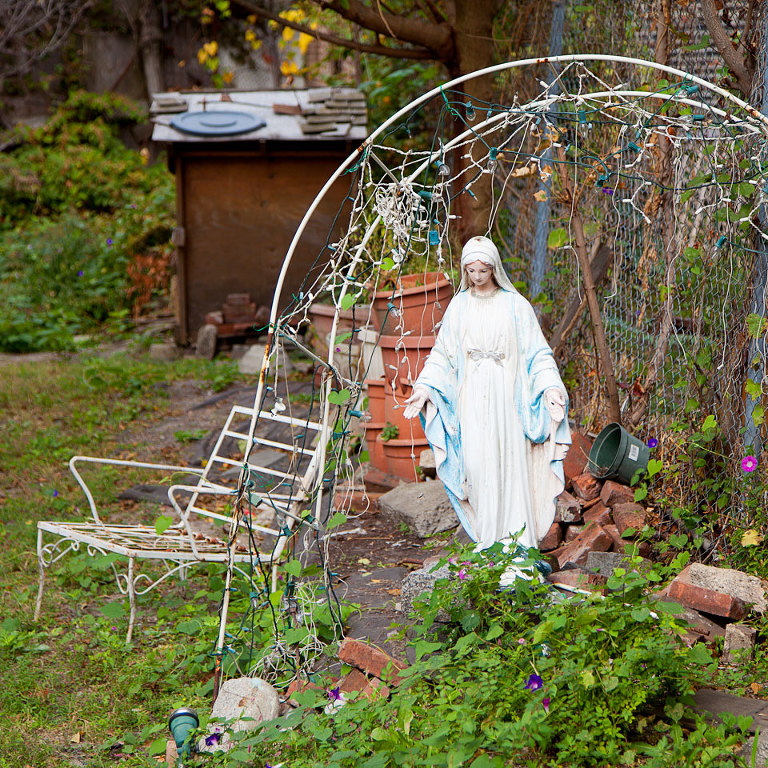 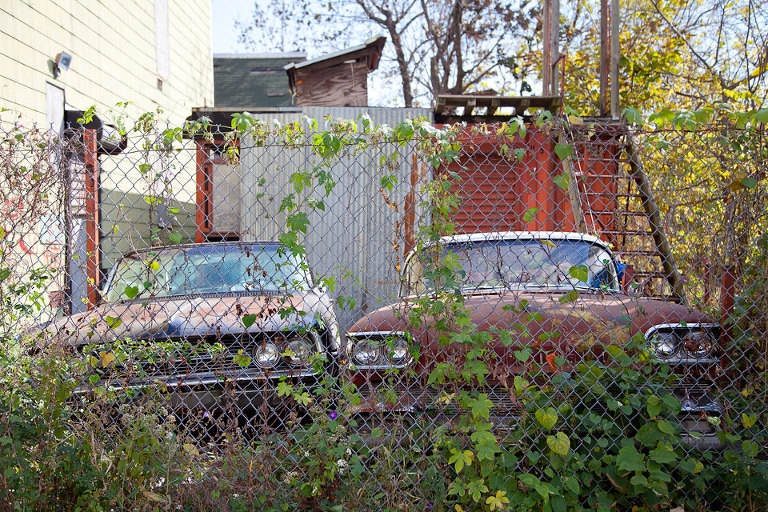 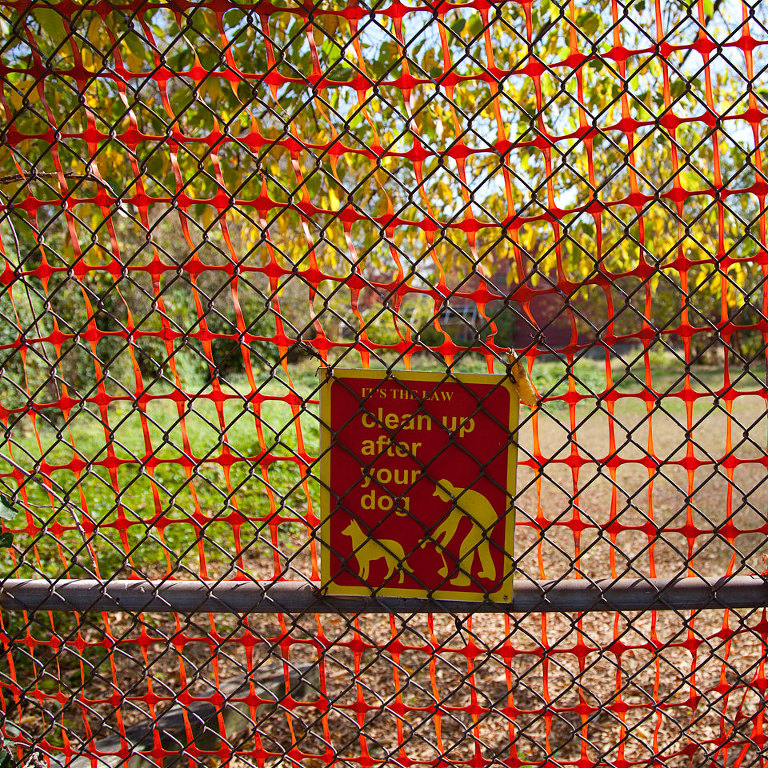 Clean Up After Your Dog

Unfortunately, Home Made, which I’d read great things about, was closed. But maybe that was a good thing, because even though we walked around exploring the area, we weren’t hungry enough to try out any of the great eateries we’d heard about, like The Good Fork. But we stopped at Baked for coffee, and bought a bag of cinnamon marshmallows to take away (they were amazing!). Dry Dock, corner of Van Brunt and Conover Streets – the name made me laugh. 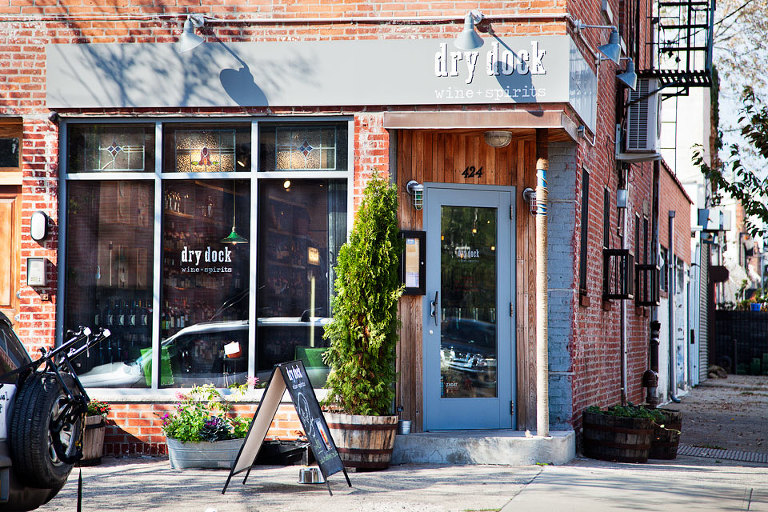 Dry Dock – clever name for an alcohol store in this area 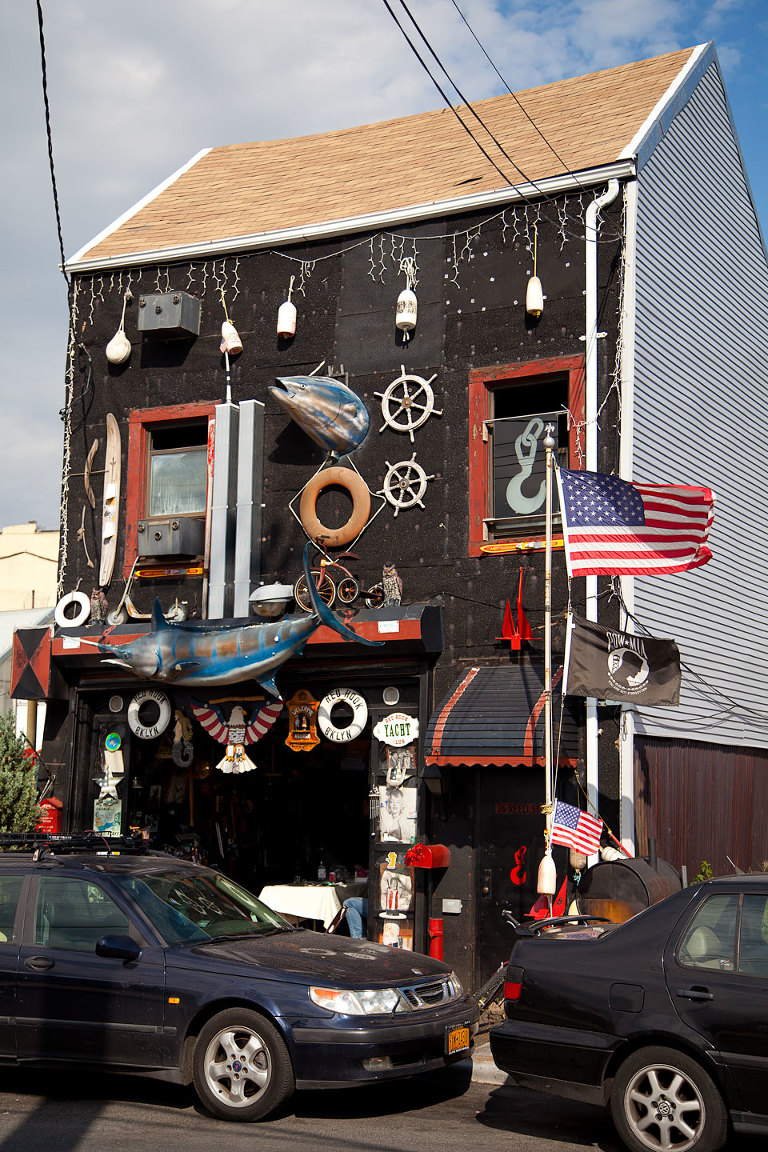 The 19 century warehouses on the waterfront are so beautiful; we wandered all around them. 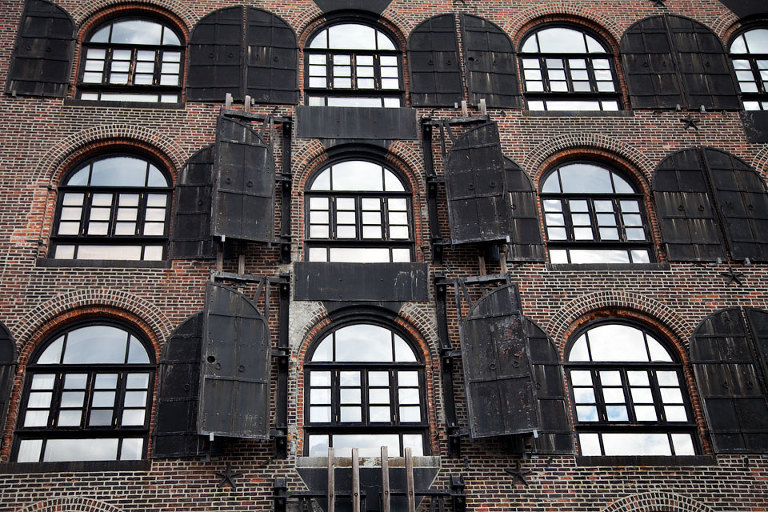 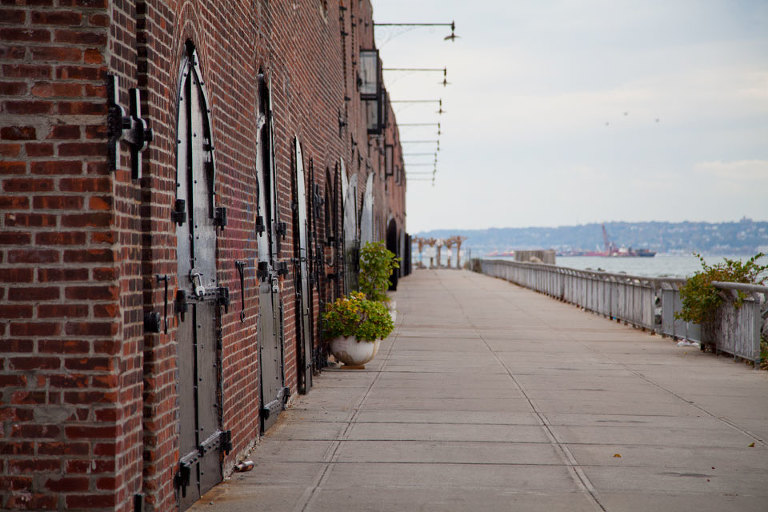 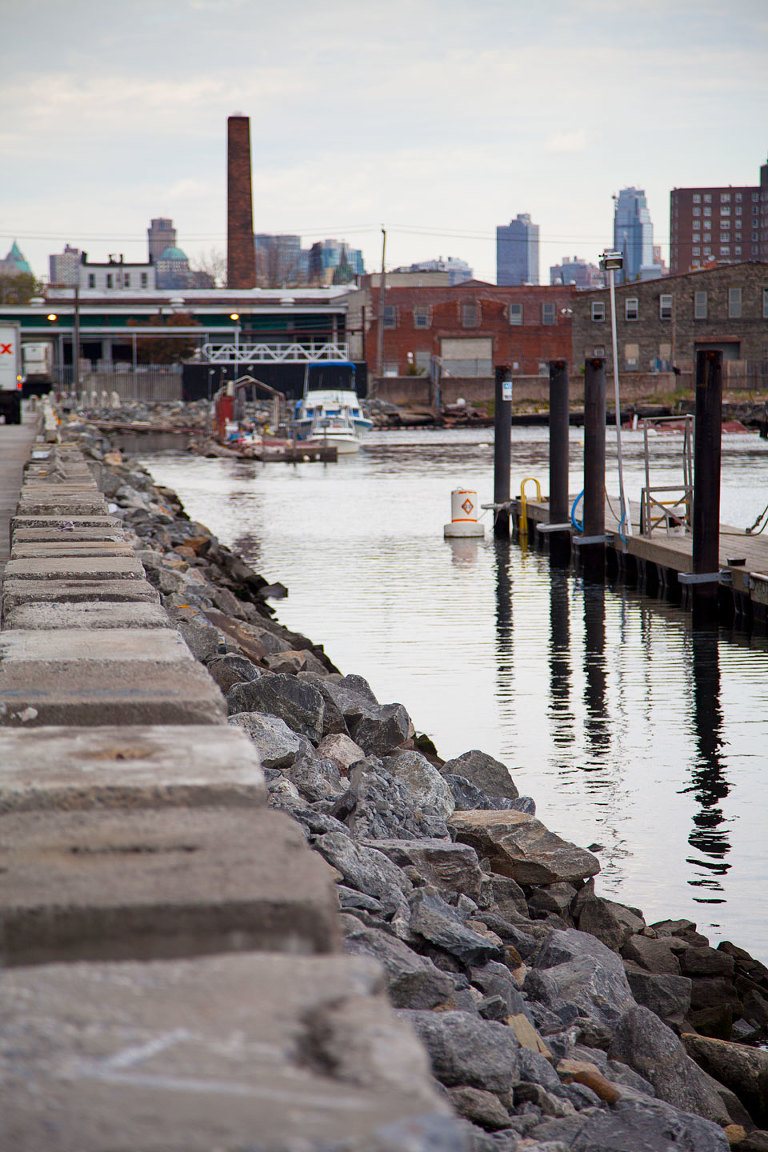 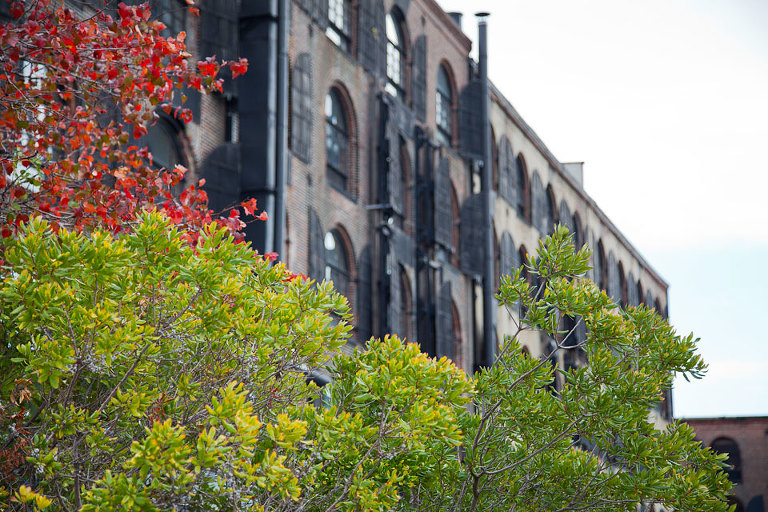 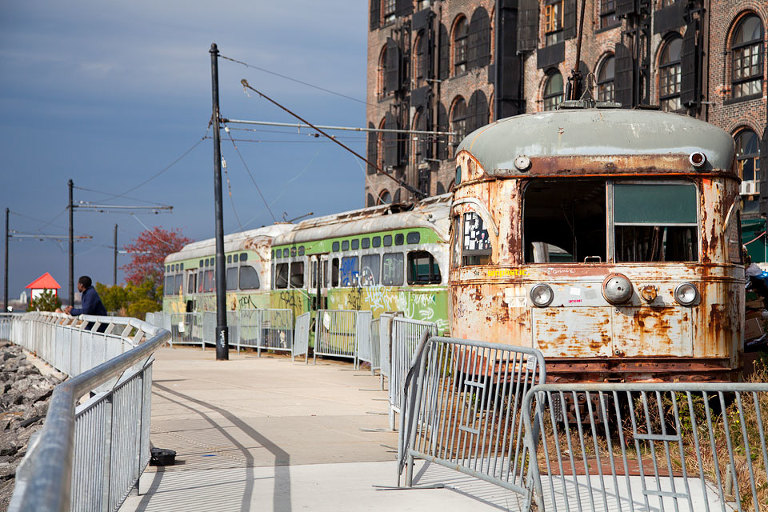 Trolley cars collected by Bob Diamond who had a vision of reviving this mode of transport to connect Red Hook with downtown Brooklyn. 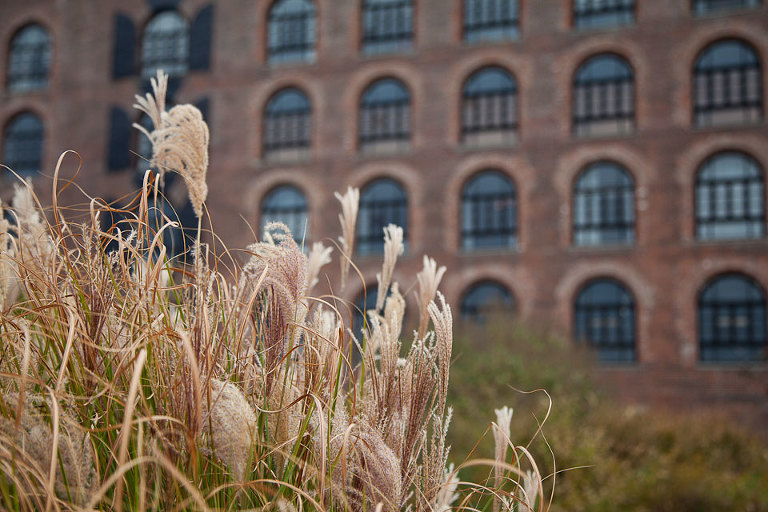 Grasses and warehouse windows – from the Louis Valentino Park 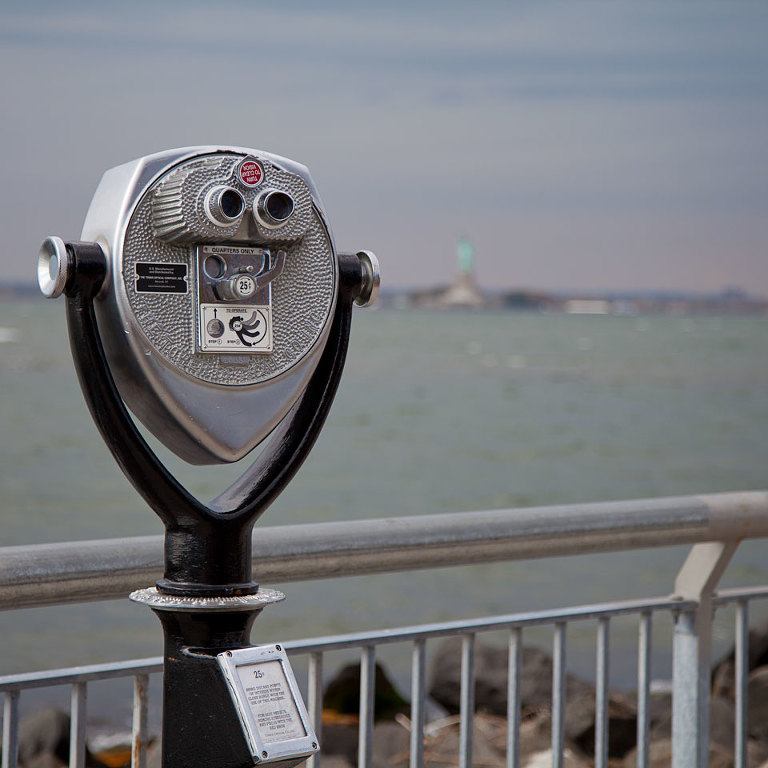 Quarters Only – view to the Statue of Liberty 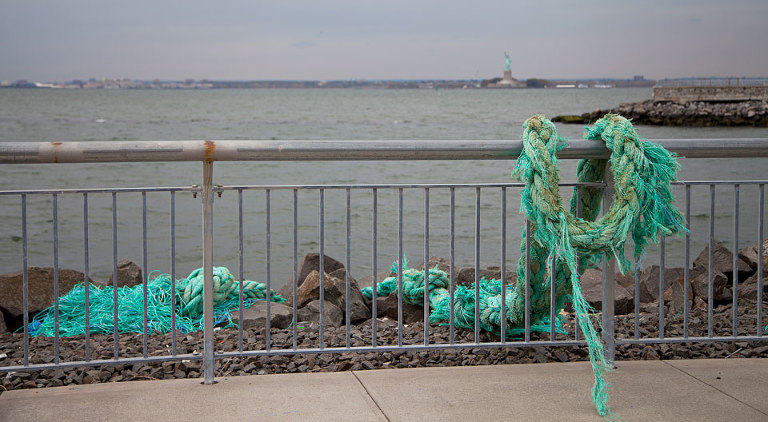 After admiring the Louis Valentino Park and the view of the Statue of Liberty, we headed up Conover Street. 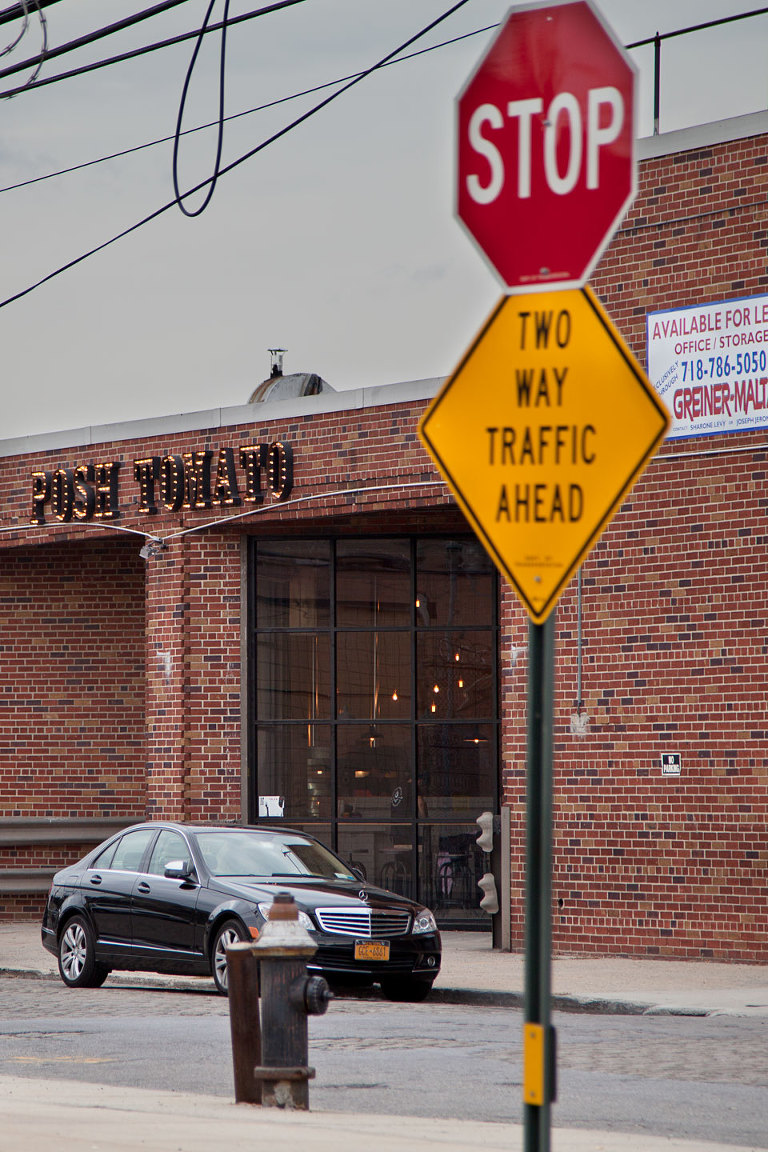 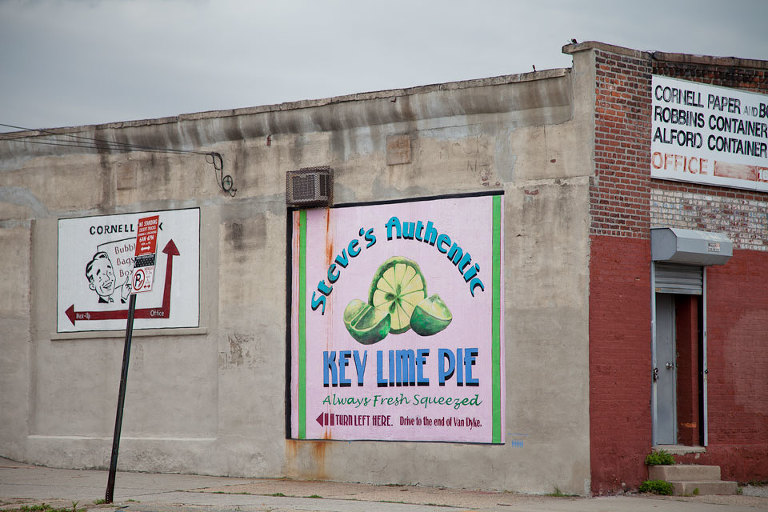 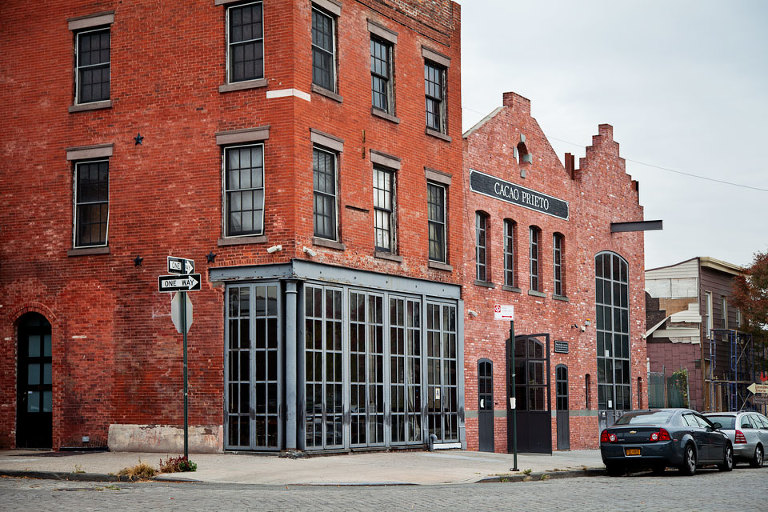 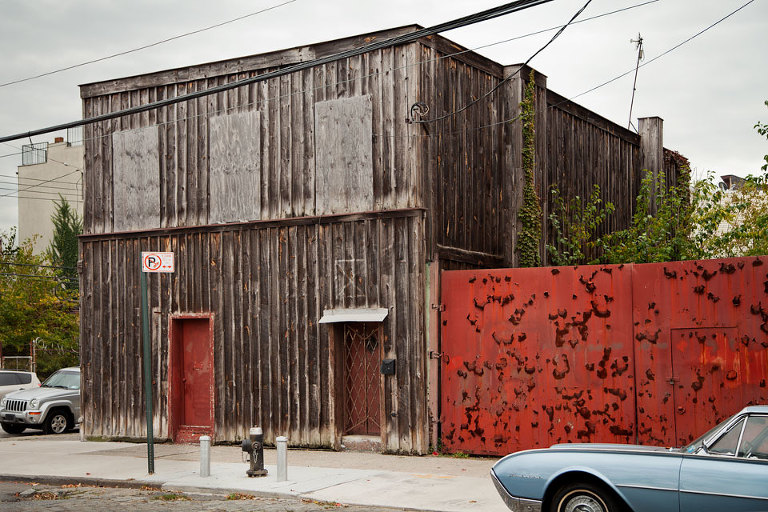 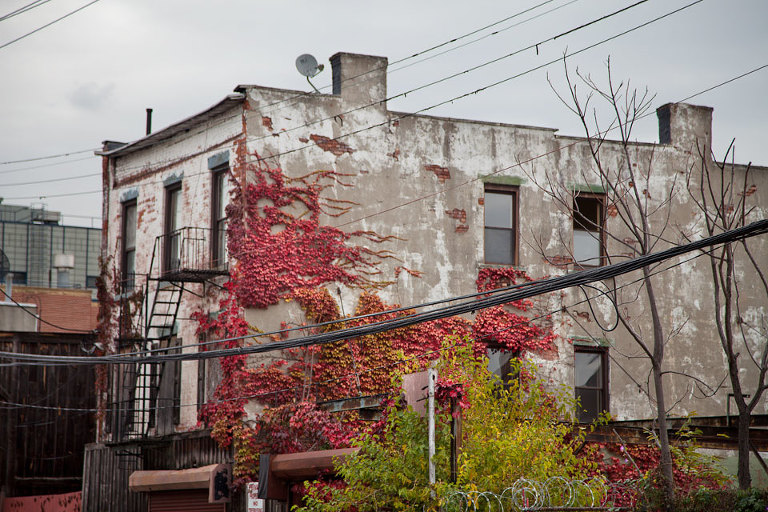 We had a wonderful day in Red Hook – it had a friendly neighbourhood feeling. Just about everyone we passed on the streets smiled and said hello. When we hailed a bus for the return journey to Carroll Gardens, the driver couldn’t accept notes (only coins) and suggested we hop aboard and ask one of the passengers if we could buy two swipes from a multi rider ticket, and then a woman swiped for us but wouldn’t accept payment. As we got off, another woman smiled and said “have a good one”.