In the morning, we bought coffee and muffins from the petrol station and drove to the lookout over Mullewa. After reading the displays, which contained interesting information and great photographs, we went to the Visitor Centre located in the art-deco style Town Hall for advice about where to see wreath flowers (Lechenaultia macrantha). Friendly staff marked the precise position of the flowers on a map, and advised us to see the flowers early. Although I try to avoid backtracking wherever possible, we decided to see the flowers near Pindar, and then return for a mid-morning tour of two buildings designed by Monsignor John Hawes. We headed east on the Geraldton-Mount Magnet Road toward Pindar, and turned left off onto the Berringarra-Pindar Road, and about 10km north of Pindar, exactly as described there were “three wreath flowers here at the fork in the road, go along the left road, and return along the other road and you’ll see a lot more.” Wreath flowers can grow up to a metre in diameter from a single central point, with stems growing outward like wheel spokes; the largest of these were about 50-70cm. 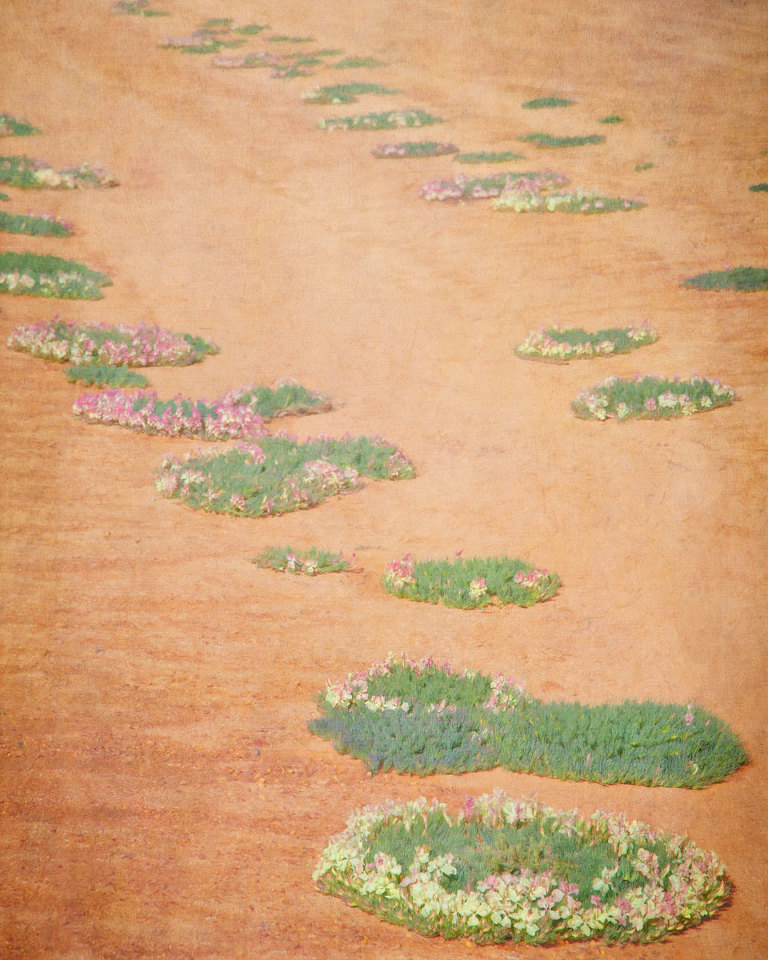 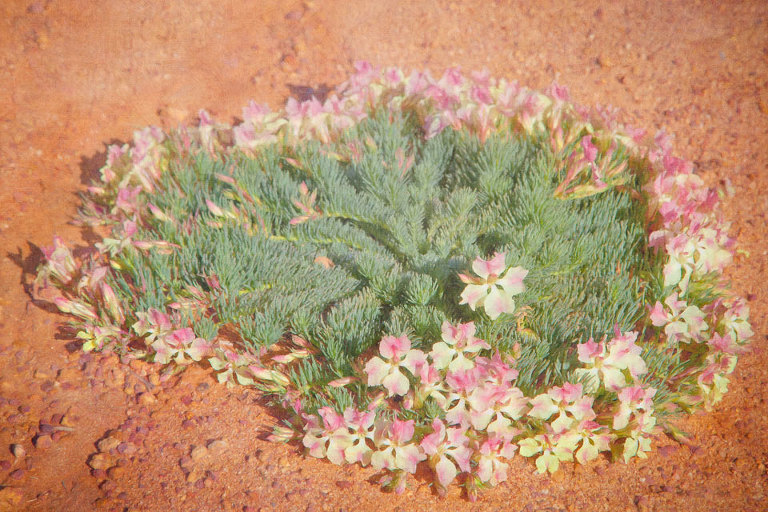 Amongst the wreath flowers was a Ricinocarpos velutinus plant with slightly furry silver grey stems and narrow leaves, with small yellow flowers and larger furry yellow fruits or seed pods. 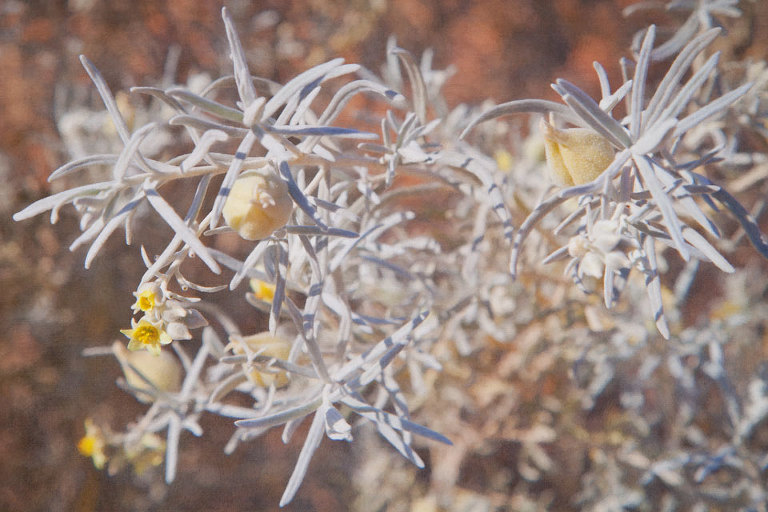 We returned to Mullewa for the tour of the Church of our Lady of Mt Carmel (1923) and the Priest House (1927) designed and largely built by Monsignor John Hawes. Unfortunately the tour guide was attending the Mingenew Expo, so there was no tour – we walked around the exterior, but couldn’t visit inside. 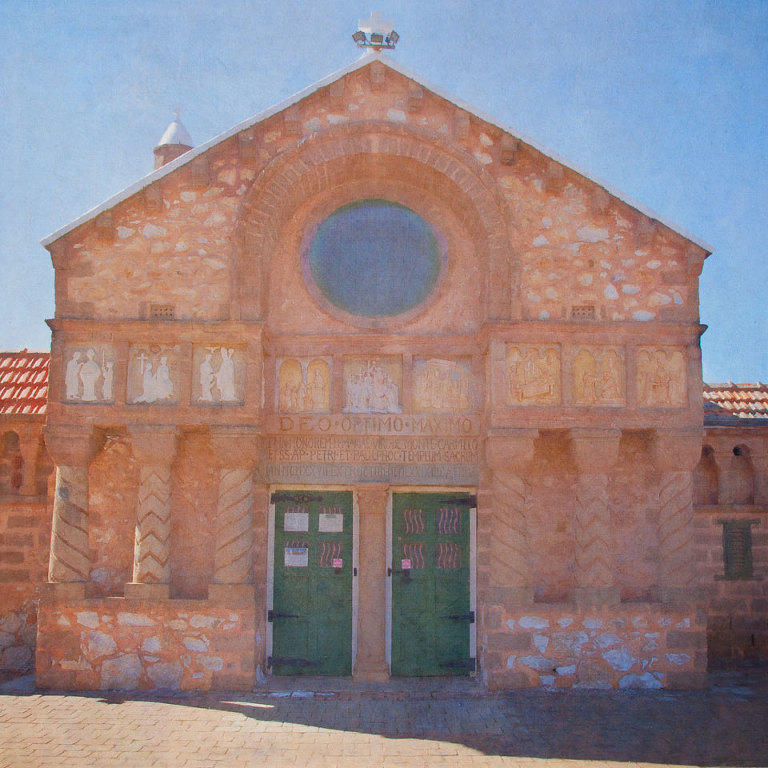 Double doors on the western side of the church 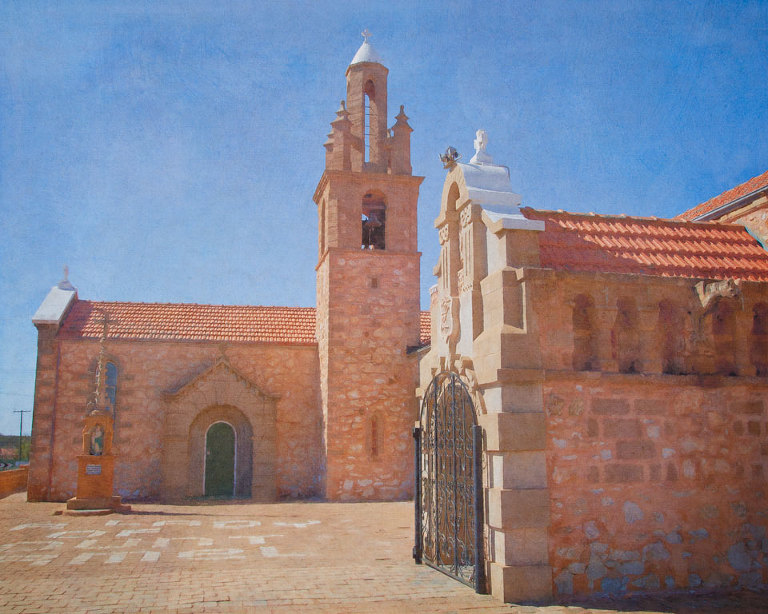 Bell tower, gate, and gargoyle – the front of the church viewed from the western side 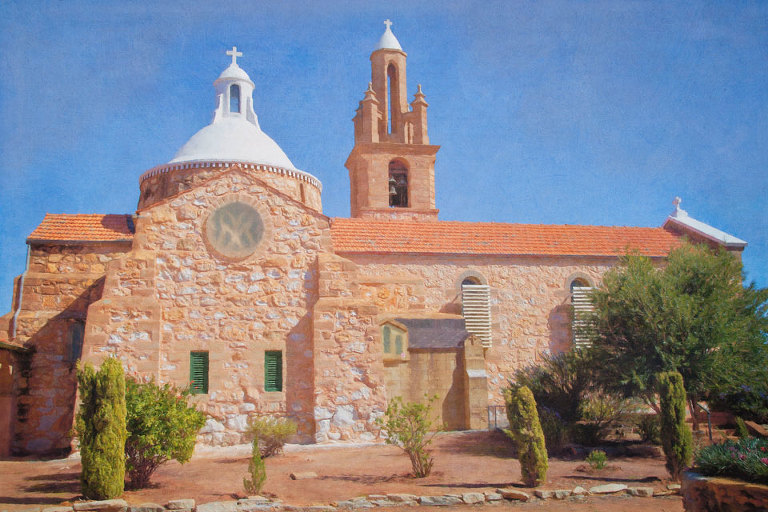 Our Lady of Mount Carmel viewed from the eastern side 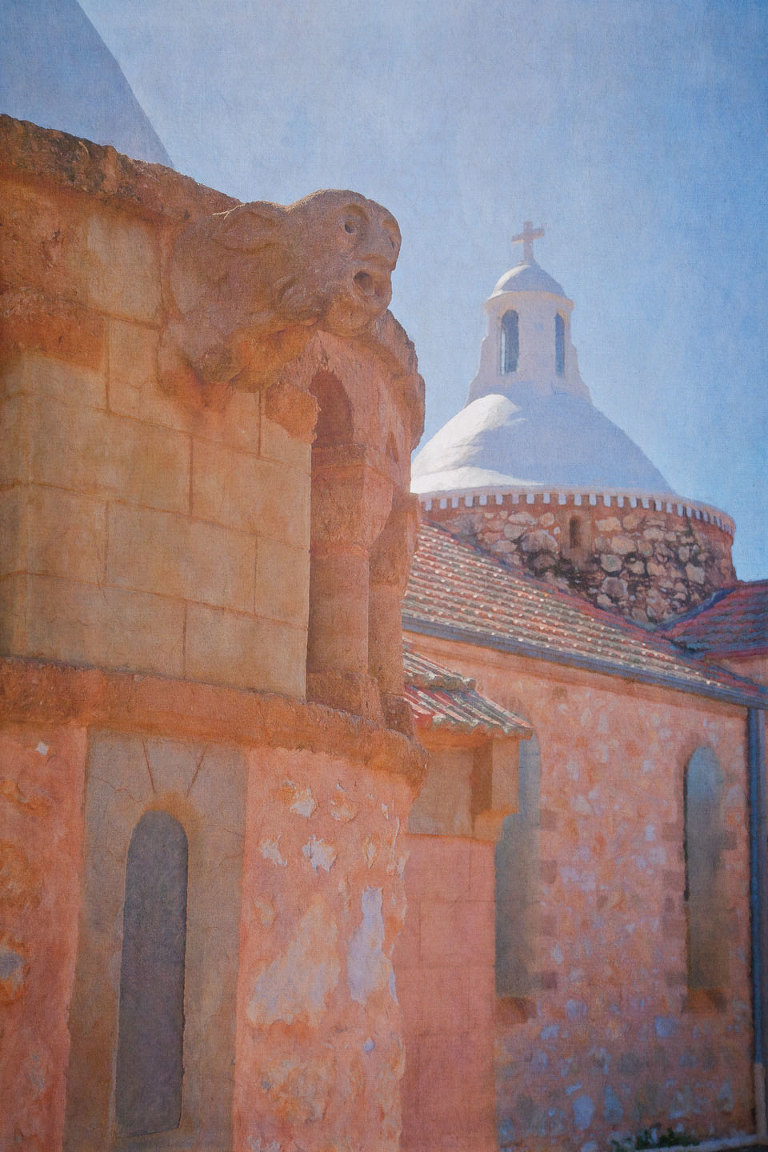 Gargoyle on the Church of Our Lady of Mt Carmel 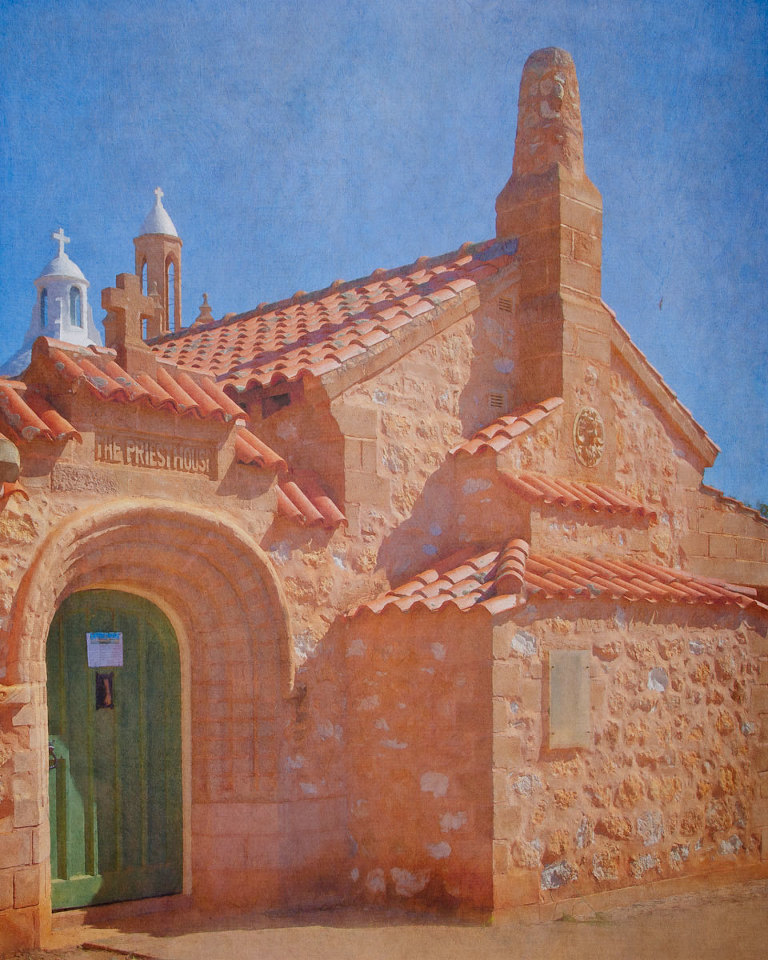 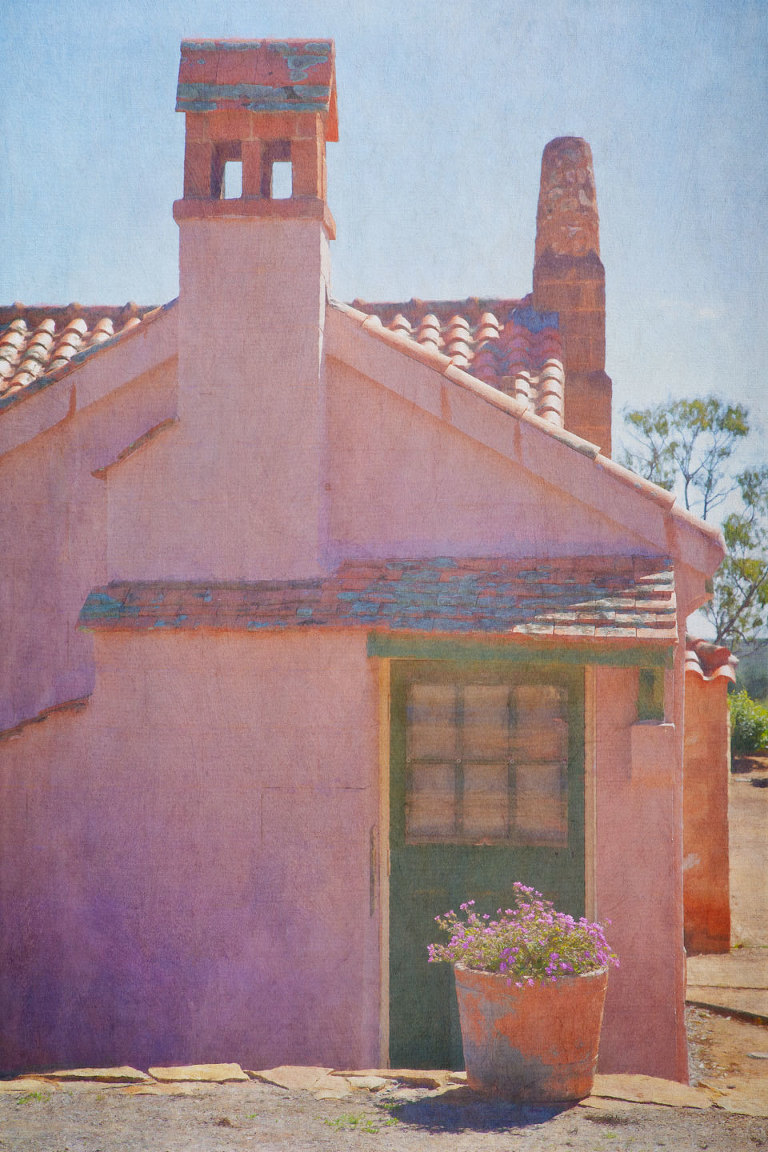 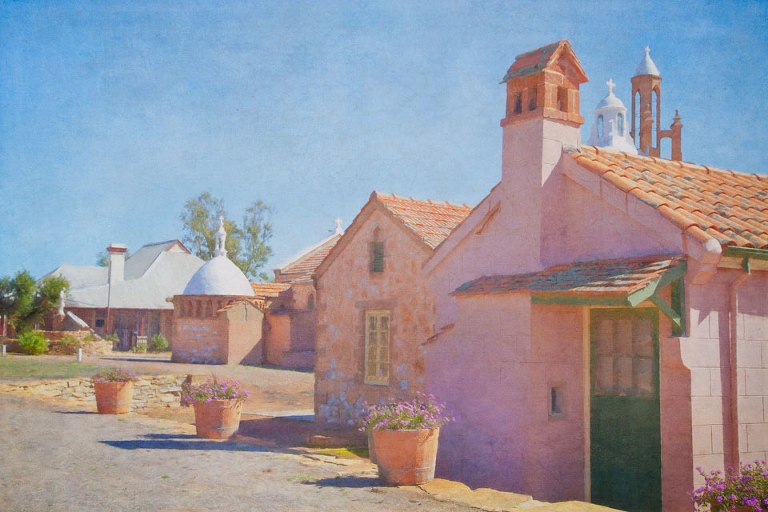 Priest House with the domes and spires of the church, and one of the school buildings beyond 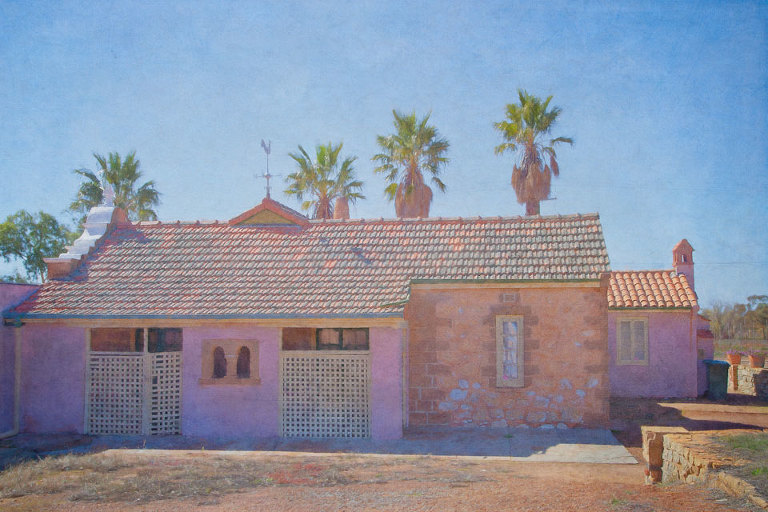 We saw more everlasting daisies here, in the planter at the front of the Priest House, than anywhere else … 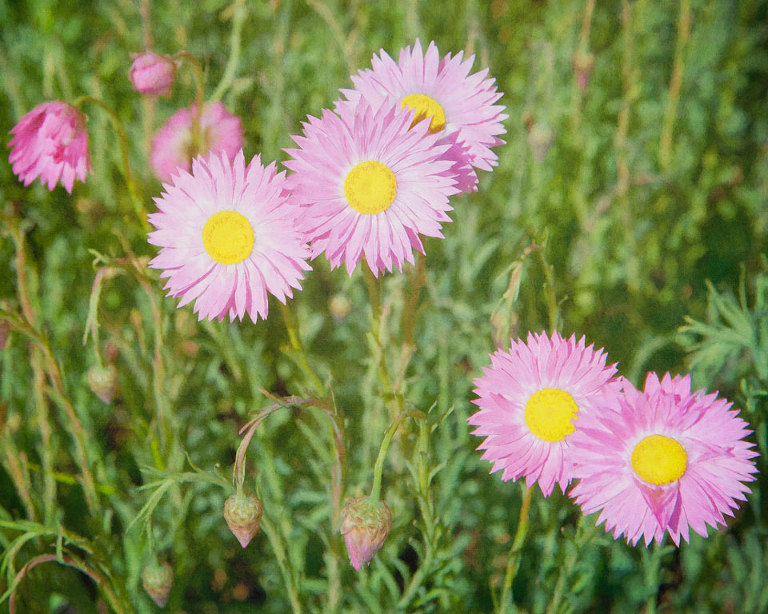 We retraced on path, east along the Geraldton-Mount Magnet Road, and stopped at the heritage-listed two-story stone Pindar Hotel (1901-75), now a guest house that serves delicious house made scones and jam and offers a cosy fire. 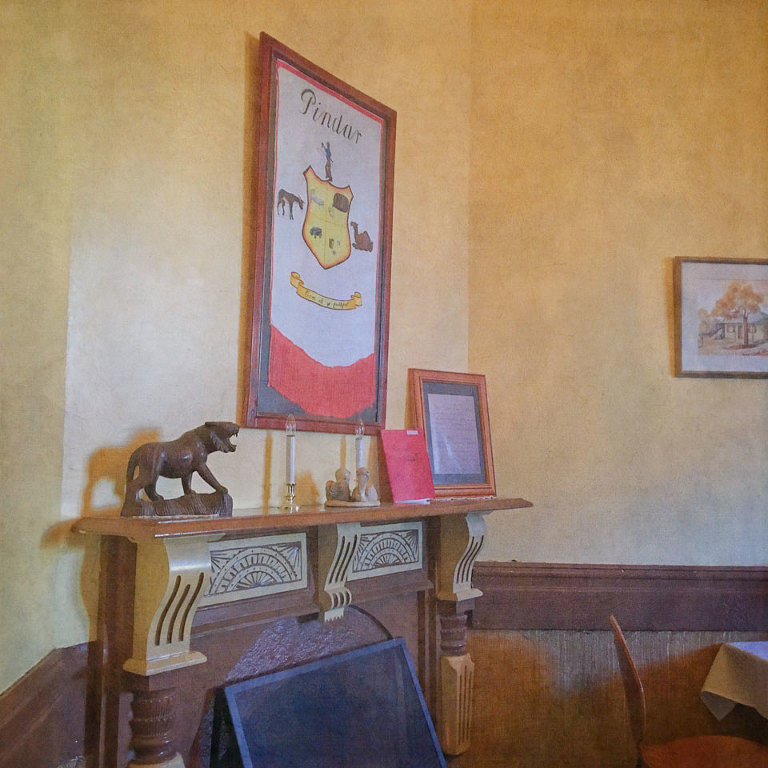 Yalgoo – “where the outback begins”

We spent a short time in Yalgoo, looking at some of the town’s architectural highlights. 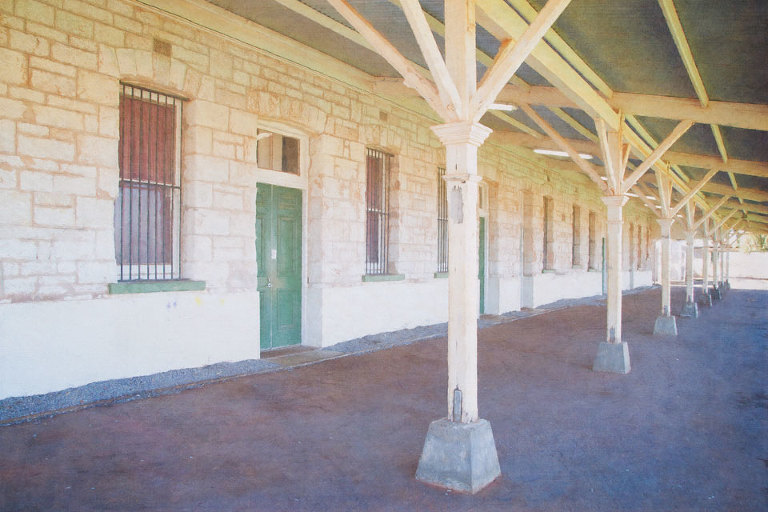 Yalgoo Railway Station – the largest on the Murchison Goldfields line, which closed in the 1970s

From Yalgoo, we continued east to Mount Magnet, and then north on the Great Northern Highway across Lake Austin, an ephemeral salt lake that rarely fills with water, to the island in the lake where the township of Austin (1895-1910?) was once located. Nothing remains of the township that once had a railway station, post office, hotel, and gold battery. We had a car picnic in the rest area on the island. The landscape and vegetation was similar to that of Lake Ballard, just north of Kalgoorlie in the Eastern Goldfields.

South west of Cue, on Lakeside Road off Great Northern Highway, are the remains of Day Dawn, once a significant mining town with a population of 3000 people. Gold was discovered in Day Dawn in 1891, and the amount of gold uncovered was a key factor to justify the extension of the railway into the area in 1897. Great Fingall Consolidated Gold Mining Company operated the mine from 1898 until 1918, when it closed. The abandoned mine collapsed in 1921, and the town disappeared by the 1930s with all buildings in ruins except the abandoned Great Fingall Mine Office (1902), which is heritage listed. The  building perches 5-15 metres from the edge of an open cut mining pit. The building has been damaged by rocks as a result of blasting, and the ground on which it stands is unstable. Vandalism and exposure to the natural elements over the years have also damaged the building. It is fenced off and boarded up. 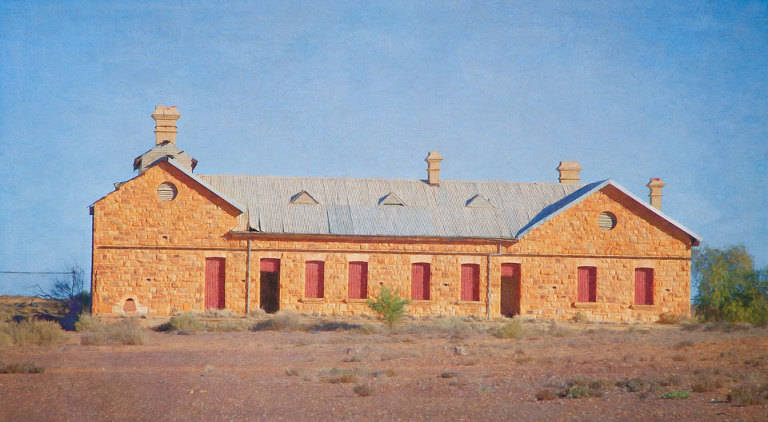 The Masonic Lodge building on Dowley Street, one street back from the main road, is the reason I wanted to visit Cue – I’ve wanted to see this building since I first saw a photo of it as a teenager. Built in 1899 of timber and corrugated galvanised iron, with a pressed iron interior, it is the largest free standing two story corrugated iron structure in the southern hemisphere. Once this type of building was common in goldfields because the building materials were relatively light and easy to transport by camel train. Now it is one of the few remaining in Australia. At first glance, and from a distance, the finely corrugated iron on the front of the building looks like stone, while the corrugated sheets on the sides, back, and roof is coarser and more obviously iron. 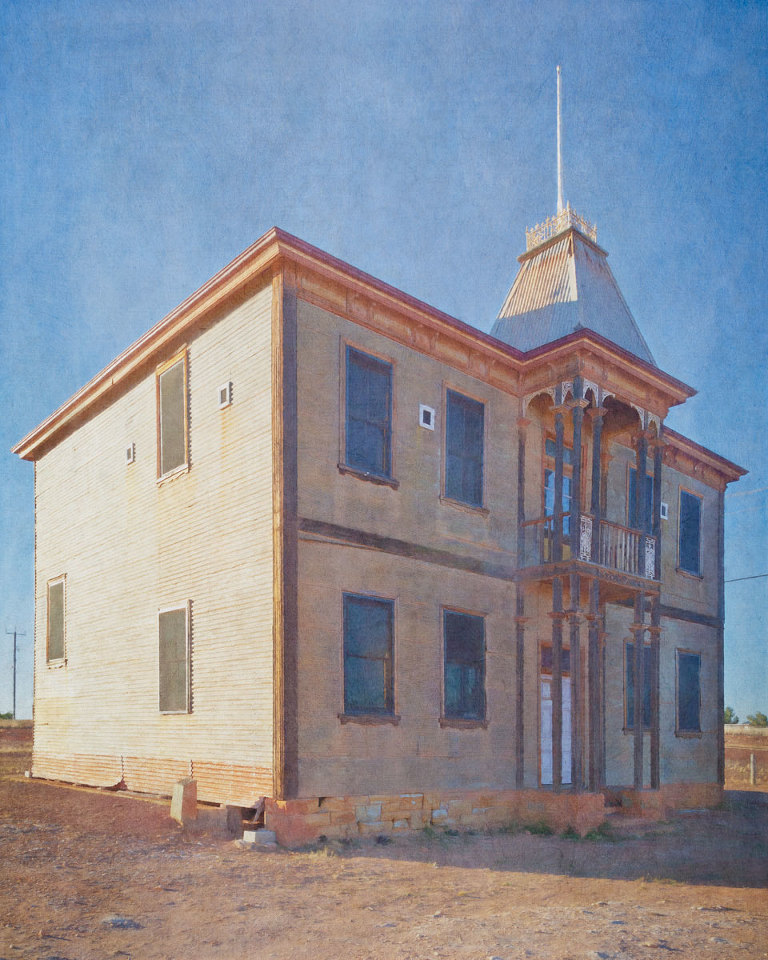 Radio Tower Hill is just north of the Cue township and provides sweeping views over Cue, the nearby mines, and the surrounding landscape all the way to the horizon. 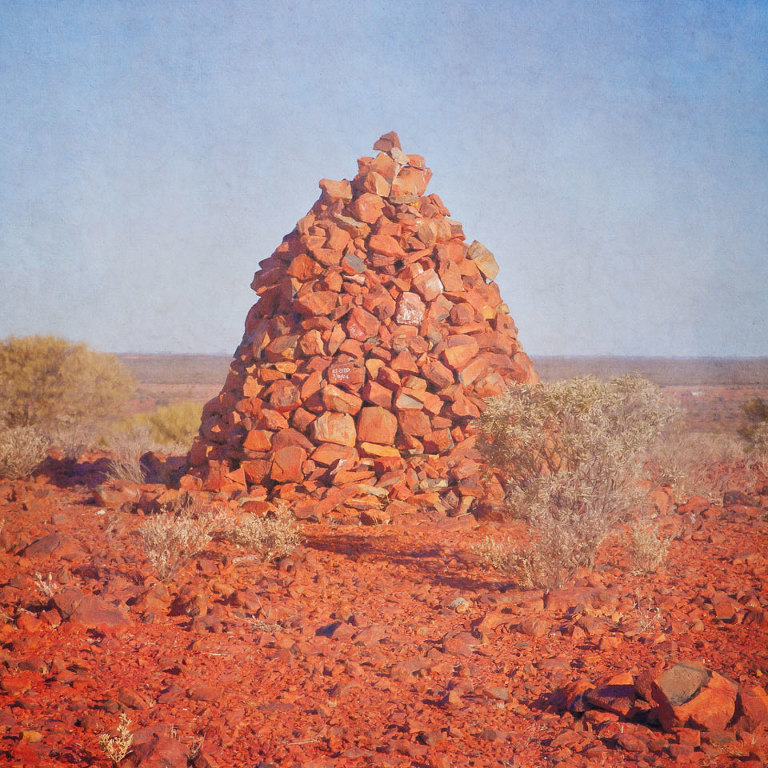 Horizon beyond the cairn on Radio Tower Hill, Cue

In the main street of Cue, there are some beautiful buildings: the Government Buildings: Post Office, Court House, and Police Station; the Bank of New South Wales, and the Cue Shire Office (once the Gentleman’s Club). In the grounds of the caravan park is the Old Gaol and a row of corrugated iron Pensioner Huts. Along the main street, the row of shops with their deep verandahs were empty, but in one of the windows there was a sign advertising:

We stayed at the Queen of the Murchison, which was a country pub built around 1940, but is now a guest house and cafe with clean comfortable rooms, shared bathrooms and sitting room, and generously sized servings of delicious home cooked dinner, and buffet continental style breakfast eaten in the dining room. Sitting around the fire after dinner chatting with the hosts Joyce and Daryl and their other guests was one of the highlights of the trip.