I woke early and was unable to get back to sleep, so I opened the light-blocking curtains and window, and looked out over the wet treetops and streets below. It was very quiet, apart from the occasional chirping of birds in the trees in the grounds of Sensō-ji. The temple gong sounded once at 6am – such a peaceful way to start the day. I rearranged our things to prepare for the cleaning staff. Once Brad woke, we ate breakfast in the hotel. It was a buffet style with a selection of Japanese and western dishes.

We planned to explore Jindaiji and Kichijoji, two neighbourhoods to the west of Tokyo, after buying tickets for a trip to the Mount Fuji area at Shinjuku Station.

The rain was heavier and more constant than yesterday, and there was more wind, so it was squally and cold. We walked to Asakusa (Tsukuba Express) Station. When the first train pulled into the station, it was packed full of people, and I balked because I couldn’t comprehend how another person could fit into the carriage. I couldn’t imagine being crammed in to such a crowded space. We mentally prepared for the next train and moved further along the station (because the later cars seemed slightly less crowded). When the train arrived, the doors opened, and we joined the crush. It was shoulder to shoulder, commuters united in uncomfortable transit. Most passengers appeared to be asleep, even those holding roof straps, and they swayed in unison with the movement of the train.

We caught the Tsukuba Express to Akihabara Station on the Yamanote Line (5 minutes, ¥210), and then the Chuo/Sobu Line for Nakano or Mitaka to Shinjuku (18 minutes, ¥170). Shinjuku Station was breathtakingly crowded. Fast-flowing streams of people shuffled along their routes, and we joined in, it felt like being part of a vast swarm: keep in line, keep up pace, keep to the left so others can overtake you.

We were given incorrect directions and wandered around the multi-level station until we found the Odakyu Sightseeing Service Centre (on the ground floor, near the west exit; open 8:00-18:00) where we waited in line to book a Fuji Hakone Pass and bus tickets to Kawaguchiko. We checked where the bus for Kawaguchiko leaves Shinjuku Station, at the south gate.

Then we searched for the Keio Line/Station (located under the Keio Department Store, on the west side of Shinjuku Station) and rushed to catch an express train to Chofu. We arrived at Chofu Station in 18 minutes.

From Chofu Station, we followed Google Maps north to Fudaten Shrine (650m). In the grounds, we watched as a woman washed her hands and mouth. We acknowledged each other. There was a metal statue of a cow with its nose rubbed shiny. We admired the beautiful details of the building but didn’t take photos because there were signs saying ‘No photography! This is a place of worship!’ It was clear that it was considered really offensive to take photos in some places. I asked for a shuin which seemed to surprise the female shrine attendant, but she smiled when she gave the book back to me and waved an Ōnusa (ritual purification wand) over it. 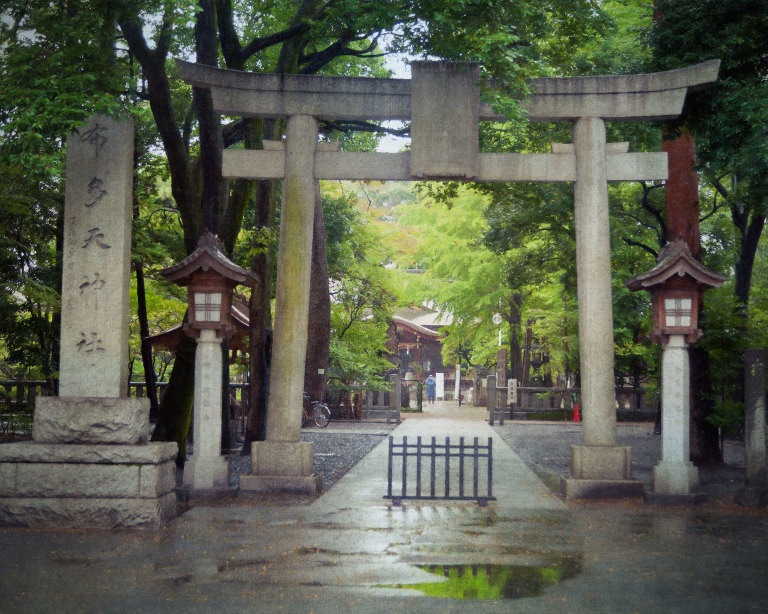 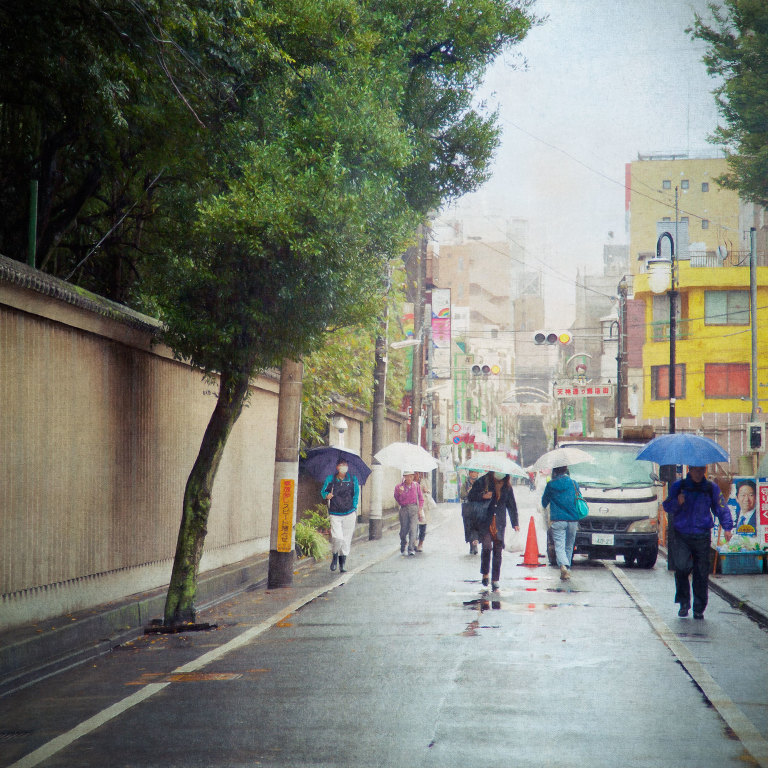 Then we returned to the station to catch a bus to Jindaiji.

Jindaiji is famous for its fresh soba and peaceful temple complex (open 8:00-17:00), which was founded in 733, and is the oldest temple in Tokyo, after Sensō-ji.

We caught the bus to Jindaiji (a 15-minute ride through leafy suburbs) from Chofu Station North Exit, bus platform 14, Keio Bus Cho 34 or Kichi 14 for Kichijoji Station, 8 stops to Jindaiji, ¥210.

The clear water in the region is credited for the quality of the soba, made from buckwheat, which apparently grows better than rice in the area and has been the primary grain grown for about 400 years. Buckwheat is ground to flour in mills, turned by the streams of running water. There are probably over 20 soba restaurants in the hamlet around the temple. However, when we arrived, most of them were shut, and huge puddles covered sections of the road, so the place didn’t look particularly welcoming or worthy of the trip.

Thankfully, Suzuya (鈴や), the first restaurant in the street (on the right as you face toward the temple) was open. The staff were friendly, and they offered hot fresh handmade soba noodles and a dry comfortable place to rest. Brad had Sansai Soba with cooked sansai (wild vegetables, beans and mushrooms) placed on top of the noodles in broth. I had Tsukimi Soba (translation of Tsukimi is ‘moon watching’ and hence, Tsukimi Soba has a raw egg supposedly to resemble the moon) on powdered seaweed on top of the noodles in broth.

After the soba, we walked to Jindaiji Temple . The temple is on a hillside, so you climb stairs to approach it. The thatched temple gate had plants growing in it along the edge, and on the inside of the gate, the entire thatched roof was embedded with plants. I asked for a shuin (there were three to choose from). I was flustered and handed the book the wrong way up to the monk. He ceremoniously turned it the correct way, entered the shuin, and handed the book back, after passing it over smoke. We returned to the gate along a hilly pathway, then left the temple grounds and walked to the left, along a street lined with pottery and food stalls, mostly closed. 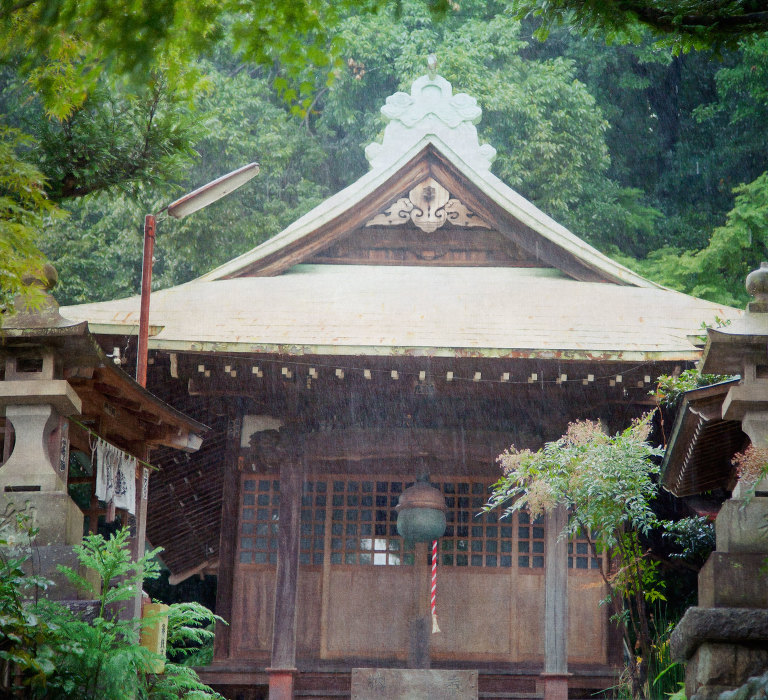 Along the main road I felt more comfortable to take photos, because we were away from the religious area. The vegetation was incredibly lush, and as we walked around the neighbourhood under umbrellas, it was easy to forget we were in Tokyo city, just 30 minutes from Shinjuku Station. 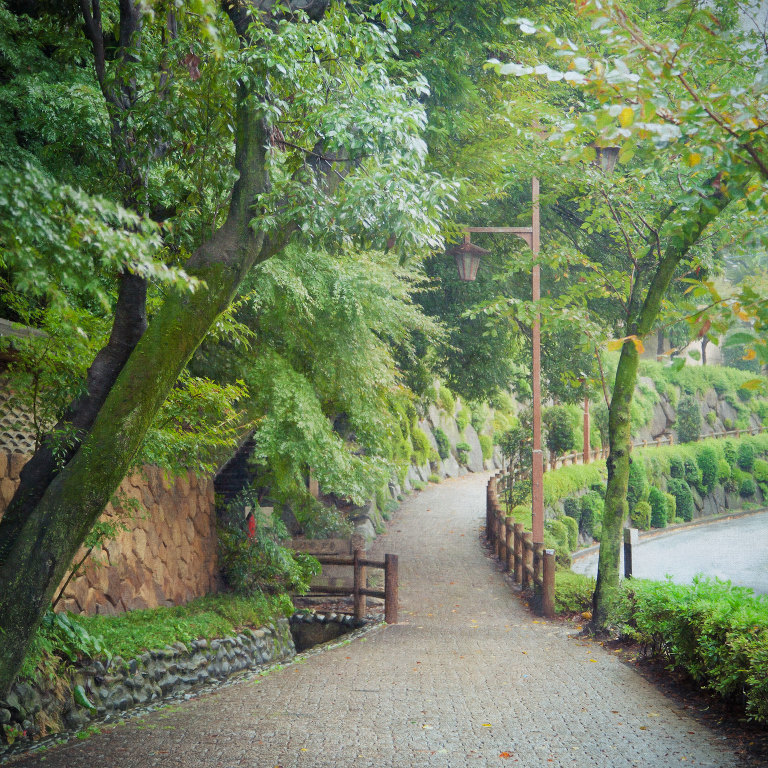 Because of the rain, we decided not to visit the nearby Jindaiji Botanical Garden (open 9:30-17:00; ¥500) even though it was the Autumn Rose Festival.

Back at the bus stop, Brad noticed that the bus to Kikochiji (our next destination) didn’t stop there, and we didn’t know where to catch the bus. Brad approached a group of young people, who didn’t speak English but were very friendly. When one of them found out we were from Australia, she laughed and pulled a pack of Tim Tams from her bag. They helped us find the bus stop we needed and then waved and laughed as they went on their way.

We boarded the bus toward Kichijoji, which is consistently voted as a favourite place to live by Tokyo-ites. The bus passed the Studio Ghibli museum (open daily, 10:00-18:00) which houses works by anime creator, Hayao Miyazaki. Tickets must be purchased in advance, but cannot be bought online. We got off a bit further along the route, at Inokashira Park Zoo, which specialises in animals indigenous to Japan; ¥400 (20% discount for foreigners). I wanted to see the mandarin ducks that are bred at the zoo, but unfortunately the zoo was closed because it was Monday. So we crossed the road and walked into the magnificent Inokashira Park and walked around the lake, lined with cherry and maple trees. It was beautiful and the tree canopy provided some shelter from the rain. 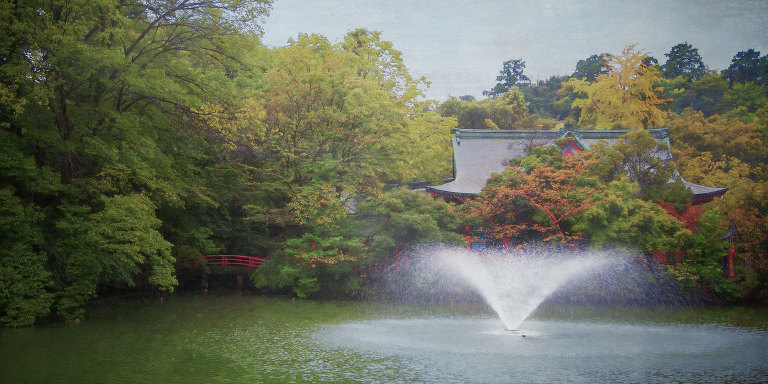 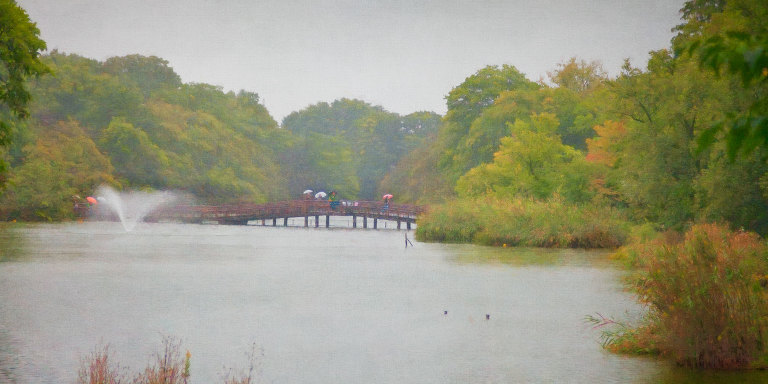 We walked over the bridge toward Iseya Sohonten, a yakitori restaurant, first opened in 1928, on the left, at the start of Nanaibashi-dori. I was looking forward to trying the grilled meat and corn on the cob, but disappointingly it was also closed, so we continued north on Nanaibashi-dori toward Kichijoji Station.

We had planned to eat dinner in the area, but the combination of unrelenting rain and thwarted plans resulted in us feeling a bit dejected, and so we decided to return to Asakusa, and the comfort of our dry hotel room. From Kichijoji Station (Chou Line) toward Tokyo, it was six stops, about 24 minutes to Kanda Station, ¥390, a 25m walk, and down an escalator to the first floor, a 30m walk, and up an elevator to the second floor, a 21m walk to Platform 2 (Ginza Line) toward Asakusa, five stops, about 8 minutes to Tawaramachi Station, ¥170. We walked to the hotel, dried ourselves, and rested briefly before returning to the area near Tawaramachi Station to Asakusa Sushiken. We were shown to a traditional low table on tatami matting, there were western settings with chairs as well, but we thought it would be good to try something different. The meal was beautifully presented and delicious. 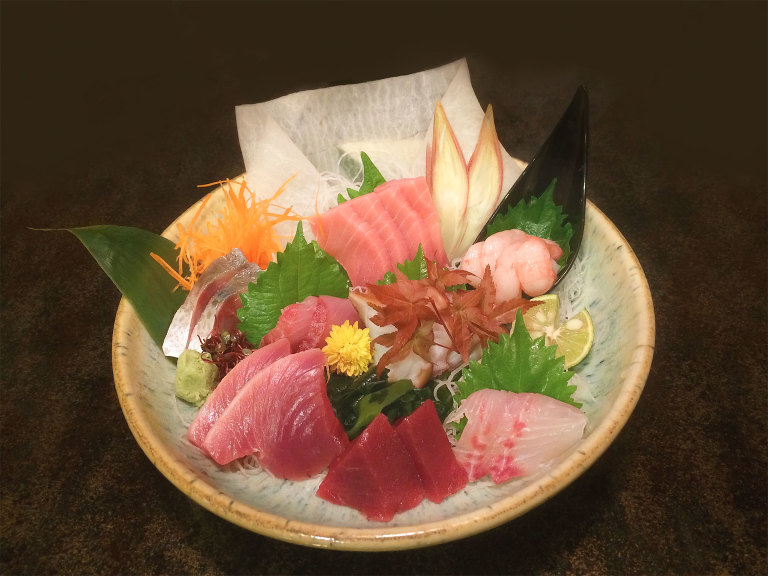